Surf holding in the waist/chest high range... waiting for more

Nothing spectacular today but still damn fun. There's surf- nothing over chest high but it's just been so glassy and nice. This is a different time of year for me to be here, typically I'm down in summer or spring this is my first winter trip. The water's mellower- not as stormy/crazy as the summer and the evenings are comfortably cooler. Different weather but same mosquitoes!
Posted by John Ashley at 6:33 PM No comments:

I love coming down here. I've been down enough times that I've made friends with some of the local people and I have to tell you, it makes a huge difference. When you pull up and you see a familiar smiling face and you're greeted with, "I was wondering when you'd be back... Merry Christmas!", it just feels good. The wave may not be the greatest but when you can come back to a place that you feel good about- when you see people that truly make you feel happy- it's worth it. I love this place.
Posted by John Ashley at 6:26 PM 1 comment:

Always the same... the night before is a pain in the ass!

I'm always up way too late the night before a trip. No matter how much I plan and coordinate there's always a million things to be done and the list doesn't seem to get shorter. Here's a big one- fins. When you know you're going to ride lots of waves (for long distances) you start getting ideas. You decide you're finally going to try out all the different fin combos you've been holding all year.
At least that's me- I have all these beautiful fins I've been dying to let run and damn if I'm going to leave any of 'em at home. So a biggy on the list is to narrow down the fin quiver- I really, really can't bring them all (my bags too heavy already). Check the shot below, that's my short list- tell me who you'd cut. You see it's a pain in the ass- it really is (BTW: thank you Future Fins for making this conundrum possible):
Posted by John Ashley at 11:28 PM 2 comments:

Every year it's the same thing here in Southern California: The surf get's good but everything else get's cold. I know we're soft compared to you guys who are paddling and surfing in the ice and snow, dodging mini icebergs and cracking icicles off your nose hairs but, shoot, cold is cold and when it's 40 degrees on the beach here in San Diego, the best thing to do is head south.
We're fortunate to have a couple escape valves. The biggest one is our southern neighbor. For me, Baja is just three exits down the freeway, cross the border and you are basically on another planet. The rules are different, the language is different and everything is just a touch more wild- I actually feel a little more free down there than I do here in our good old United States of America (don't get me wrong I love this country and would never trade residency. I'm just saying that all the rules, regulations, codes, paddling zones, lawsuits, nanny-state bureaucratic nonsense has really taken away some freedom from us. You don't know that until you hit a spot like deep Baja where the thinking is that if you're dumb enough to try riding a motorcycle drunker than a skunk and you run into a cow and kill yourself- it's your own damn fault. Don't even consider trying to sue the rancher.... wow, I think I just got off on a little rant). The feeling of loading up the 4x4 for a three week surf mission down past the Tropic of Cancer never get's old for me. The surf gets cleaner, the water gets clearer and, almost magically, you're back into an average daily temperature somewhere in the mid-seventies. Warm is good, and you get that in southern Baja.
This year, I'm trying something a little different. I'm heading even further south down into mainland Mexico to my little surf hidey hole. The spot is one I've written about before- it's basically a goofy foot fantasy land. The wave isn't exactly a high performance dredger but it's such a long, fun ride that you don't exactly care if you're battling grannies on long boards for a couple runners. I've surfed it Spring, Summer and Fall but not in December so I'm excited to see how it looks this time of the year. The only thing cold down there are the margaritas other that it's a big, warm surf playground a few quick hours (by jet) to the south.
I don't know how you guys and gals in the really cold regions stay sane- maybe you just dream and plan for the summer. For me, I look forward to Christmas Break and when that last Friday bell rings, I know what I do, I head south- maybe you should too.
Posted by John Ashley at 9:43 PM 1 comment:

Last year, Tim Hatler's La Ventana Classic pulled in close to 18k dollars for the Southern Baja community of La Ventana/El Sargento. The money (click here for more info on where the money goes) funded projects like extra bathroom facilities for the elementary school, a shade structure for another primary school, air conditioning for the students as well as new infrastructure for the local clinic, trees and paint for a local playground and a foundation for the new police station. This year, Tim's shooting for even more money- hoping to bring improvements to even more parts of this Sea of Cortez fishing community.
If you've got the opportunity and you'd like to race your stand up board in a beautiful setting for a great cause (and get in some kite or windsurfing) you've got to get down there for the Classic! This year the 11 mile Isla Cerralvo to La Ventana Crossing- the main event for the contest- is drawing some serious competitors. There's rumors of a Vela/Appleby two pronged attack- which will undoubtedly present a major problem for the three time crossing champion, Mark Field (aka Kiwi) of Imperial Beach. Click here for specifics about the races.
Regardless of the level of competion, there's always loads of fun planned for the whole three day event. This year Tim told me he's going to bring back the Lucha Libre wrestlers with an appearance by the small people wrestlers... what??? There will also be reggae bands, high level kiteboarding competitions, food, dance presentations, sunshine, sand... and plenty of cold beer. Sign me up.
Posted by John Ashley at 3:57 PM No comments:

There are still secrets out there...

And I'm going to make it my job to figure them out. On moto, stand up board or 4x4- one way or another I'm going to get there. Here's a couple shots to fire you up too:

Woke up this morning to clear skies and cold water. The wind was out of the north east which means it's offshore- pretty typical for us here in the winter time. Offshore winds clean up the surf and usually make it hollow- so if you're a tube rider, you get fired up on these kind of days. I'm a little out of commission with a screwed up left hand but that didn't stop me from checking out the clean surf at the end of the road. It looked so fun- too bad I had to head home, tail between my legs and roll out the lawnmower. Next time. 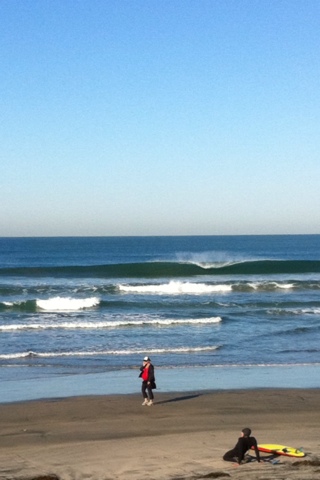 Posted by John Ashley at 9:13 PM No comments:

You know it's good when all the usual faces start showing up. 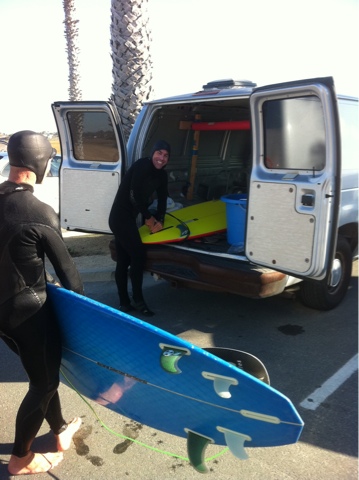 Posted by John Ashley at 9:01 AM No comments: