I was a dog lover but now I've crossed over into the land of dog-weirdo... and I'm okay with it. I love my little Lilly.

This is the guy who makes all my boards:

Check out this killer shot: 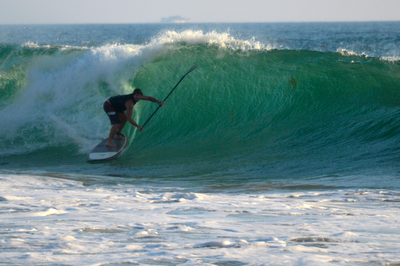 This is the kind of stuff I like to see: forcing the stand up paddle issue by surfing sucking up, partially closed out, meaty, Southern Orange County beach break. Real surfing. Here's what Will had to say about it:

"Hobie 8.6... Kinley broke his Nectar here on a different day. Once, I got pinned to the bottom for a fifteen count. Lucky for us it's a sand bottom but sand can still break your neck. You can see me starting to unweight the front edge here- basically a survival move. A big toe's worth of pressure on that front inside rail and you pearl up to your ballzack, then it's a face full of sand and you get flexed into a pretzel. My home break, love it!"

The more raceboards start looking like canoes... the more I want to race in the surfboard class.

Time's have certainly changed. It wasn't too many years ago that your choice in production stand up paddle boards came down to exactly two: The very surfable, but brutally narrow (a relative sliver at 26" wide) and fully banana-rockered Mickey Munoz UltraGlide or Sean Ordonez's super versatile, cleanly shaped 11'11" Big Red. That was it. Really. Sure, there were local shapers popping out a custom board now and then but if you wanted to grab something off the rack and get out on the water that afternoon you were stuck. Fast forward to, oh say, yesterday and there I am walking through Costco eyeballing a full stand up paddle package, institutionally wrapped in super-cling plastic, paddle and all. Time's have changed all right, SUP boards are everywhere and they are easy to get. But being "able to get" and "being able to surf" are two different things- and I had to ask myself if the two requirements could ever be met; are there great surfing production boards?

That was the question that popped into my mind when a friend at Bic handed me a couple of boards for review. I was told to thoroughly and completely abuse them- and oh, yeah- surf 'em too. Frankly, the construction of the boards was just plain weird- I had instant doubts about their surf-ability. These boards are made differently than anything I'd seen out there. The 10'6 Ace-Tec (Advanced Composite Engineered Technology) is shockingly light which is a total surprise given the fact that the board is completely wrapped in a plastic shell! My traditionalist, surf board sensibilities were ready to write the thing off as a freak. I was sure that there was now way that a board like that could perform at an acceptable level. But, as with many things in life, I learned that there was more here than I had first thought.

First of all, I learned that the board's core is ultralight, non-water absorbing polystyrene. Did you catch that? The foam blank does not absorb water and it's way lighter than the foam conventional boards are shaped from. That shaped core is then wrapped in fiberglass wetted out with epoxy resin, this is exactly how conventional stand up boards are glassed. Here's the big difference, the final layer is a thermoformed plastic coat that is a virtual suit of armor for the board. Additionally, the process of thermoforming the plastic coat, sucks all the other layers down onto the foam core and almost perfectly bonds them to it. The result is a board that is frickin' ridiculously tough. Don't tell Jimmy or Mark, the Bic guys, but I actually plonked a couple of softball sized stones on them to see what would happen... result, a big bonging sound and rock bouncing off the deck... no ding- wow!

I surfed the 10'6 a few times over the course of a couple of weeks. And, the ultimate challenge, I released them to a class of sixteen year old high school newbies. The kids surfed them along what would normally be considered a surfboard death trap, a cobble stone lined point break. My impressions? The 10'6 is a nice, all-around shape that is surprisingly spry for it's size and width (31"). In high tide, shore break surf I found it to be a smooth, predictable performer with plenty of stability in the chop (again, thanks to it's ample width). Importantly, and surprisingly,  the above average width doesn't take away from the boards surfability.

This is a board that will put a smile on a lot of faces- especially if you are new to surfing and want to transition into wave riding without the frustration of falling every couple seconds. What I really liked about the board was the foam distribution from tip to tail (technically called the board's foil), the 10'6 is nicely bladed-out, pulling thinly towards the nose, which lowers the volume and weight there. Foiling the board that way allows you to swing it around nicely on cutbacks and bottom turns. It's like swinging a bat, if you've got the 5lb warm up doughnut on the tip of the bat, you're swing is slowed way down. Now switch to a light weight aluminum bat and you're able to swing much more quickly. The same idea applies to stand up paddle boards. Swing weight is typically a weak point for many production boards, they seem to be so uniformly foiled that their nose weight is excessive. The result is a board that comes off the bottom like a dead pig. The Ace-tec constructed Bic 10'6 is so light and stiff that it almost springs out of turns- I'd love to give this board a shot in lined up point break surf where I could really get my legs into it and jam it down the line.

Like, I mentioned before, the real test came when fifteen of my students fought over the boards at a local cobblestone pointbreak. These were kids who were new to stand up paddling. Once again, the width of this particular model is a real winner when it comes to beginning stand up paddlers. You should be aware that the width of a stand up board is vastly more important when it comes to stability than the length. This is a board that, through its modern construction methods, is able to come in at a very light weight while still maintaining a comfortable width that provides loads of stability. I had complete newbie paddlers cruising the point and even paddling into a couple of small waves. Best of all, when the board got away from them and went bonking over the rocks, I didn't have to worry about the board getting completely torn up (in fact, the board looked brand new even after a two days of total abuse). The thermoformed, plastic armor definitely stood up to the board eating teeth of that rocky point.

Who should buy this board? Well, I sure as heck would not mind having this, or even the 10'6's larger brother, the 11'6" Ace-Tec in my lesson quiver. These are very stable, light, bomb proof boards that could be used both in the surf and in flatwater and with that tough plastic skin, they'd hold up in a rental/lesson environment. Who else might want an Ace-Tec? I think a beginner/intermediate paddler would get a lot of mileage out of the 10'6 version of this board, especially if you were thinking of transitioning into stando surfing. If you've got access to a spot like San Onofre's Dog Patch, this board would be the ticket- the length would give you the board speed to get into those slow rollers and the shape and weight would allow you to whip that thing around.

If you get a chance to try one of Bic's Ace-Tec boards, definitely give it a shot. I think you'll be, like me, surprised at just how well this particular modern production board performs. This may in fact be the chimera of the production board world; both accessible and surfable- what's not to like?

Home For Kids in South Africa: HOKISA fundraiser this Sunday, May 20th... be there!

Come help raise money for homeless children in South Africa. I'll be manning the bar at the event this Sunday, May 20th, 11am - 3pm. Sushi and wine will be served. Be sure to check out the silent and live auctions for gift baskets. All donations go to the children of HOKISA in South Africa, this ain't like the Red Cross, we're not using the money to build new corporate parking spots... grassroots baby, grass roots! Get more information about HOKISA here. 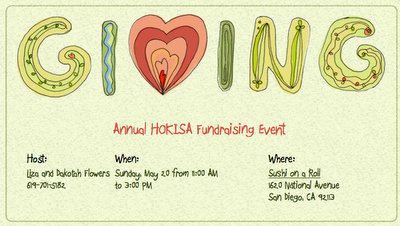 I get these text messages from my friend SK. They are incomprehensible most of the time. I love them. Every time I get a doozey from him it cracks me up. Lately, he's been in Vegas. I'll get shots of the Venetian with messages like: "Thanks for tip craps table bombay saphire yes good call not gonna pay". I'll write back, "Wait, what?" and there will be no reply. Even better is when he sends me shots of stand up paddling in Puerto Escondido courtesy of Angel Salinas and crew- he just sent this one: 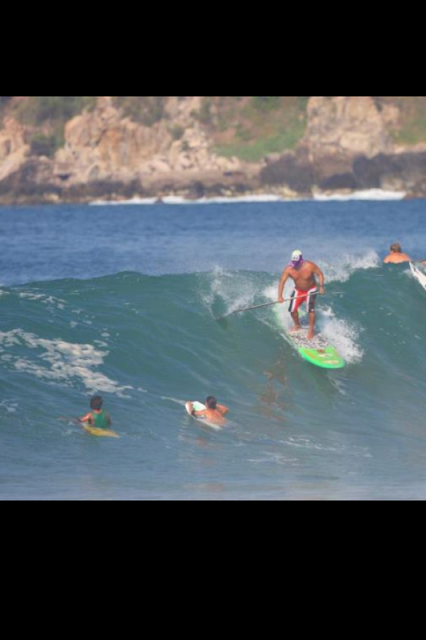 His accompanying text: "What Euro trash isn't". Huh. Love those cryptic babblings. I'll write back, "Wait, what?" and there will be cricket chirps in reply. Or he'll send more of those shots- let's hope for more photos.
Posted by John Ashley at 5:28 PM No comments:

Whatever happened to, "Thou shalt not steal."?

That was the central question going through my head as I was gut shank-snaked on a little left peak by a North County shaper with a Jesus dove on his board. Now, I'm all about forgiving and forgetting but heck, I didn't even get a playful over the shoulder, I'm-gonna-rip-you-off-just-cause-it's-small-out-here nod. I'm used to getting cut out like that, that's an easier burn to swallow. No way, this was a stone cold assassin move. It had been practiced. Maybe perfected. At Cardiff.

Or maybe he just thought I was going right.
Posted by John Ashley at 5:36 PM 11 comments:

Bombing it up North: Surfing Patch then checking out the Paddle for the Cure

Hook up with me. I'll be surfing DogPatch early Sat. morning then jamming over to Newport to have a gander at the Paddle for the Cure (as well as say Hi to some paddle friends). Ask about the Mystery Cooler and sample it's magica contents (hint: there are no protein drinks, coconut water, or Monster Energy drinks in there... unless they can be mixed with the Kraken!). See you there!
Posted by John Ashley at 12:29 PM 3 comments: