Mikey's Board Room: The Stand Up Experience

Back in 2006 I was living on the Big Island of Hawaii, Kona to be exact, and there wasn’t much surf while I was there. I was cruising around checking the surf at Banyans and that is where I saw stand up paddling for the first time. I introduced myself to the paddler after watching him on a the board for almost an hour and found out that he owned an SUP board company, Hypr Nalu. They were some of the first production boards back then, complete with flashy graphics, shiny paint and what I thought to be some pretty aggressive designs.

Hoping on for the first time was a challenge, it wasn't very wide, under 29” for sure, but I was determined to get the hang of it. I didn’t do much surfing while I was there but I did a ton of distance paddling. If you haven’t been to the islands, the underwater sights are amazing, I was paddling with everything from little brightly colored fish to sea turtles. I fell in love with Stand Up.

When I got back to San Diego 6 months after my first SUP experience, I did my research and found THE SUP guy at the time, Steve Boehne of Infinity Surfboards. Steve had experience building big boards from his days building tandem surf boards and had a great transition into Stand Up in the early years becuase of it. A deal was struck and I came home with a 10’6 Infinity Ku Ku Hoe Nose rider and an Infinity Ottertail paddle. I wish I had pictures of the thing, it was heavy for today’s standards, no handle, constructed bomb proof, and was a tank on the waves, but it was a blast!!! It still lives on at a local lifeguard station as physical training equipment.

Fast forward to 2012, I’ve been on more boards than I can count, seen a ton of different constructions, built boards, been to overseas factories, paddled in amazing places and worked with some great people in the industry. The experiences I’ve had and the contacts I’ve made over the years has turned me on to builders doing great things for the sport of SUP. So I asked John if I could do write ups on all the different boards, designs, and creations I’ve run across over the years, SUP or not, and with his blessing Mikey’s Board Room has been created! 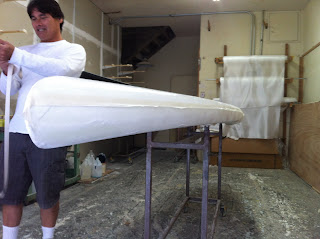 Stay tuned for the next installment of Mikey’s Board Room!
Posted by Mikey at 8:56 AM

digging it John!
Great idea-oh man the good old days already!?
Cant believe the progression of SUP in so short a time.
Jon

Wicked lil story, my introduction to SUP was similar, I had been trying my hand at surfing and one of my buddies told me about SUP and how he had a 14' cruiser, he let me take his out for a paddle and I instantly fell in love with everything about it. Mostly the versatility, being able to surf or cruise calm waters while getting a full body work out when and if i wanted to. I couldn't believe I had found such a gem, i needed to share.. so I opened my own SUP&Surf shop here in Nova Scotia called SumerSalt. Sharing my passion has allowed me to make great contacts and expose SUP to the world.