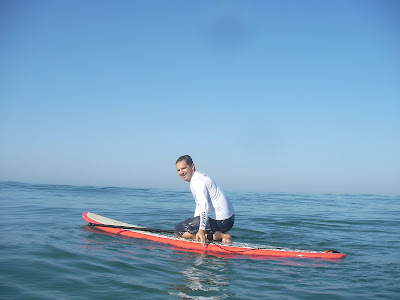 If you live in California, like me, summer's over. I don't mean over as an official designation- but informally, the kids heading back to school after Labor Day signal an end to the long days of easy living . It's simple enough to figure out, just go shopping. Shorts are going on sale, Hawaiian shirts have been stacked on the clearance tables; every surfer knows it's prime time to buy a springsuit. This summer's done, that we know for sure.

Now, this wasn't the greatest summer for surf, off the top of my head I can recall maybe four decent little swells- nothing much over head high, a few surprise wind swells and too many flat days. I guess if you assigned value to this summer by counting only the number of surfable days, you'd conclude that it was pretty much a failure. Fortunately, I think we're a little more multi-dimensional then that. In fact, the more I examine what was done these last few months, the more I'm certain that this summer will be one that I'll ruminate on for many years. To me, this summer was like a dream.

Ultimately, this was the summer of the stand up board. I could not have imagined the places it would take me. For starters, my June trip down the Baja peninsula struck a spark in me. I rode the paddle board the whole time (well, almost the whole time, I did surf once at low tide on my Fish at Cerritos), not as a consolation choice but as a primary board. It was on that trip that I began to realize that this may be what I was meant to surf, this was my glass slipper- it fit (call me Cinderella though and we might have a problem). The trip was magic, not just for the surfing but for the time I was able to spend with my brother, one of the best people on Earth. I got to see him get excited about paddling too, that's something I'll never forget; the birth of his sickness, and it's all my fault. At our age, with our responsibilities, it is a rare thing to be able to pull off a trip of that length- it's one I'll never forget.

Without a doubt, this was a summer of sharing. I can honestly say that in the last twelve weeks, I've put at least thirty people onto my Big Red stand up board (I should be in sales). Some were people I knew, many were complete strangers, some were gnarly locals finally admitting that deep down they too wanted a shot at the fun, one was a grandma, another easing into his first summer of retirement (what's up Jim!), one was my cousin (yes Vinh, in the outside shower you may...) and to be honest, some were just hot girls in bikinis. Different as they were, they all had one thing in common- they were smitten! I know of at least six who've since went out and purchased boards. Sharing is a priceless act, you can't put a dollar amount on the smile spread across a friends face as he paddles back from his first wave on the big board (yup, I saw that wave Steve). My most satisfying "sharing" moment; putting my wife onto a board and watching her figure out that she is an absolute natural at paddling- how cool is that? In terms of spreading the paddle surfing love, this summer was a winner.

This was the summer I discovered that I like to write about, well, stuff. It was in early summer that this paddle surfing blog was born. Talk about taking me to strange and wonderful places! I didn't know that I was conducting my first legitimate interview until I was in the middle of it, and for the record, totally unprepared (sorry Stu, yes it is easier if I ask you the questions- would've been better if I had actually prepared some questions). The needs of the blog allowed me to spend the day watching surfboards being born, enabled me to poach forbidden waves and ride and review equipment that I could never afford (although, upon further study I've found that my reviews fall under the heading of "never met a paddle surf product that I didn't like", got to work on that). The needs of the blog also kept me up way into the morning writing and rewriting articles about such things as rolls of carbon fiber. The late nights were worth it though because this summer I learned that my writing was useful (albeit to a small number of people, but still...); thank you for the useful, constructive and encouraging responses. This summer there was even controversy and intrigue, but that will have to wait for another day, another blog.

As a farewell gift, summer gave us one last nice south swell. The wind and tide decided to work out their differences and gave us a shot at our local spot. We surfed it through the tide change, one good friend (you killed it today Chad) and me. The waves were fun, head high, a little sectiony, some just giving up and closing out- but, to us, out there in the sunshine, the day was a total success. Exactly like this summer.

Top Photo: Another chance to share with a good friend; his first time on the Big Red- the smile says it all, let the games begin!
Posted by John Ashley at 9:14 PM

I echo your sentiments although given the sectiony conditions, my surfboards saw more of our Labor Day weekend SW than the SUP. Even then, I HAD to get a session in on my old 11'0" Infinity and got in a good one with the usual suspects in La Jolla. Definitely love paddle surfing - absolutely essential part of the quiver!

Agreed- can't imagine not having one now. I'm going to see what low tide brings me down here!

A magical summer for me, too! I like what you have to say about sharing and how the stand up board has put new people and opportunities in your path. I've made a few new friends who SUP and we laugh all morning at how awesome this life is and how many waves we get to surf—in our trunks—in Santa Cruz, watching the sun come up, bat rays flying in the kelp... I'm hooked and gaffed and on the boat.

Hey Mike- agreed, we're all messed up on it. Can't wait to do Baja again! Anybody else in for a REAL stand up adventure?