The Franken-Paddle: I thought I published this August of 2008...

My first mainland Mexico surf trip was in August of 2008. I woke up early the first morning, beat everybody to the lineup and snapped my paddle in half on the first wave. Welcome to mainland... good thing I had a back up...er, oops- no back up paddle. So here's what I did:

Franken- as in Frankenstein, the monsterous (yet misunderstood and strangely gentle) patchwork of cobbled together human parts that was large, strong, gnarly and unfortunately for that dude, not flame retardant. This was the name I gave to the eight pound beast-paddle that I pieced together after my shaft snapped on my first (yep, FIRST) wave at the point. Check it out: 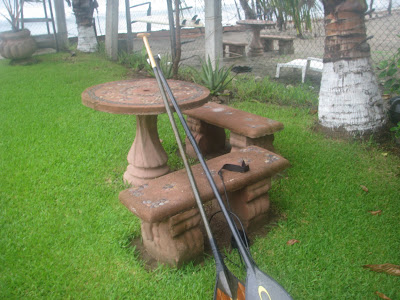 A normal paddle (thanks Duffy!) and the Franken-paddle to the right of it. Notice the twist and knob on the shaft. Kind of like those x-rays of a femur trying to reconnect itself- this is where the shaft snapped. I jammed a piece of black steel water pipe inside of the shaft from the handle to the blade and wrapped the two pieces together with a whole roll of electrical tape. The folks at the hardware store told me I had to buy the whole twenty foot long piece of pipe- they don't sell just 74" of the stuff. I gave the guy two bucks to cut it short and handed them the rest of the pipe back as a regalo (gift). Gringo loco! 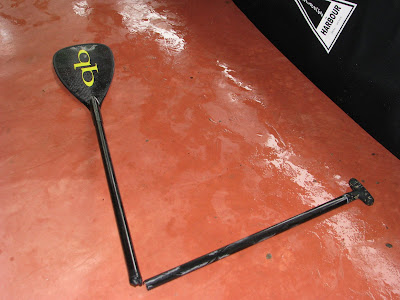 This is absolutely what you don't want to see if you've just arrived on a firing point break and were too stupido to bring a back up paddle. The break was no fault of the paddle's- I should've packed it better. The failure didn't come as I was paddling out with it, or even cranking on it to get into a wave. The snap came as I was leaning on the paddle on a long, open face bottom turn. I think the shaft must've been nicked - and I've heard it before, if carbon fiber is compromised- it'll snap on you. I'm definitely going to buy an exact copy of this paddle for daily use, same brand and all- the thing is the best I've used so far, paddles great and is featherlight. I'm also seeing the need for a hard case just for paddles. I've only seen soft cases out there- a hard case that could hold three or four paddles would be a great piece of equipment, especially if the manufacturer could disguise it to look like a fishing pole case. Fishing gear travels at no extra charge!

Check out the photos below. I actually thought about jamming a piece of driftwood into the shaft to act as the handle- but that snapped instantly. I finally ended up buying a PVC plumbing piece and wrapping it with tons of electrical tape. Bingo! Game on! 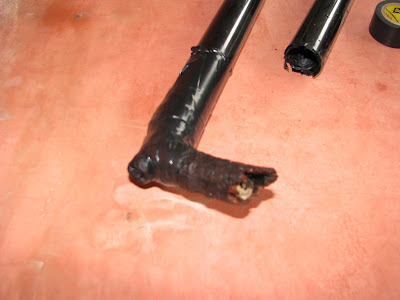 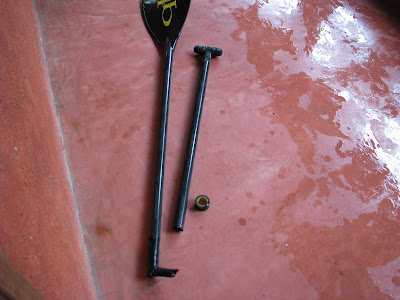 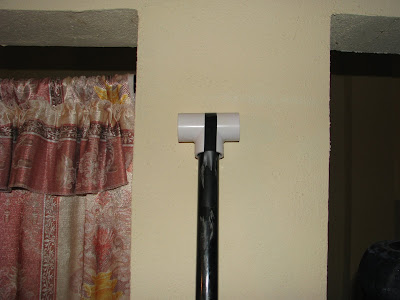 The Franken-paddle was sooo heavy- but it worked and that ended up being one of the best surf trips I've ever been on. Thanks Franken-paddle.
Posted by John Ashley at 6:00 PM