1st I will tell you guys about Squeaky. This board was built for our crappy average Florida conditions here in New Smyrna Beach inlet. It is meant to grab whatever wave power is there and collect it for maximum speed for maneuvers in conditions that would other wise dictate you just glide and grovel. Curvy fishy type outline, a blown up prone fish basically single wing diamond tail 9" point to point on the diamond. The rocker is low but of spherical design and almost equal nose and tail. 4.5" in the nose and 4.25" in the tail. It has vee nose to tail to add rocker on the rail line and also make it possible to go rail to rail easily. I find the forward vee with the nose widths of SUPs really gets that nose out of the way without going narrower in the nose width. There is a single concave in the nose coming back to the front foot area. Edges are hard from 1' from the nose to the tail. The rails are full. The thickness is 4.675" and for my current weight 190lbs I could take .5-.75" out of the thickness. But it does what it supposed to do it rides crappy waves like no other board. Allowing me to bang the lip cutback and even pull little airs on very weak conditions. It craves sloping waves with a little base to them. It is awesome for our shallows at the inlet. I would love to ride this thing at dog patch, or Cardiff.

Now on waves with a little power it becomes a handful, skipping, sliding, and reacting somewhat violently when pushed up into a pitching lip. I find it hard to keep the board down to its prime maneuvering speed on decent waves with a bit of power. On some powerful waves it feels as if you take off like a bottle rocket shot across the ground hopping, skipping, jumping, and out of control. Its crazy and a challenge. But what a fun little SUP I have been riding this thing quite a bit and its a blast for everyday so so weak waves.
Got the next one on the shape stands already that will be a bit more friendly to some juicier conditions. It will be thinner and a bit more nose rocker and a little less tail width with a winged round tail. It will be done soon. I can't wait of course it will be the first one done at the factory this week as I cannot sleep or do any thing else when I have my own new board drawn out. 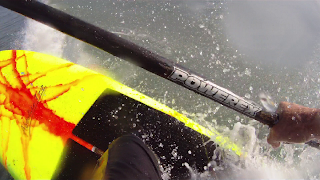 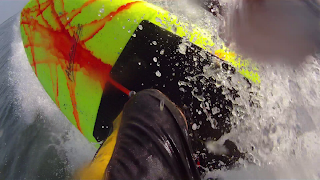 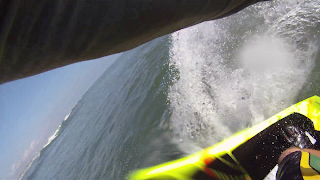 The 8'6" below is made for surf and it handles it like a fine surgical instrument. Seriously Its as if squeaky is a machete and the 8'6" trench bottom is a laser scalpel. I have some time on this board and know it well but from the first ride, first wave on it, I knew it was magic. It will go vertical with ease and really likes steep pockets allowing for some interesting maneuvers and recoveries. The outline is pulled in a bit nose and tail. From the tail to about 3' forward it is almost a normal prone board with a 15.25" tail width round pin. HEAVY VEE all the way through and really heavy vee off the tail, it goes rail to rail better than a lot of prone boards I have ridden. With the channels and outline it is exceptionally controllable and quick to respond to where you want to be on the wave. The reaction time is very quick and responsive.

The rocker is some what extreme even for a SUP. 10.5" in the nose and 4.5" in the tail. It actually is not a even rocker throughout, but kicked in the nose and subtle through the mid with a heavy kick tail last 6 inches or so. Just my way of getting the board to fit on a vertical reentry. Its hard to stuff the nose on this board. Yeah I can say on so so weak waves its a bit slow and hard to get going but what channel bottom isn't. On a wave with a little power it is a dream feels much smaller than it is. If I am getting on a plane to go surf somewhere where the waves are good this is going in the board bag first. 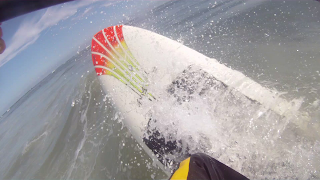 This sequence is backwards but you get the idea... Pic 4 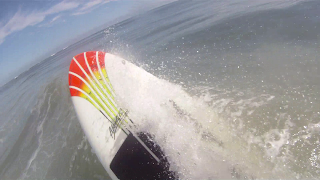 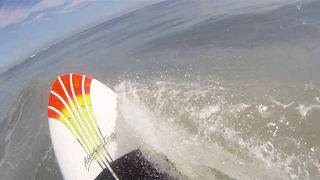 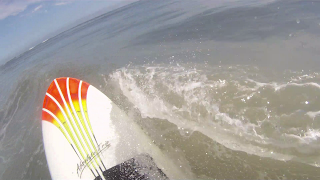 From here go UP. Fitting it in a little late... 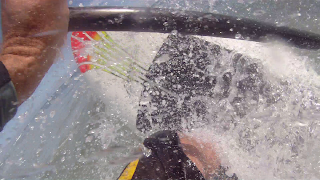 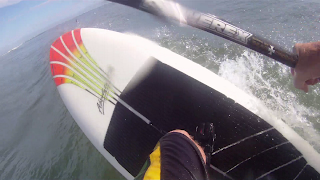 Nice angles on this lip smack... 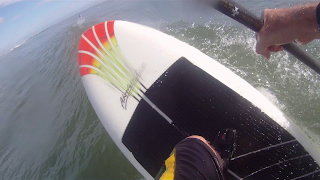 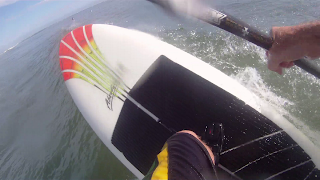 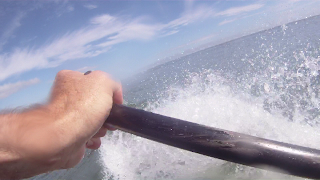 And then Swish and water goes flying. I love throwing CHUNKS!....

I am Really Stoked on surfing SUPs and building them, what a blast... It pains me to see guys and girls struggling with their giant sups out in the surf, specially when they get hit by them. Smaller, lighter, more maneuverable SUPs does not necessarily mean they have to be unstable.. I am not telling anyone this is the way everyone should go with there next board, as there are millions of ways to skin the proverbial SUP surf cat and a lot of good shapers who can put you on the next level. My advice to everyone as a shaper myself is be honest about your overall ability, and clear of what you want the board for and what you want it to be able to do.
Peace and Share the Stoke,
Capt Ron
Posted by Capt Ron at 2:22 PM

I wanted to throw a "BIG" thanks To John for allowing me to post my stuff,thoughts and experiences up on Paddlesurf.net.
Thanks,
Hope to hook up with you one day for a surf and I don't live in a mansion but you are welcome to stay if you make it out here. Although you may gain some of your weight back cause I can cook...
Peace,
Ron Neff