I want to be different, just like everybody else.


I just saw a post on the Surfer Magazine forum. Classic. Titled something like, "Everybody hates SUP" or something like that (by the way, go to that link and check out the hot photos of the SUP guy getting seriously barrelled). There was a reference to a battle between some entitled dingy sailors back east somewhere and the stand up paddlers who were bobbing in the water around their launch/land site. Evidently, a dinghy under sail, coming in for a beach landing with rudder up is eventually going to kill a stand up paddler so the sailors are trying to get SUPs banned from the water. Nice. Would hate to get some SUP blood on Chip's topsiders or tweak a pinky finger in a drastic, full rudder, avoidance maneuver.

In the forum, you can read all the other posts as the SUP hate circle jerk winds up. These guys crack me up- in a sport where individuality is supposed to be admired (if that wasn't the case, Ozzie Wright's style would have had him banned from all surfing ten years ago) they can't stand to hear that one of their very own has gone over to the dark side. I have to salute the contribution by a longtime Oxnard local, talking about his friend, an acknowledged local shortboard ripper who's been dabbling in SUP: 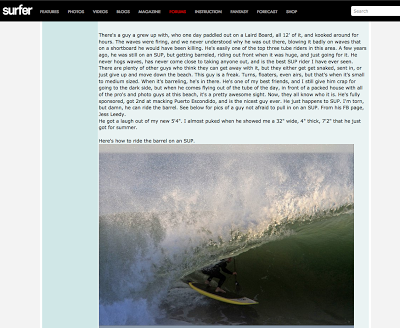 You know what I like about all this? I like thinking about the mindset of the stando/surf guy, who one day decided to give SUP surfing a shot. What do you want to bet that the results of his actions, the unbridled derision of his local Oxnard ripper brothers, NEVER ONCE CROSSED HIS MIND. Ironic in that in a sport and region where the punk rock anthem of, "fuck all of you because I ain't you." was nurtured and germinated ('Nardcore anyone?) - these guys are all confused and don't know what to think about a guy who truly separated himself from the 6'4" thruster flock. For small minds, the world is a much easier place to comprehend when you're, "different, just like everybody else."

I have seen a slow but positive change at my favorite breaks. Young kids (teens) are experimenting with SUP's on either a full or part time basis. I would love for some of the board manufactureres to encourage this trend and sponsor some of these up and comers. It would be a smart move for all of us.

It's the way of the world, John: Enantiodromia, or the process by which things become their opposites. Individualism becomes conformism, freedom becomes orthodoxy, tolerance becomes fundamentalism. Meta, meta, meta, man; first- and second- and third-order derivatives, and it's "turtles all the way down" (and i invite you to google the origin of that expression). Pronie culture is particularly ossified and brittle at present, and screeds like the one you posted are just death-rattles of a no-longer-tenable scene.

SUP is every bit as vulnerable to this kind of rot, though it's hard to imagine at this point in its fresh, green, open-ended infancy. It'll probably be a decade before it slows down (go to Google Trends and search "Standup Paddle Surfing", and you'll see a series of peaks, summer to summer, for the last seven years, with higher highs and higher lows for each successive year, and anybody who says that SUP is a fad in the face of that data is delusional or terminally stubborn. but i digress...)

Me, I'm happy to be participating in something that's green and growing, because prone surfing wasn't; until SUP, I thought my days in a rash-guard were done. It completely re-stoked me. I remember SUPing Dume with Sam George -- former publisher of Surfing -- six years ago, and it was like, "Hey, I won't tell anybody if you don't", but it was so clear that we jaded, battle-hardened lifers had found something new and -so cool- that we really didn't care what people thought.

As for the rest of the world to follow along, well, just like in any pocket of fundamentalism -- Afghanistan or Malibu Pier -- just look to the next generation. The Elders, generally, are terminally wedded to the orthodox postures.

Which is why I feel like Gerry Lopez is such a Miracle Human: I mean, I'm hard-pressed to think of a single person with more cred to lose by turning his back on prone surfing; he's a pronie legend. Yet, there he is, saying for the cameras (and I quote) "Pretty much anywhere you go, you're going to be better off on a standup." If I have half that much mental/moral/physical/ideological flexibility when I hit that age, well, I'll be quite pleased with myself.

Jeff, Thank you for taking Hunter under your wing. He is my Nephew and I am so inspired and proud of all he does. He the best and I love him so much. He is such a kind person and does such a fantastic job in whatever he does.

When the Yeti speaks- I listen. Thanks BY, I promise to find something positive to post... and the more wisdom I hear from G.Lopez, the better.