Somebody turned the switch back to the "ON" position... waves started rolling through this afternoon and the tide looks like it will co-operate for the next couple of days. It's looking like our last two surf days might be fun ones. I'm keeping my fingers and toes crossed. 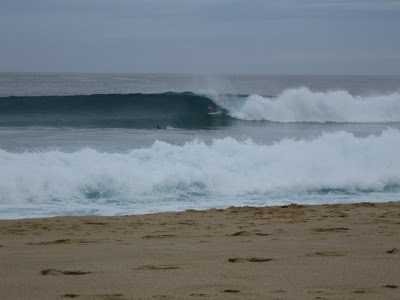 Photo: This is actually not a photo of the surf today, it's from Matt W.'s memory card- but it's so stoke-worthy that I decided to throw it on up. 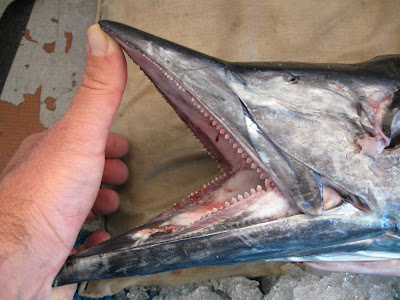 Photo: Watch those fingers. Uncle Russ shows the boys what the mouth of death looks like.

If you don't know, that's the head of a wahoo. Those teeth are like scalpels. No joke. My friend Tim Hatler has speared 'em up to 80 lbs (that's no joke either) and he's told me that it isn't usually when the fish is alive that you get bit. Most of the slices come from a slip of the hand into a dead wahoo's mouth. Most times, the victim doesn't even know they're cut until they see their own blood dripping off onto the floor. Watch it!
Posted by John Ashley at 10:28 AM

Waa-Hoooo!
One of my favorite fish to catch. Have got them off San Salvador up to 175lbs and caught heads of wahoo that went 60lbs. Yeah heads when you hook one the realy big ones bite the one you have hooked and basically lazer cut it clean in half right behind the head. One of the fastest fish in the ocean with burst speeds up to 70mph. Here we high speed troll for wahoo in the spring when they are thick. High speed troll is pulling baits behind the boat at 18-25mph.
Wahoo makes the best Sashimi you will ever have. You will piss on a piece of yellowfin tuna after you try raw wahoo.
Every wahoo on earth has a worm in it that looks like a alien, real freakshow and the only place on earth the worm lives is in the back of a wahoo.
Awesome John! I would not be putting my fingers anywhere near its face even when its dead.
Very good to eat any way you prepare it. Challenge to spear and will make the drag of a fishing reel literaly smoke.

WHOOS YOUR DADDY! Wally be likin the Hoo god eats Fo Sho! Damn guess I will be packin some fishin gear along with the camera stuff huh John Boy??