Lost the Contest: But had fun anyway. 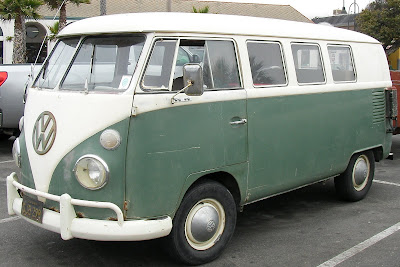 I'm taking a break from finishing the San Luis Obispo piece. I just found out that I lost my first creative writing contest. Global Surf Industries' contest asked surfers to explain in five hundred words, "Why surfing makes my life better". Here's my response, I call it "Misery":


The swap meet guy took my money and gave me two things: a key and a lament, "Lo siento, amigo".

Inside, it smelled like Cheetos, farts and beef jerky. Everything behind the driver's seat was gone. The Mexican had replaced it with gold shag carpet, a battalion of fleas and the nasty fluff of some long dead Chihuahua. The windows were spray painted black. None of them opened. We named her "Misery".

The tranny was sketchy, it popped out of fourth gear. A bent coat hanger fastened to the passenger's seat and looped around the gear shift solved that problem. When the wire broke, Ralph redefined the meaning of "manual" transmission by holding it in gear for five hundred Baja miles. The VW ate gas and oil at the same rate and the starter jammed so often there was a hammer taped to it to whack it free. The fuel gauge was consistent, it always said "Full". There were no wipers and only one headlight but there was a hole in the floor with a funnel and tube. And that was a plus because we weren't stopping until we hit Scorpion Bay.

At Guerrero Negro an empty beer bottle flying out of an approaching truck detonated the passenger side windscreen like a frickin' grenade. On the East road in, Ralph blew a front tire on someone's cast off fender. A drunken llantero fixed it for twenty bucks, eight beers and five precious hours of daylight. Deep into the cervezas, I drank ice melt in the cooler thinking it looked nice and cold; I was right about the cold. We hit the point at 2 am. Ralph slept in the dirt. I squatted in Misery like some disgusting circus freak, my knees jittering as I hovered over two plastic garbage bags simultaneously blowing from both ends. Mercifully, only the fleas stuck around for my grand finale.

But, ask me what I really remember and I'll tell you this: I remember an empty Baja point firing like an overripe habanero, I recall laughing endlessly with a life-long friend and I'll never forget my first bad ass, Baja rig.

Surfing makes your life better- it eases the Misery.

I don't know, maybe a little too dark for the prompt; what do you think? I had fun writing the piece, it reminded me of some fun times. I think most of us have been there.
Posted by John Ashley at 6:44 AM

The Misery piece is great. Submit it.

Thanks Serge- Can't wait for the Dempsey (with a new Stand Up division)!