Northern Baja Paddle Surfing: It's just going to get better! 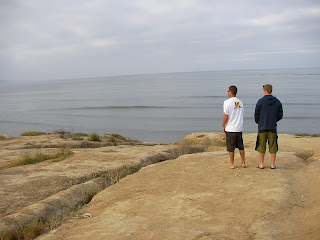 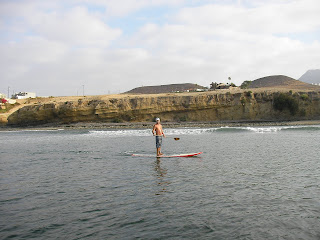 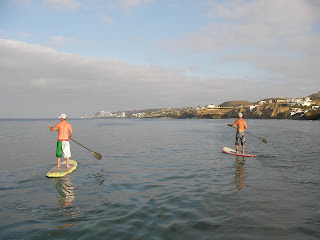 Note: Like the lyric from the song, "Letter from Hawaii" by the Surf Punks: "The names of the spots have been changed to protect the locals". I'm a big believer in adventure- so get out from behind that keyboard and go do it for yourself! And, I've dropped enough clues for you to figure out where I'm talking about anyway- if you think you know, email me at paddlesurfbaja@gmail.com.

There's a couple of spots I've always wanted to surf in Northern Baja- one in particular has been completely walled in. The place has become a gringo fortress and unless you've got the know how to get in, you'll never get the chance to see the perfect little right hand point that's locked inside. And that sucks.

So I decided to do something about it. On short notice I was able to round up two good friends, three stand up boards and a cooler full of beer for a southbound paddle surf invasion. It'd be a stealth mission and like Lieutenant Colonel Kilgore, we were "taking the point".

Thirty minutes past the border put us at our launching spot. I paid my five dollar parking fee and pulled onto a dirt cliff overlooking a mushy right point . The small waves at "Mush Point" looked fun but I knew that somewhere to the north there was a wave that was arguably one of the top three points in the Northern Baja border region; I'll call it the Jewel. So we set off paddling north- not knowing how far we had to go or what the kind of welcome we could expect once we arrived.

The paddle turned out to be an easy 20 minute run up the coast. At the time, there were rumors of a southern hemisphere south swell heading our way, unfortunately the swell was turning out to be a phantom. We made due with small one to two foot waves. But, boy was the potential obvious on that paddle up the coast. I think that with a solid ground swell there'd be at least four or five fun paddle surf spots between Mush Point and the Jewel.

There were three other surfers in the water at the Jewel- the set up was pretty darn sweet- even though the waves were small, they broke pretty flawlessly across a rock shelf. The spot's main event is definitely the clean right but on this particular day, there was a really fun left breaking just north of the main take off spot. As we paddled up the three surfers were definitely not outgoing but they weren't hostile either- it was just a cool reception. I'm always amused by the attitude of gringos in the water at Mexican breaks- I pretty much laugh off any hint of localism by any gringo (expat or tourist) in Mexican waters, their fantasy of possession in a country in which they themselves are foreign is, to me, openly funny. I do, however, respect the claim of Mexican locals for their spots- their country, their spot, nothing more to be said really.

The right was good but since the surfers were on it first, I just passed it by for the overlooked left breaking unmolested in clear, 70 degree water. It was a poach-fest! The three of us paddled and surfed in a continuous cycle of fun. The theme of these stories is becoming repetitive: paddle up on SUB, grab overlooked, vacant wave, surf with just your friends, wonder how this can be happening... repeat.

To be certain, the surf was very small. I am dying to see what that little stretch of rock reef and point will look like with even just a four foot swell- it can really only get better. Additionally, we had just scratched the surface of paddlesurfing in this area- there are many other name spots in the region that host fun waves and their associated non-spots. Undoubtedly, I'll be back for another shot at the Jewel- are you in?
Posted by John Ashley at 4:50 PM

Bro I am in next time. I had to do something with my Dad that day, but next time there is swell, count me in.

You're on the short list- and I'll show you the best taco stand around.

¿Hows that new board?

John,
Is it normal for first time paddle surfer to remain completely sore form head to toe for four days afterward? Should I consult my physician?
_Vinh

That means you're doing it right! Definitely consult your physician and make sure you get a full mental check up while you're at it. Did Eun make pork sushi yet?

john
I think I have seen this spot. I wanna go tomorow AM.
Call me tonight!

Tex- It's midnight and I just saw your comment- I like your family so I'm not going to ruin their sleep by ringing you right now... I will tell you this, I know you've been there before! And now you can paddle it before the wind gets good.