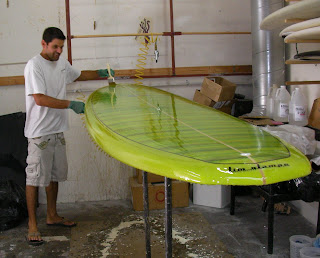 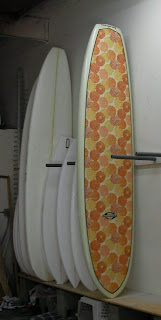 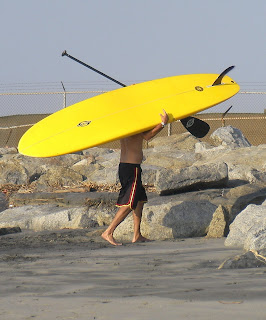 Wednesday ended up being a great day to run up the coast; there was still a little bump in the water, I had an open ended agenda and a full tank of gas to burn.

Leaving home by 5 am, I was able to pull into San Onofre, surf for three and a half hours, eat a ridiculous, million calorie breakfast (try Tommy's in San Clemente. My standard order? A chocolate and peanut butter malt with corned beef hash and eggs- I eat) and still make it to Tim Stamps' shop in Huntington by 1 pm. As if that weren't enough, we were also able to squeeze in a two hour session just before dark at the Seal Beach Jetty- obviously it was a full day.

If you've never been able to tuck into a corner of a shaping bay and watched a surfboard crawl out of a block of foam, you need to fire up your networking skills. Make calls, do lunches; whatever it takes to figure out a way to get yourself into one of those blue rooms, you'll never look at your surfboard the same again.

I got my chance that Wednesday- I was able to hang out, ask all the stupid questions and learn as much as possible from a guy who's obviously logged thousands of hours shaping boards. Tim's been involved in all phases of surfboard manufacturing since he was a twelve year old apprentice at the Harbour shop in Seal Beach- so when he talks about surfboard design, I listen (and when you don't know anything it's easy to shut your mouth and pay attention).

It was funny, then, when Tim pulled out the board that he thought I'd like (it's the yellow board with the black quickblade deck pad on it), I took one look at it and totally disagreed with him. I told him that I'd ridden some ten footers and that in general I kind of preferred the stability, glide and paddleability of the larger (11'6" to 12') stand up boards. Tim's a tactful guy and in his easy manner said, "I really think this is the one you'll like, it's got all that twelve footer pushed into ten feet". So basically, the stage was set- the boards loaded into the trucks and off to the Seal Beach Jetty we went.

I have to say that I was intrigued by the width of the 10'0, most smaller boards that I'd ridden up to that point had been proportionally reduced in width as well as length. Tim had kept a lot of width in the board and the thing had a fat tail- think J-lo not Gwyneth. Who knows maybe the guy's right- there was only one thing left to do.

Well, you knew this was coming: It only took me one wave to know that I will be ordering one of those boards for myself. And, Mitchell, if you're reading this, you know which wave I'm talking about. But, I'm getting ahead of myself, let me first set the stage.

The conditions were technically difficult: we paddled out through the warm water river which was running out to sea against the swell and wind chop creating short interval cross chop- to add to that, the wind was blowing 15 to 20 miles directly on shore (guys were flying 11 and 12m kites outside of us). The surf was knee to maybe waist high and not pretty- some lefts had a little push and some make-able sections but it was otherwise pretty weak.

Tim, Mitchell (a Seal Beach local getting into the "dark side") and I paddled straight into the teeth of that wind. I was really impressed with the paddleability of that board. The board paddled very well. And the thing was stable even for a bigger guy like me- I didn't fall until I had gotten out into the surf and was paddling through waves to the outside. Most boards of this size have been a handful for me when their width is dropped into the 28" and below range. The board was as comfortable to paddle as my 11'11" Big Red- I was liking the thing more and more.

The surf was pretty poor that day, but for what was there and how the board performed, I was blown away. The board didn't have the "point and shoot" feel of the 10'10" Big Blue, this is not necessarily a walk the nose, drop knee cut back type of ride. On The Wave, I dropped into a doubling up waist high left, cranked off the bottom, power banked into the oncoming wall and repeated that drop and pump for about twenty yards ending right in front of the rocks of the jetty. Talk about making something out of nothing! The board felt light, fast and loose- which was odd to me because it was rigged with a 9.5" single fin- and I didn't think single fin boards could feel like that.

Here's my conclusion: If you're thinking about moving down in size from the board you started on, get yourself to a shaper who's made a few boards and has the experience to know how to build a board that's customized to your shape, size and weight. For me, some of the production boards in the 10'0" range are too narrow- the board Tim's built here seems to be just perfectly proportioned for its size. It's for this reason that I know that there will always be a place for the full custom, hand shaped, paddle board- one size definitely can't fit all, especially if you're eating million calorie breakfasts like me.

I can tell you with 100% certainty, one of these boards is in my future- check one out if you get the chance! 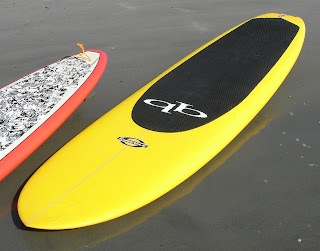 Also: You may have noticed the flowered stand up board (top right photo)- that's a custom stand up board for Tim's wife Linda who's become a paddling junkie too! Go Linda!


And: Tim's glassing a green stand up board (top left photo) that is a refinement of the yellow board I liked so much- who knows I may 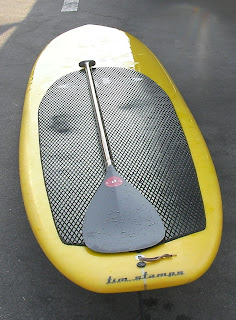 be driving back up to Tim's shop soon to test another board. Bummer.

Finally: Maui shaper Jimmy Lewis will be here in San Diego at Cardiff Reef with some of his new boards Friday, August 3rd- go check 'em out!
Posted by John Ashley at 10:59 PM