Mainland Mexico: Get Up, Stand Up; Mexico Style Part II

Get Up, Stand Up; Mexico Style Part II
by Mike Garmon

At the risk of having the “wagging finger of shame” swung in my face and being called selfish, I am not going to identify the spot with exact locations. I have been encouraged by those that visit here not to do that. However, as with stories and tales of surf travel go, it’s somewhere on the mainland of Mexico, not impossible to find and with a little imagination, creativity and sense of adventure, you could probably figure it out for yourself.

In this group of guys I was going with, several of them had been down there several times in the past. For Brad, I think it was his 6th or 7th time, so clearly he had an advantage and had an upper hand on local knowledge of the breaks, which was blatantly obvious as the pictures will show him shredding on a Paddle Surf Hawaii 9’-6” All Rounder!

Although there were 10 of us on the trip, only two of us were stand Up Paddle Surfers. I started out on a 12’ Wave Master from Australia about a year ago. It was a good paddling board, but killed me as I attempted to get into the surf line. After struggling with that one, I got a C4 Waterman which my bro Brad was on too. But a funny thing happened at the C4 Waterman demo day at San Onofre. Brad rode some dude’s Paddle Surf Hawaii board, and that was it. We now both ride what we believe are the best and most well made/designed SUP’s on the market. Check out the line of new boards at www.hoenalusocal.com or for lessons and demos connect to www.paddlesurfhawaii.com for all the info. Here you can see me getting into one on my 10’-6” All rounder…..Thanks to Blaine Chambers for the killer designs!

Traveling with SUP’s is pretty much the same as with regular boards, paying special attention to being extremely polite and courteous to the counter people. We flew Alaska Airlines into Mazatlan. Alaska Air is pretty cool, although their rules dictate no boards longer than 115” and no more than 100 lbs, with a one way fee of $75.00. My Paddle Surf Hawaii 10’-4” all rounder measured 124”, so I was paranoid they would stop me from shipping it, but there were no issues, and according to Brad, the same was true for last year. I pretty much just wrapped the nose with my neoprene paddle shirt, removed the fins, (get a Wonder Bolt, there worth the $10.00) duct taped a towel around the tail, put 2 paddles into my Dakine paddle bag and zipped her shut. It’s only about 2 ¾ hours on the plane, and when we arrived, there was no damage to any of the 20-25 boards that we shipped down there. As far as board bags go, I like and use the Ocean & Earth Stand Up Series bag. One of the reasons it is so cool, is the strap is heavy duty, good padding and it unzips all the way!

Getting through Mexican customs takes about 45 minutes, and is no big deal. You are immediately greeted by a couple guys from the surf camp, and they literally take your boards from your tired shoulder and get them to the pretty nice (for Mexico) Mercedes Benz A/C tour bus.

My dad would think this is par for the course, but we were not even in the country for an hour yet, and what do you think happened? Think about it, we’re now all pumped to get to the surf camp, unpack, and get ready to surf tomorrow early. We’re in the bus, pretty much in the middle of nowhere on a toll road outside of the main city when we get, you got it, pulled over by the Federales! It’s a funny story personally, because back in the day, my folks would let me take the motor home to Baja, and every single time I would get pulled over at the San Ysidro border crossing and get sent to secondary inspection….only to continually disappoint the INS dudes.

Anyway on this episode of "As the heart pounds now"I could see the car at the bottom of the hill hassling some other motorist, but we went right on by. Then, in about 1 mile from there, sits another Federale, and he motions for the bus driver to pull over. We’re all like, “nice, break out the wallets”. But after the driver walked down to the cop and showed him his license etc….we took off again. I was pretty relieved as Sinaloa has a long and earned reputation for being a drug trafficking center.

The hosts drive you as far as they can on the paved highway, where you literally exit the toll road on what is definitely the sketchiest off ramp you’ll ever see, as a matter of fact, 99% of people from the states would NEVER even exit there. From there you are greeted with a 12 passenger van and a truck with a trailer to take you into the village which houses the surf camp. 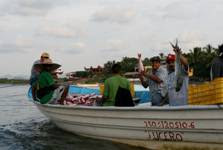 Dirt roads pretty much ruin suspensions in the cars down there, so this 40 minute ride to the house requires an empty bladder and a kidney belt. It’s actually not that bad, but it is not that good either. Ahead is the small shrimp village with a population of roughly 300 people, although the census report is up for debate.

Quiet, humble and right on the water, this little town has a couple stores to hit for soda, cookies and snacks as well as one little restaurant and a dude that sells beer. It is actually owned by one of our boat driver’s father. Although I never ate there, I would bet on it being good, as is evident in the girth of the owner shown here on the right.

Here are a few more photos of some of our crew. Check out Kevin on as he sets up to bash the lip. This was the first day of the trip and it was anywhere from 8’-10’ all morning long. This left wraps, and literally goes for 400 yards. You shred Kevin!

Point of View……Looks like were all clustered up, but we’re not, but it is kind of a cool photo of Brad and I watching one of the Arizona boys just “chillax” on this left. Sweet ride “Turtle”.

Another one of the many thousands of waves Brad caught this week, once again with the assistance of Paddle Surf Hawaii. Photos never due justice to how good it really is. But I can tell you first hand, this wave continues for a ¼ mile, which Brad ripped all the way across the bay. We would leave the house on a 30 minute boat ride at 5:30 am every day after a solid breakfast of Zucaritas, toast, Gatorade and coffee. The reason; See below.

Check out this early morning session….one of many of the killer waves that rolled in during the week we were there. Just looking at it makes me want to get wet! The am boat ride each morning was a gift from God, as you head out across the water, wondering what the day and swell had in store for you. The last day, we actually rode solid 5’ waves for 4 hours and saw a rainbow, complete with a beginning an and end point for at least 15 minutes….if it was not Hawaii, it had to have been Mexico. 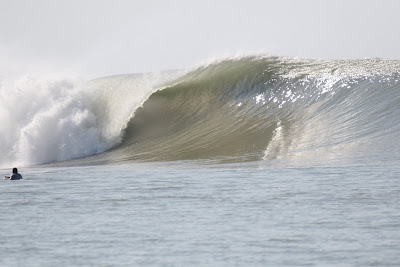 Scott, well, let’s just leave it this way; Death wish for the tube! You know what I mean Scott. How was the walk out to the point after that one? 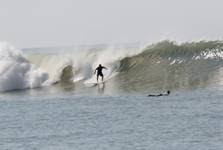 Brad killing it again…..stand up style! Yea Brah! Look at the set behind him. Now you get the feeling for what it was like….they just keep coming, and coming.

As far as travel for Stand up is concerned we all know that Mexico has a boat load of potential. The cool part was the paddle back out. It took at least 30 minutes if you connected all the way across. I saw Brad ride one; connect into a second wave, and eventually into a third. Needless to say he was A.W.O.L. for nearly an hour as he paddled back to the point. Below, using the paddle to get by the section; just another fun left for the author (me) at *##@##*’s!!

Finally, I leave you with is this; Bring lots of leashes. I mean maybe 3 as a minimum. We broke 7 and stretched a few to their max! On the last day, Brad was actually wearing two, just to make sure he would avoid the long swim to retrieve your board…which he unfortunately had to endure more than once. But that’s the price you pay when you’re charging hard, 5 hours a day, every day for a week.

Bieneviedos and adios.
Posted by John Ashley at 8:15 PM