Saturday was a bonus day. Friday was small, fogged in and really inconsistent. I stood out there on Friday at 7:30am for a half an hour before anything ride-able rolled through. There was no indication that it'd get any better the next day- so instead of popping up at dawn I rolled down at around 7:00am. (All photos courtesy of K.Kava.) 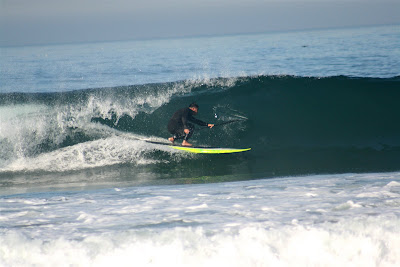 My eyes must've bugged out of my head. There were clean, head high, glassy waves rolling in with only a few guys out. I'm sure the Halloween hang over was in effect because the crowds were unusually light. I did meet three other stand up paddlers from up the beach (what's up Scott!) and they were as stoked as we were. 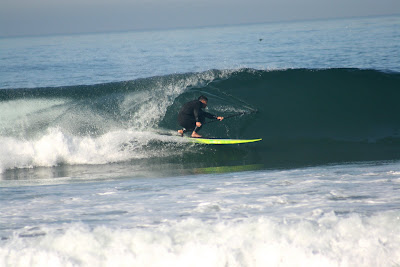 There were definitely two swells in the water that day. The waves with too much west in them lined up and closed out across the sand bar. The ones you wanted were the remnants of the Southern Hemi that was slowly backing down. Those were the ones with enough angle on them to race along the inshore sand wedge and funnel down into the hole at the end of the street. Most were chest high, speed-walls that demanded a pump-til'-you-die speed demon attack. A few came in with some grunt and threw little barrels- of course those were the ones we were trying to stuff ourselves into. But those waves were fast- and if you mistimed it at all you were left behind, watching it all spin away from you. 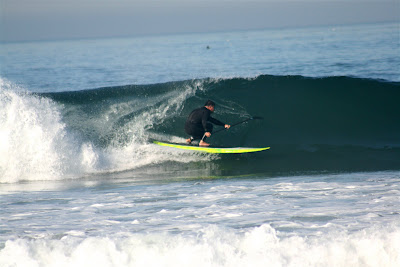 I'm not much of a barrel rider. Missing the hole is kind of a by-line that falls right under my name most of the time. Subconsciously I keep thinking about Cheateaux and how he knocked his tooth out pulling in; guy didn't even know what hit him. I like my teeth. And that's a lot of junk to have swirling around you in the tube. Still, getting barreled is really the ultimate. Hemingway would've dug it. Grace under pressure- just like fighting bulls. Papa would've pulled in. 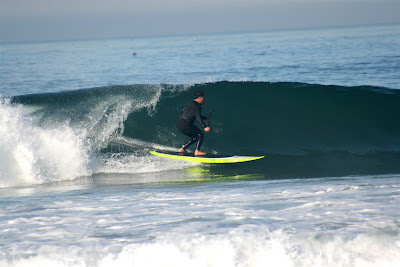 There were two spots to sit that day. Chad was down the beach a bit working the pier wedge. It's a better, more dependable wave but there were a few crawlers in the water and, in the case of a stand up surfer, one is a crowd in a tight spot like that. You've got to play it cool in those situations or the pack will turn on you and you'll find somebody in front of you on every wave. Here's what you cannot do: You cannot snag a set wave and then paddle right back out to the inside spot hoping to get another one. You should surf your wave and then make a point of not asserting yourself on the top of the peak- do that and you're asking for trouble. Play it cool- try not to be the guy on every good wave. 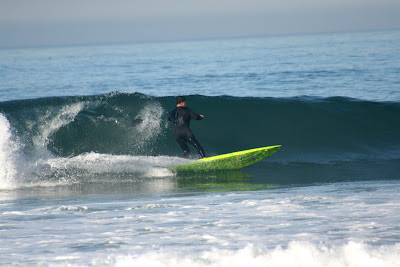 Me, I've got more insidious methods. I like to lure 'em into the good wave that comes before the perfect one. Bad behavior? Possibly. But hey we've all got a little Heart of Darkness in us somewhere don't we? And at some point it's going to be laid bare to you and the world. So I sucker others into good waves hoping I'll be in the clear for what's next. Is that so bad? And I tend to snake body boarders. Am I evil? 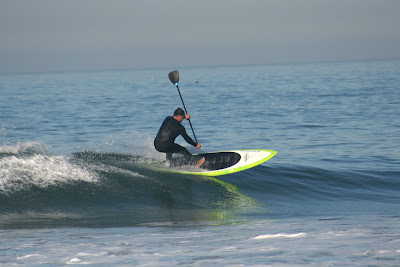 It was an interesting day. Like I said it was definitely a bonus day. The weather guys said it'd be windy all day long and here it was sheet glass. Well, not exactly- around 8:30am a little north wind started to mess things up and I was thinking that my little session was coming to an end. Luckily, I decided to hang out a bit longer. The wind backed down, the tide came up and for about forty-five minutes things got kind of weirdly perfect out there. 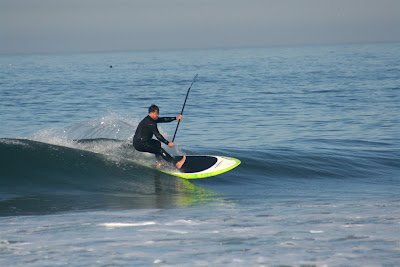 There were barrels up and down the beach. I snagged a good one (check the photo from two days ago- that's just one in a sequence of a little screamer I snagged) and as I was on the inside waiting to paddle back out, I watched a guy on a long board get the barrel of the morning. Full stall, check-turn under the lip and tube time all the way across the sand bar. Twenty yards of barrel riding- with me screaming my head off the whole way. I was more stoked about that guy's barrel than I was about my own wave. I still am- that guy killed it! 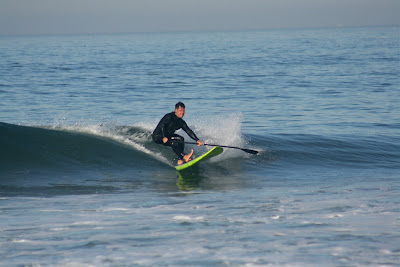 The next day I was down there bright and early. Predictably it wasn't the same. "Never two days in a row", the guy with the short board told me, "You should know that by now". And he's right. But there's more swell on the way and I've heard rumors that the first legit day down at our mysto-peak went down while I was hauling ass up to Los Angeles. I missed it and I missed the killer session that was unfolding at the Dog Patch as I sped by on the 5 heading north. But I didn't miss Saturday morning and that's one heck of a consolation prize. 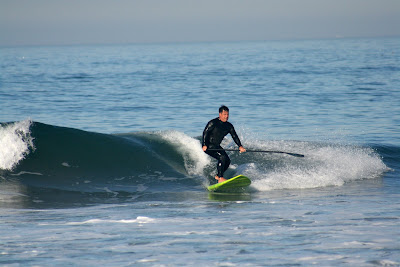 Stand up paddle surf lessons in San Diego and all that. Give us a call: 619.213.6622 or john@paddlesurf.net Click here for more info. Smiles, happiness and fun at no extra price!
Posted by John Ashley at 5:27 PM