Reader Mike Garmon recently returned from a deep south, mainland Mexico paddle surf mission. The guys were the first to stand up paddle this particular left hand point break- as you can see they scored. Here's the first part of Mike's report:

Get Up, Stand Up; Mexico Style
by Mike Garmon

In March of 2007, I was invited by my friend Brad to join a group of surfers who were putting together an October trip to mainland Mexico. I immediately said yes; not knowing, or caring, how much it was going to cost or where exactly we were headed. All I was dreaming about was the opportunity to ride roping left hand points on my stand up board.

Although I’d spent the last thirty years surfing the beaches of Newport and Huntington, I’d only been stand up paddling for about a year. But I'm hopelessly hooked on this surfing variant. Honestly, I’ve been swallowed whole by the paddle surfing monster! So when Brad offered me a spot on the trip, I jumped at it. I was excited to put my skills to the test in some solid, mainland Mexico surf. 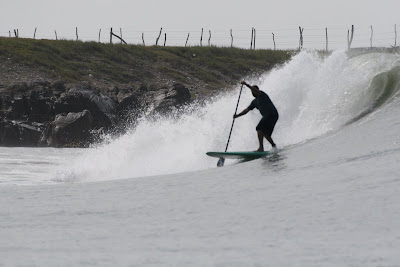 As it turns out, of the sixteen original trip members only ten were still signed on when October rolled around. Six guys had to drop out- victims of our nation's recent economic calamity. I really only knew Brad. The other guys were his crew, friends of his from Rock Harbor Church in Costa Mesa. 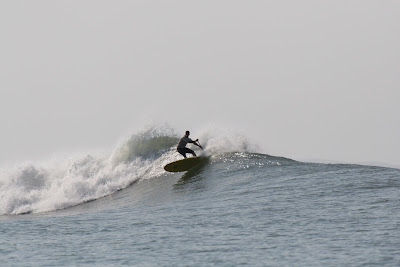 After talking a little more to Brad, I learned a bit more about what we were getting ourselves into. My knowledge of our destination had been limited to casual conversation. My last Mexico trip was to Puerto Escondido several years ago. Puerto is a heavy place to surf and I was uneasy about going through that gnarly of an experience again.

Although we weren’t going to Puerto this time, I’m familiar enough with surfing mainland Mexico to know that there are many, lower key spots that can be just as nasty as the Mexican Pipeline. Although many stand up paddlers are charging big barreling surf with super progressive approaches (notably Hawaiians on the North Shore of Oahu), I wasn’t quite ready to put my life on the line for a couple of seconds of glory.

Still anxious about the trip, I began investigating on my own. I found an internet link for our destination. I spent hours analyzing the site, checking out things like where we’d sleep and the waves we’d soon be surfing. Seeing what we’d be dealing with definitely helped. But what really helped were the surf photos; the beach break looked good- but the point, well, the point looked absolutely perfect. My feelings evolved from anxiety to anticipation and as October grew closer that anticipation became unbridled excitement. I was going nuts!

Check back soon for Part II

Get off the sofa and come learn to stand up paddle surf with us in sunny San Diego. All the cool kids are doing it! Set up your private lesson today: 619.213.6622 or john@paddlesurf.net
Posted by John Ashley at 8:20 PM