The reef breaks to the north weren't the only game in town. In fact, my favorite wave of the day was right out front: 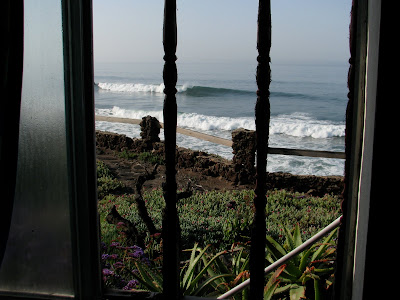 But before we could sample any of the goodies we had to get to the water. One thing about surfing in Northern Baja is you realize you've got to work for it; it ain't free. The beach launch was pretty serious. To get to the water, you walk barefoot across a series of volcanic rock ledges. It's the kind of sharp rock that you wouldn't dare set your board onto. If you did, you'd have a million little shatters in your fiberglass; it was that sharp. And don't even think about falling, that stuff would eat you right up. 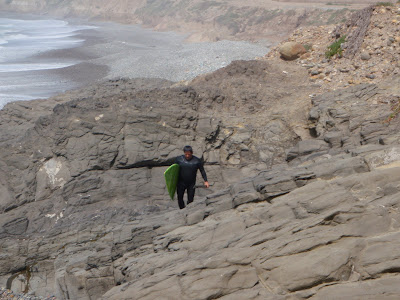 Once you've climbed down the cliffs, you find yourself on a steep cobblestone beach that's only a couple feet above the high tide water line. To make things even more interesting, there's a four foot surge-pound slamming onto the rocks and shooting them into your shins like little basaltic hockey pucks. 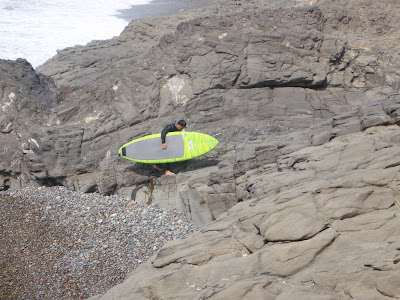 This is not the place for hesitation- once you've committed yourself to paddling out, you go! I watched Kelly launch off the beach directly in front of the Dog Rock and just barely sneak under a sucking up wall of water. If he would have been hit by the wave, his board would have been slammed backward into the rocks and broken in half. Seriously, that launch was mean! 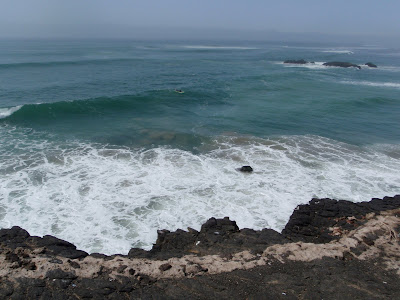 Check me out in this photo, I'm outside of the surge-pound getting ready to time the sets to paddle in. Look at the black volcanic rock in the foreground, cheese grater for sure! There was a little bit of size that day, check out the wave we were surfing way up in the background.
Posted by John Ashley at 10:24 PM

In an older post when you picked up your new board you mentioned you didn't know if you were to stoked on handles. It looks like from the photos of your recent Baja rock dance that the handle was a big help.
Is that a correct assumption? I ask because I'm in the market for a new board and wondering on the handle in the board myself.
Thank You,
Mike

Yep- I've reversed my opinion of the handle... I'd get it- just for the reason you mentioned... when you've got to grab your stuff and go jamming up the beach.

For the long carries, though, I just throw it on my shoulder old school style.


I thought I might stand on it while surfing- I've yet to do that. All in all, I'd get it again.

Lemme know what you end up getting.