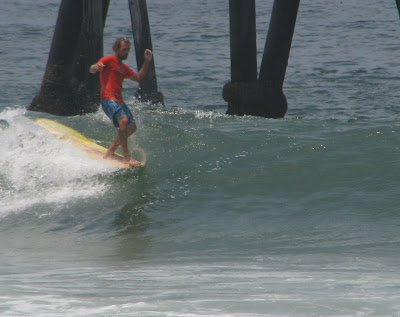 Things are changing this summer for stand up paddling- people are really getting into it. Many are taking stand up paddle lessons and those beginners naturally and understandably want to take it to the surf.

We do have to remember that we're not "just another surfer" in the water- we're on a high visibility, extremely large and potentially dangerous stand up board.

Photo: These guys aren't the enemy- but bad decisions that leave your SUP board pinballing through the lineup will make them that way!


Like it or not, in this crowded surf world, we've got to play by a different set of rules. Here's a post from www.ipaddlesurf.com with my reply- check it out, especially if you're just getting started in surf paddling.

"I have a friend who surfs North Garbage regularly. I stopped by after work today and watched from the cliff. There were only three surfers in the water (my friend a longtime surfer, a short boarder and a SUP.) A waves comes in and my friend is closest to the peak and gets the wave. The SUP is on the shoulder standing in position and goes over the falls crashing into my friend as she makes her bottom turn, causing both of them to fall off their boards. The SUP was not going to take the wave, but just kooked out. I heard negative comments from a guy at the top of the cliff. This sort of stuff gives SUP a bad name."

Wow- that sucks! I paddled the Cliffs quite a bit last summer and it can be really fun but in the last year- it's been more and more touchy with more "comments" being thrown around.

I know a few of the guys who SUP there regularly- I wonder who it was? What color was the board?

It kind of reinforces the idea that SUP paddlers should seek out and surf what I call the "non-spots" at the Cliffs- there are many mushy, semi-spots that prone surfers don't even want or aren't even surfing- those are the spots that you should be SUPing at the Cliffs.

It's absolutely wrong to paddle up into a pack of guys on one of the name spots at Cliffs- you're definitely going to get vibed. I just paddle well outside of everyone so that they can see I'm passing them by and head for empty spots down the beach.

Bummer that happened- when I first started paddling there, there were very few paddlers so everybody was interested in the SUB- I even let a New Break local give it a spin down there while I surfed Newbs on his (leashless) hand made Prodonovich longboard- I guess things have changed!

Looking for stand up paddle surf lessons in San Diego? Contact us at paddlesurfbaja@gmail.com or (619) 213-6622. We can also set up stand up paddle board rentals with drop off and delivery. Click here for more information.
Posted by John Ashley at 7:54 AM

wasn't me going over the falls. but you re right, the vibe changed from last year. The cliffs should be a place you r passing trough to get south. Still a bunch of spots to surf in between the packs of surfers.

prone surfers do not like sup ers at the cliffs.hey gordo the pot belly dude the stuffs his face with the donas and pretends to play the uke.ithink the gemimi is the best surfboard design ever.your still riding single fin longboard and barely getting to your feet.that was last sat.at cliffs.sun some other gray hair spouting off about some coast guard boating regulation i guess he was referring to me.how did feel when you burned me on the drop and i zoomed right past you.hey kook.john your right the main breaks should not be ridden by sup.they hate sup.because they cant.captneg9.ps i need a clamto

I don't see too much SUP'n where I surf but I do recall a cool surf session at Newport in Oz on my wedding day in 2003. Tom Carroll came paddling out on a SUP and started catching come awesome waves. It was a memorable surf for that reason ... oh and the fact that I was sh!t scared of getting married that day!!!

I agree- paddle through to spots where there's nobody surfing- now we just have to find a way to get others to understand.

Donut king is probably the Mayor on Basura Norte. What ever.

I'm assuming you live in Australia- probably near some perfect, reeling, right point break- you're killing me!

Would love to hear the details of T.Carrol just killing it on his stand up board- I can imagine the hooks he was probably throwing - even on that big stand up board.

And shit scared is about right for approaching a life of wedded bliss- at least it was for me too!

There were kooks in the water way before SUP and it's the same thing. If you don't know how to surf, stay away from the good surf spots. I don't know why everyone is making such a huge thing about SUP, the same thing would happen if you kooked out on a short board. The same thing still happens between surfers.

I was at Steamer Lane today and watched some bald-headed, walrus-looking surfer try to scream another guy out of the water because they were going to drop in on the same wave. Just another jerk in the water.

My take is this: if you know how to surf, surf wherever you want. If you don't know how to surf, find out where the beginners learn or search out those empty waves. But don't make it about SUP, it's about surfing and not being intimidated by some walrus.

One of the main attractions of SUP for me is that I am most often doing it alone or with just a couple friends, it is kind of like getting in a time machine.... here I am doing stand up at dogpatch with 2 other SUP people in the water and looking over to Old-Mans and seeing 60 people out.... I am always chuckling to myself about it. Dogpatch 1958 - Old-Mans 2008. I don't know how long this can last but I say let the crowds have their waves .... cuz we can have a blast on waves that I would never bother with on my traditional surfboard.On SUP-ers we can trade waves, laugh, and tell jokes.....and i can finally surf like i did when i was 12 years old.........me and a buddy having blast with no one around....

You are EXACTLY right!

Your point is perfectly made- thank you for writing that- let the crowds have their waves!

You're right Mike- those guys suck. Like Mitchell says though- let the crowds have their waves.

Even if you can surf well- there will always be tension. Even at my home spot, where I know everyone in the water- if I don't play it really cool there will be problems.

It's a thin line at the "main event" peaks between what's acceptable and what causes problems. And it is totally unfair but if you're not one of the accepted faces in the lineup you can expect to be talked to by some idiot.

And I hate listening to idiots talk.

There's the way it should be and the way it is... most of the time they don't converge. Much easier to just paddle away.

Hi, As a regular at the Cliffs I'd like to say it isn't all SUP's that cause the bad vibes. But there does seem to be an increasing number of guys coming out who can barely stand on their boards, and they are the ones paddling right into the pack. They also seem to be the same ones that try to catch every bump that rolls through, whether or not they just caught (and maybe made) one.

Long boards, short boards, and everything in between coexist as long as everyone shows respect, but as soon as the respect is disregarded the vibes turn sour, no matter what you ride...

And I'll give you this.... unless you stuck a fin on your long board back when Tom Blake did it you are kook, KOOOOOOK.

Idiots with no brains and fins on their boards are kooooks.... bwaaaah I hate everybody...... bwaaah I hate myself.

Glad I worked that one out.

SUP are not surfers so stop with the prone vs non prone thing. They are old guys standing on corked canoes who absolutely are wrecking surfing.

Surf breaks were already packed but now you have to worry about 50 pound boats hitting you in the head all day long. I wish I could take a powerboat and sit 20 yards outside of where SUP'ers take off and gun it aiming at them every time a wave comes. Then they could live my surfing experience lately on a real surfboard.