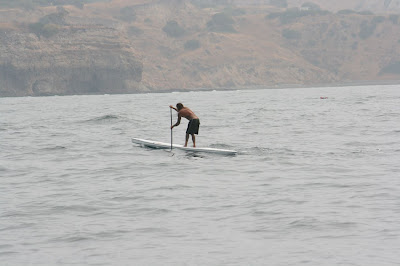 The Rock to Rock Race is an annual paddleboard race that starts at the Isthmus on Catalina Island and ends 22 miles away at Palos Verdes. For a lot of paddlers it’s been their first channel crossing and a stepping stone to the legendary Catalina Classic.

The R2R has been around since the late ‘90’s and took a brief sabbatical in 2005/2006, although a few die-hards held an underground R2R to keep the memory alive. In 2007 the official race came back with a new finish at Abalone Cove and added relay divisions including standup paddle. That year Ernie Johnson and I found a last-minute escort boat and partnered up to paddle Bill Stewart’s golden slipper. We had a beautiful glassy crossing with deep-blue water and the occasional pod of dolphins giving us inspiration. I was pretty surprised that no other standup paddlers competed as there were several in that year’s 40-mile Avalon to Dana Point Catalina Challenge. Maybe it’s because the race is held on Father’s Day, but for many of us that’s the perfect way to start the day if you’re going to finish it with a steak, martini and cigar.

On the Friday before the race EJ & his wife Andie sailed their boat over to Two Harbors while my wife Shirley and I came over the next day on the Catalina Express. On the way out of San Pedro a strong NW ground swell was pushing through the channel and there were whitecaps everywhere. I knew then and there this wasn’t going to be like our ’07 crossing. In contrast, the afternoon in Two Harbors was a tranquil oasis in the lee of the wind and swell as we took turns putzing around on the ULIboard tenders and dingy and saying hi to old friends and paddlers. Looking out past Ship Rock the seas were still looking pretty messy and back on the boat while having a beer and some chips I had some serious thoughts about going back to Dana by sail rather than PV by SUP. Later we joined the other paddlers and boat crews on the beach in front of the Harbor Reef Saloon for the pre-race meal and meeting while praying for an evening glass-off that never happened.

Morning came pretty quick and we got to the beach for the 5:30 check-in as the traditional pre-race bonfire blazed nearby. Our board this year was an 18’ something by barely 25” missile from Ohana paddleboards. EJ and I didn’t too much pre-race water time on the board but at least we had a few hours across the channel to get used to it. This year I got to do the start leg and would let EJ finish the race. That’s always my favorite part; 60 or so paddlers flying through the moorings and getting a look at where you stand in the pack as you pass the last row of sailboats, then off to Ship Rock to hopefully find your escort boat. We traded off paddling every 25 to 30 minutes and on a couple of those legs mid-way I would catch a cross chop or phantom wake and wound up going in the water a few times. When I was upright the board had a beautiful glide and would take off on anything resembling a swell.

Overall it was a pretty bumpy crossing, but thankfully the wind backed down a couple hours into the paddle. The girls really did a great job keeping us on course and the paddlers hydrated as the boat was getting pitched around more than we were on the board. We did our exchanges off a dingy trailed behind the boat and it was pretty uneventful till the last changeover when I slipped climbing up the transom and pinched a finger on a rail and somehow got a nice bruise on my hip (it’s actually in the shape of Catalina Island).

When it was all over LA Co. lifeguard Kyle Daniels won the race for the second year in a row in a time of 3:42:42, with Brian Szymanski of NCP winning the stock paddleboard and Jane Cairns first Wahine. We finished in a little over 4:21:47 beating our time last year by about 15 minutes. Like 2007, we were the only standup team competing. Long Beach lifeguard Jared Vargas was the only other SUP competitor and did a great job doing the first solo SUP R2R in 4:45:16 on a very stealth looking double carbon Bark 16 with Crockett and Tubb’s old boat as an escort.

It’s always a great experience being in the water with our fellow paddlers, but this one is very special as there are always a few kids paddling with their dads. Joe Bark did the relay with his kids and some friends, and Tony Hotchkiss teamed up with his 83-year-old dad Frank. Judging by these teams and the number of kids at the finish I’d say the R2R has become a great Father’s Day tradition. I hope my kids join me for a paddle one of these years, but in the meantime paddling a relay with a fast guy like EJ was a nice way to go as we had a pretty quick crossing and I wasn’t too tired to have that steak & martini when I finally got home.

HEADS UP: The paddleboard community has been very gracious and accommodating in letting standup into their events. There are some very cool races throughout the year and I don’t think you’ll find a nicer group of people anywhere. Check out the events page at www.eatonsurf.com and www.paddleboard.com for local race updates. Eventually I expect we’ll see some SUP-only events and some races have tried a staggered start or separate course for SUPs in the mixed events. In the meantime be sure to respect your fellow paddlers by giving them some space whenever possible. SUP is a different craft altogether from the traditional paddleboard and I know first-hand it’s not a great feeling when you’re in a pack and having a carbon fiber blade swinging away inches from your head.

Check back tomorrow for some new Rock-to-Rock photos!
Posted by John Ashley at 7:56 PM