Camalu Dreaming: "How about that pool?"

Baja travel isn't always about cold margaritas served poolside with chips and guacamole. There's still a little bit of an outlaw nature to the place. Drive in a couple hundred miles and turn off on any westward running dirt road and you're bound to find something a little out of the ordinary- or just downright weird depending on what your frame of reference is. The point is this: if you're not about following the camp host's rules, if you don't like "quiet hours", if you want to detonate watermelons with quarter sticks of dynamite (oh yeah, read on), if you want, in short, to get into the shit, head south.

Eric Hoffman paddles stand up boards when it's glassy and wave sails when it's blowing. Here's his report of a little run he did into Northern Baja. I'm going to name the spot because I'll tell you right now it's never going to get crowded. Ever. Even though there's a perfect little stand up wave that will hold any size swell with a funky Bate's Motel right in front of the break, you're just not going to get Astrovans full of NSSA brats pulling up for a go. Nope... this place, you gotta want this place. 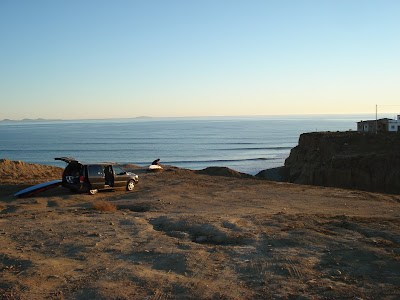 Tempting? There's surf right out front and it can and does go off- usually unridden.

P.net: Why did you guys decide to head down to Northern Baja? How far down did you go?

E.Hoff: We've been down there quite a few times in the past. My buddies, Chris and Pete, live in the Bay Area, so it's easy for them to jump on a flight. I pick 'em up at the airport here in San Diego and we can be surfing that afternoon. We went to Punta Camalu, which is about 2-1/2 hours south of Ensenada or 1/2 an hour north of San Quintin. Sometimes we surf Raul's on the way down, then stay in Ensenada the first night. 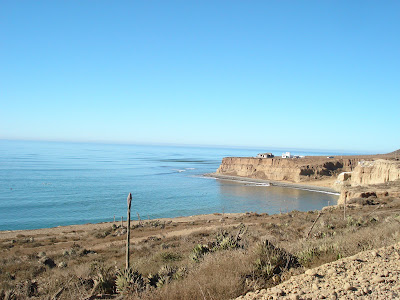 Small, but fun and glassy. Pull out the stand up and knock yourself out; the crowd looks about right.

E.Hoff: Like I said, we've done this one in the past. Camalu's good because you have the choice of an inside point, outside reefs or drive 15 minutes or so to Shipwrecks. What's amazing to me is that none of them ever seem crowded - if there are 3 other guys in the water, it's a busy day. None of the breaks are difficult - easy paddle outs, relatively mushy waves. Easy longboard waves, but they'd probably be boring on shortboards. 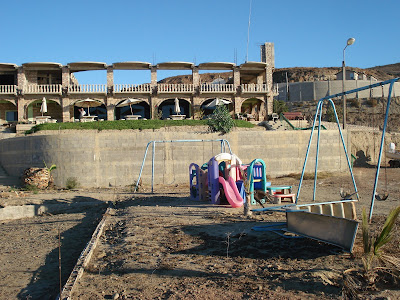 P.net: What kind of gear did you bring down- types of boards, windsurf equipment etc.

E.Hoff: My buddies were on eggs & I was riding a 10" Oxbow standup. I also had a 9' Blair standup / windsurfer with me, but there wasn't enough wind to bother with it. I attempted sailing Camalu on a shortboard windsurfer a couple of years ago without success. I think the wind shadow from the cliffs was just too much. I've heard of people sailing Shipwrecks, but I've never seen it. There's usually decent wind there, but not this time around. 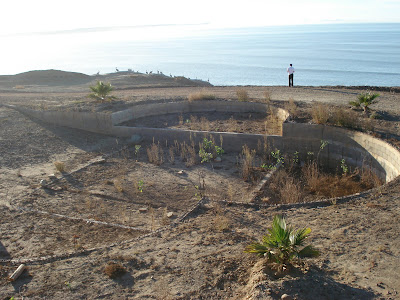 How about that pool?

P.net: What's the break like? Had you ever surfed it really good before? What's the potential for good surf there? How did you guys get it? Any memorable sessions?

E.Hoff: The breaks are mellow. Inside at Camalu can get a little rocky and you'll need booties at both spots. Primarily rights, but I've seen it going left on the beach just north of the Shipwreck. I've never been there when it was epic, but I've definitely been there for some really good days, which are even better because no one else is around. The most memorable session I've been there for I ended up watching from the beach, burnt out from my long swim / walk with windsurfing gear, as my buddies got some shockingly long rides. This trip, there was barely any swell, but we had a great, long session at Shipwrecks on Saturday - chest high & super clean, with just the three of us in the water. 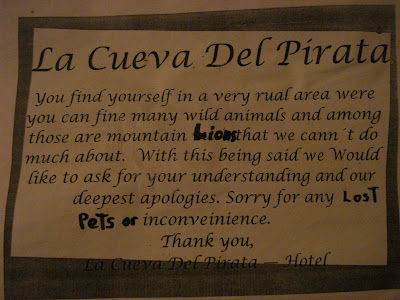 And how about those... mountain lions!

P.net: Where did you stay? Would you recommend it? How expensive was it? Is it the kind of place you'd bring a girlfriend or wife?

E.Hoff: We stayed at a little half-built hotel at Camalu called La Cueva del Pirata. It's fine and has hot water. I think it was $40 or $50 for a room with four bunk beds. They also have a restaurant, which is pretty much American prices. There are a bunch more restaurants in town, most of which are pretty cheap. There's also camping at Shipwrecks, which is fenced in and guarded. We figured $15 per person per night is an acceptable premium to pay for not having to pitch a tent plus you get a hot shower! I'd only bring a girlfriend or wife down if she was a "camping" kind of gal or if I was trying to scare her off! Everything down there is coated in dirt & not all of the dirt comes out when you get home...

Check back for Part II of Camalu Dreaming!

Stand up paddle surf lessons in beautiful, sunny San Diego. Don't hesitate- do it now! Need more info? Click here for lesson details and testimonials from satisfied customers. We're friendly, we're happy and gosh darn it, we want to see you on the water? Capiche? Email: john@paddlesurf.net or call 619.213.6622
Posted by John Ashley at 6:40 PM

dont ya know we are in a drought.theres a saying in mex.no hay no se tal vez no se.welcome to mex a an venture around every corner.ilove it. and where is that camping girl.lost i guess.captneg9.keep up thegood web site jonnyboy.

Found some 20 yr. old camping pictures of this place the other day. We were just teenagers w/shortboards when we stumbled upon this pointbreak back. The set up looked so perfect, until you paddle out and realize how mushy it is.
SWEN

I lived in Camalu all my childhood, it's really really funny to read the impressions of other people.

I know, it's a really old post, but I was looking for a good place to surf near Ensenada, and I founded my hometown!
Be careful with the mountain lions! Haha (I never heard about that haha)