P.net: Anything funny or interesting about the places that you stayed or where you surfed? Anything spooky, creepy or weird? 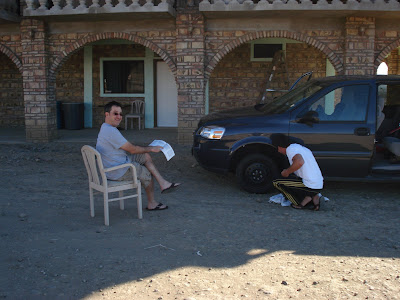 Photo: Some of us where born to lead, some to follow...

E.Hoff: No one at the hotel speaks English, even though they cater to Americans. This year, one of the new guys at the hotel spoke perfect English - he had just moved down there from Sacramento, which we assumed meant that he was in trouble for something back home. 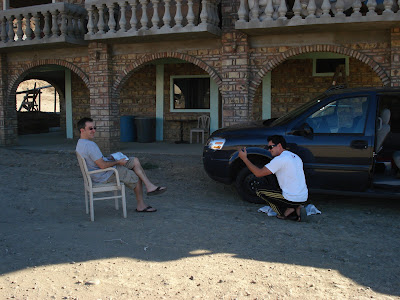 E.Hoff: We've never had a problem, but I think that being semi-paranoid is a good idea. I'd much rather pay $5 to camp in a fenced, guarded spot than be one of those stories you read about in the U-T (that's Union Tribune newspaper for those not from San Diego- ed.). I think that most of the driving risk is in the Tijuana to Rosarito stretch, but there was a rumor floating around that the cops aren't allowed to pull anyone over on that little strip of road along the border any more. I flat out refuse to drive at night - it's probably fine, but why risk it? 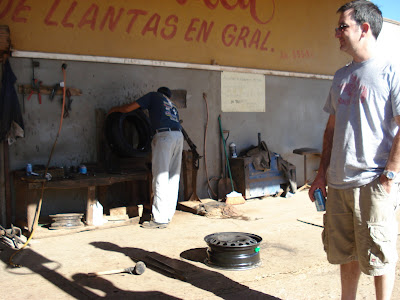 Photo: A trip to the tire store, Baja-style.

P.net: Was the trip good enough to do it again?

P.net: How was driving down there- any auto malfunctions? Any sketchy road stories?

E.Hoff: We never had a problem before when we took my Jeep down there, even on some pretty bad roads. This year we popped a tire on our rental minivan on the dirt road into Camalu, which is a pretty easy track. Llanteras are fast and cheap for fixing flats - they charged us $3 and we were back on the road in 20 minutes. Chris was having a hard time figuring out how to put the spare on, so I think that he knows how lucky he was to have me there to read him the owner's manual! Even though Camalu's a bit further south than some of the more popular spots, most of it's paved, so I don't think it takes much longer to get there. 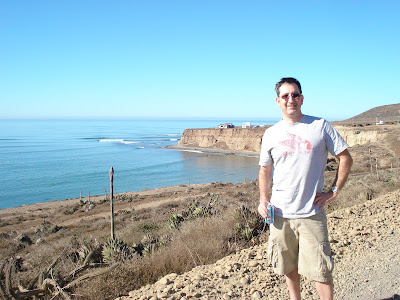 Photo: And the only question here is... is that a diet Pepsi you're drinking- would you like a slice of quiche with that?

P.net: How was the food? Any recommendations?

E.Hoff: There's a place called Manzanillo in Ensenada that's fantastic. We had some yellowtail sashimi there a couple of trips ago that's still memorable. We had a cab driver this time who pretended not to speak English and he took us to some other place - probably his cousin's or something like that. There are lots of LOUD bars downtown - just watching the locals cruising the strip on a Saturday night is fun. Also, for the pyros in your group, there are tons of fireworks shops - we did an experiment a few years back with a watermelon and an M-1000 that had all of us laughing so hard we could barely see!

P.net: Did you eat the worm?

E.Hoff: Probably, but not intentionally. I hope the alcohol disinfected it!

Thanks a lot to Eric Hoffman for sending in this report- I was stoked to check out the pictures and read all about how it went down. Can't wait for a long weekend and a big north west swell to get down to Camalu, post up at La Cueva del Pirata and bag me a cougar... er, mountain lion.

Stand up paddle surf lessons in San Diego. Why risk your time paddling with some shop rat who just stood on a board a week ago? Come learn from a professional educator with over fourteen years of teaching experience- pedagogy, yup we got that. Give us a call: 619.213.6622 or email john@paddlesurf.net If you'd like more information click here and be sure to read the testimonials from some of our satisfied paddle surfing clients.
Posted by John Ashley at 6:53 PM

manzanillo is run by my friend javi type a guy that pushing on his inhaler every minute.nice guy hard to get a table on a sat nite.tell him stevo sent ya.guaranty to get a seat.no talk about hussongs the oldest bar in baja.captneg9.p.s.house for rent at san miguel.ensenada.