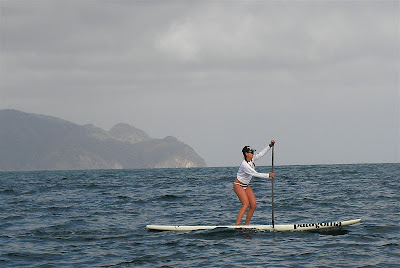 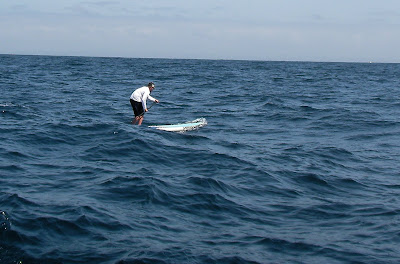 Here's a couple more photos of the Avalon to Dana Point Race. I'm piecing together the whole story- I'll post once I've got a little more information.

Top and Bottom: Imperial Beach paddlers. For being first timers on the big course- the thirty eight mile gap didn't seem to phase them much. I.B. local surfer/firefighter Tyra sticking one of the first legs of the race- she was the only woman to compete in the stand up paddle division. Eight hours hours later she'd be pulling the team into Dana Point- the team's total time on the water was close to 8 hours and 50 minutes- brutal.

In the lee of the island the conditions weren't too bad- but I've been told that it got really nasty once you left the island's shadow. A combo swell from the NW and SW brought with it washing machine conditions. I believe the technical term is mixed seas. Nasty stuff. Everybody got tooled.
Posted by John Ashley at 9:10 PM

how many team members.very impressive look at the chick like a stroll in the park on a summer sunday afternoon.open ocean things would fill my mind so fast that i would not get off the support boat.creepy things under your board.now you why the gal has blinders and looking straight.just impressive great job team I.B.captneg9.

In your line of work you've got to deal with the highly elusive but extremely dangerous brown trout- talk about creepy!

yes it does but brown trout dont bite just a bit smelly and the funny thing is they are corn eaters there by product is methane look i just discovered a new fuel source.capt neg9. todays paper has a nice story on the female fire stopper.I.B's first.