Here at www.paddlesurf.net we're not quite big time enough to get expensive digital cameras sent to us for review. So I'm going to have to be a little restrained in my testing of this camera because, after all, I shelled out my own bucks for it. Which kind of sucks because I would've liked to film myself dropping the Oly a couple of times onto a concrete floor- it'd be fun if it wasn't my camera. Here are some first thoughts:

The Olympus 1030sw just feels good. First of all, the thing is pretty darn heavy. It kind of feels like a little metal brick. That's not a bad thing- it feels solid. Strong. Supposedly I could sit on the thing and not smash it- that's good because I could see myself doing that sometime.

Actually, it'd probably get smashed by my big, white, marine-grade (that just means it's white and more expensive), Igloo cooler. Or I'd forget it in the bottom of my daypack and jam a sandy, wet, wetsuit on top of it and then put the cooler on it. I think you get it, I abuse stuff. The camera feels like it could take it.

I'm a fan of the amount of metal used in its construction. How many times have you reached for some gadget and been kind of let down by how "plasticy" it felt? There's a lot of good, old fashioned, metal in this camera. In fact the only parts that were obviously plastic were the waterproof doors covering the battery and cable compartments and the big screen on the back of the camera. Speaking of the screen, it seems to me that if something's going to get messed up in the rough conditions this camera will be subjected to, it's the screen. It'll probably be a good idea to buy some kind of protective cover for the screen. 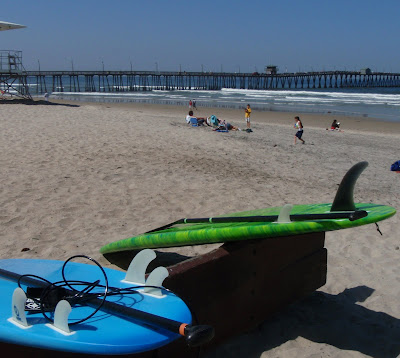 As far as photos go, I like it better than the X-acti. There's all kinds of controls and options that you can monkey around with. To be honest, I haven't done too much of my homework as far as what I need to do to take really bitchin' pictures (check out this guy's blog- he uses an earlier version of the 1030sw and get's unbelievable images). I've been messing with the "Scenes" settings for taking photos indoors and for sunsets and photos around the fire- it's been fun and for my purposes seems to work well. Favorite photography feature so far? The rapid fire mode- you can set the camera to fire off bursts of photos for as long as you hold the shutter button down- can't wait to use it to capture some lip schwackin' action.

All photos in the last two posts were taken with the Oly- check 'em out and let me know what you think about them. I'm still learning about this camera but so far- I like it. It feels really tough and the pictures have come out fine for me so far.
Posted by John Ashley at 10:41 PM

thanks for the review, john. seems like it's the one to get. the only thing that bugs me is the non-standard card you have to buy to use with it. have you tried shooting a vid w/ it yet?

I have had the Olympus 720SW shock+waterproof camera for over a year and believe me it is tough. I have dropped it tons of times and have had it in my pocket on many surf sessions. I think my kids have even used it as a weapon during their many brawls. It's a tough little camera.

I've been using the Oly 790 since late last year. I've taken hundreds of pics with the camera in the water and have had no problems so far. The only inconveniences are when the battery decides to give me the "red battery" low warning symbol, and a "clean the memory card" warning message which popped up yesterday just as I was about to fire off a rapid shot series of a guy on a nice wave. As long as the "clean card" message was showing the camera wouldn't let me take any pics.

I got home, popped the card out, wiped the metal contacts off with the inside of my shirt (much cleaner than the outside of course) and was back in business again. Re the low battery warning, the camera has never shut down on me or caused me to miss any pics because of a low battery. When I get home I just put the battery in the charger and a couple hours later it's charged. The charge lasts quite a while so it's no problem.

If you're into free photo editing programs, Picassa by Google is a good one. It's got the easiest cropping feature I've ever seen and you can straighten the horizon line and crop what ever you want in just a few clicks. The color balancing stuff is elementary but effective.

I got a little padded case for mine and the camera either lives in the case, or is hanging around my neck tucked away nice and safe unless shooting pics. I also rinse the camera off after every saltwater session including opening and closing the lens cover to wash that part out. Also I make sure all the camera doors are snapped shut and tight to keep the water out. Most these tips I got from Jason who does take some amazing pics with his 770.

Thanks for all the feedback guys. I agree the thing does feel solid- hopefully not solid enough to wound any of the Brewer children however.

Gary- thanks for the tips. I did go check out the Daily Bread blog for info... it's just going to take more time on camera for me to get this thing figured out. It does seem to work pretty well in dumb guy (aka automatic) mode though.

As for video- it seems to take pretty good clips - not as nice as the x-Acti but they may be perfectly fine- I'll post more on it and maybe even throw up a clip once I've had a chance to mess with it.

Oh yeah- the non-SD card was a bummer... because I had a bunch from the xActi but I did manage to get the guys at CCity to toss the 2gB one in for free. I was at Radioshack tonight and saw that it costs close to $70 new!!! Yeee Haw!

1030SW has card reading error using an Olympus Card. The error even shows a small version of the photo!! but it can not be accessed by the camera or computer. Olympus says to BUY 3rd party recovery software!!! but won't replace the card!!! Whole websites deal with this issue!

My Oly died within a month of using it. The state lifeguard's bought two and they both died within a summer's usage. I'm not recommending this camera to anybody. It sucks- photo quality is poor and it's not the "tank" that I thought it'd be. My 149 Go Pro takes better pics!