Anybody who says, "It's all been done" or even worse, "Been there, done that" obviously hasn't looked at a map with a stand up paddle in hand and a sense of exploration. There's tons of adventure out there and it just takes an open mind and a ready spirit to go do something remarkable.

Last week, we got a chance to chat with Rich Hidalgo of the Imperial Beach Life Guards about his recent circumnavigation of Lake Tahoe. As far as I know, this band of masochists are the first to circumnavigate the lake. Approximately seventy miles of paddling and a whole lot of blisters later Rich and friends completed their trip- here's the story: 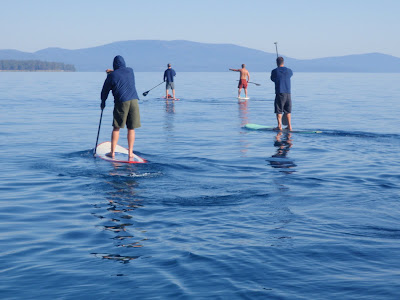 Paddlesurf.net: So, who paddled the lake with you?

P.net: Where did the idea to circumnavigate Lake Tahoe come from?

R.H.: Joel and Chris originally came up with the idea of visiting the Tahoe area in the fall season. The idea morphed into a SUP circumnavigation of the lake. Originally there were going to be prone paddle boards, mountain bikes, and we even flirted with the idea of a catamaran. Stand up paddling was the final option and we rolled with it. 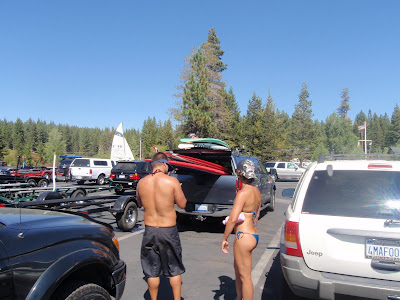 P.net: So Rich and Joel planted the seed, how did you and Tyra come into the picture?

R.H.: Tyra and I caught wind of it and just started amping to do the thing. Chris was held at gunpoint to purchase some Lake Tahoe ‘Water Maps’ and we planned the trip soon thereafter. Chris was able to find these ‘Water Maps’ of the lake (highlighted areas of camping, fishing, docks, expected air and water temps, windage, etc.) from a kayak store in the Tahoe area that sold them online. We reviewed the map, plotted a course, made some camping reservations, and set a departure date. Kind of organized, kind of loose. 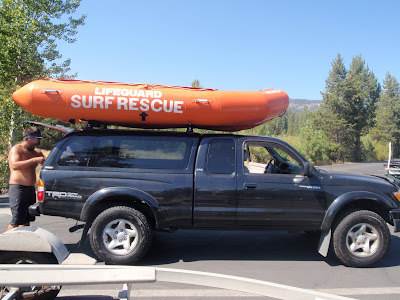 P.net: So what's the experience level in a group of paddlers like yourselves? I know you're all life guards (except Tyra who is an Imperial Beach fire fighter) but what's the sum of your experience? 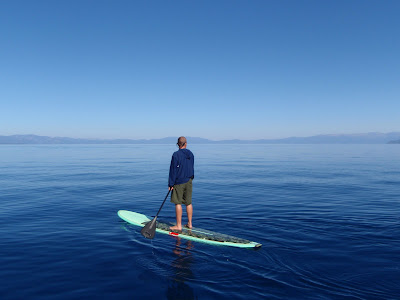 R.H.: Everyone involved has a ‘water background’ – Chris is our resident corporate donkey; works for ‘the man’ 5 days a week and Lifeguards throughout the year in Imperial Beach. Joel is currently Lifeguarding in New Zealand and will return in a few months for the summer season in Imperial Beach. Justin is attending the full-time Lifeguarding academy at Asilomar, Monterey, CA for the CA State Parks system and is a long-time Lifeguard for Silver Strand State Beach. Tyra and I both work and live here in Imperial Beach. Everyone involved lives, works, and recreates in the ocean and the paddle seemed to be something different and challenging for us all to do.


Check back for Part II of the Tahoe Circumnavigation!

Stand Up Paddle Surf Lessons in San Diego: Give us a call! 619.213.6622 or email john@paddlesurf.net Click here for more lesson information.
Posted by John Ashley at 9:45 PM