Got a really nice email from reader Bill asking about my choice of camera equipment. Well, I got really into describing the pros and cons of my camera and realized that this might make an interesting post for those of you who are interested in this kind of stuff (translation: Gear Geek).

Disclaimer: I'm not a "camera" guy, I've just used this one for a couple years now and I like it... if I'm way off base with something here, don't let me embarrass myself, let me know! Here is an edited version of our email correspondence:

The camera that I use is a Canon Powershot S5 IS - I REALLY like this camera. For what I use it for, it's close to perfect. Let me give you some of the strong points:

1. Cheap. The camera runs about 350 bucks. I didn't want to spend so much money on the thing that I'd be worried about it on the beach- and I was partially broke at the time so it was a perfect fit. In all, it's a great deal for a device that not only shoots really nice photos but also does an excellent job with video. Speaking of that...

2. Video: I use this thing to shoot all the footage for the little clips that I've posted... what sets it apart from other superzoom cameras is the fact that you can zoom while videotaping (at least that feature set it apart three years ago, I'm sure others can now zoom while taping too) and that this camera has two small mics - it records sound really well. One other thing, there's a dedicated video button on the camera body making it easy to quickly start taping- it's a small thing but it makes a big difference.

3. Zoom capabilities with Canon Image Stabilization technology: This camera can really suck you right up into the action- it's got 12x zoom and when I added an aftermarket extension tube (another plus for this particular model of the camera is that there are threads that will accept aftermarket tubes and filters on it) I can shoot at the equivalent of like 640mm (!). 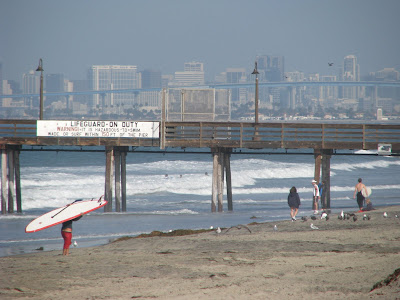 Photo: Here's an example of the camera with the extension tube attached at full zoom. A kind of cool by product effect is that the images are super flattened out... check out the background, that's the San Diego skyline with the Coronado Bridge smashed right on top of it. Of course we only care about what's happening with the stand up paddler in the foreground.

If you were to try to buy an SLR with a good quality 600mm lens you'd be spending significantly more money- plus you'd need a tripod to shoot from unless you spent huge bucks for a really fast piece of glass. I shoot all of my photos handheld (and, yes, they aren't tack sharp but I only publish to the 'net anyways) which is pretty impressive considering the amount of zoom I'm using. With the Canon Image Stabilization feature you can pull off those shots with relatively good results. 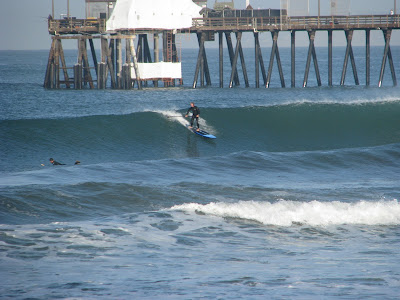 Photo: I shot this camera from really far down the beach, that's how I was able to get this angle (which I think is really cool!). The photo is definitely not really sharp- but remember this is hand held at max zoom with my extension tube attached. Not too bad for a guy who's just downed a 24 oz. 7-11 cup of joe... Kind of an example of the zoom capabilities.

4. Relatively rugged: I pack this thing with me all over the place- and I don't baby it. It travels in the bottom of my day pack, no camera bag. I like that there is no fear of getting dust or sand on the sensor like you would if you were switching lenses like an SLR. It's not bombproof but I've treated it badly from Baja to Mainland Mex and I've had no problems with it.

5. Lots of controls over images: If you want to go deep with this camera, you can- there are lots of dials, buttons, settings and other photo-geek gizmos to keep you fired up about it. I really only appreciate a couple of features but I've come to view them as important now that I'm using them frequently.

First, I really like the dedicated exposure compensation button that lets you bump up or down the exposure by 1/4 increments (I think). I started playing with that button a bunch during sunrise and sunset shots- or when I'm shooting against super bright backgrounds. I've had good results with it and I'm having fun getting different effects... best thing about it is that it was easy to use- I'm not a guy that pores over the instruction book.

I also like the white balance control in the program setting that allows me to change the set up when I'm shooting indoors under different types of light.

6. Extendable/flippable/large view screen: This is a great feature! You can flip the view screen and tilt it so that you can shoot from your belly looking down into the view screen- I find that the camera is less intrusive this way- allowing you to grab shots without people knowing. Even better, you can tilt it down and hold the camera up high, over your head, for different angles. It's a small thing but it is really cool. The camera also has an electronic rangefinder (essentially just a smaller LCD screen) that you can use to conserve power or if you want to just snap off a quick photo without flipping the big screen open. 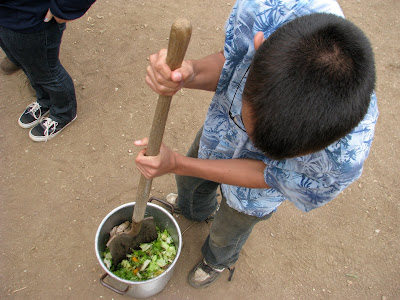 Photo: Here's an example of a shot I made by flipping the LCD screen down so I could hold the camera over my head and shoot down on the subject. Pretty easy to do, if your screen is flip-able!

7. Long battery life on AA batteries: I use rechargeables, they last a long time. Typically, I can charge them up and shoot continuously, both video and stills, for three days before I need to recharge. I bought my batteries and charger at Radioshack, the charger was cheap and came with a cigarette lighter adapter as well as a wall plug- perfect for travelling. Another plus is that AA batteries can be found almost anywhere- so you're almost never worried about running out of battery power.

8. And last- the camera has an excellent macro setting- you can take really great, super closeup pictures of bugs, flowers and other weird things. 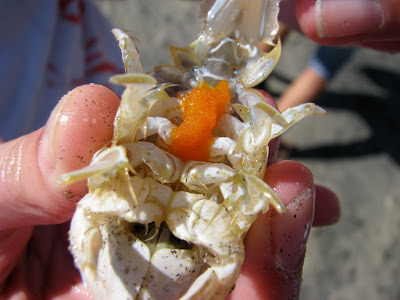 Photo: Here's an example of a photo I took of a female sand crab on macro setting- I'm not the best at it but this gives you an idea. Evidently, on super macro setting, the subject can actually be touching the lens and the camera will still focus!

There are a couple of downsides to the camera. Here they are:

1. I'd really like to have a camera with a super fast (large aperture) wide angle lens that would allow me to shoot low light pics with ambient light (no flash). This camera's lens isn't that fast and at low light you get a lot of shake- which I guess I could correct with a tripod but who wants to carry one of those around.

2. The camera does have a setting which allows you to hold the button and rattle off about two frames a second (a quick google search would give you the real number on that)- it's adequate but I think there are faster superzoom cameras out there- it'd be great to nail six frames a second like a D50.

Interestingly enough, with my camera you can hold down the button until the SD card is full- there's no pause for the camera to write the info to the SD card. On my friends D50 he can only rattle off so many continuous shots before the camera has to pause to write to his card. That means there's a limited number of frames that he can shoot- which would suck if it paused right when the good stuff was about to happen. My camera is slower, but there's no limit to the number of continuous photos it will shoot.

3. If you scratch the primary attached lens, you might as well throw the thing away.

My particular model has been replaced with the SX10IS which has been bumped up to a 20x zoom. With that particular camera your zoom is now close to what I can get with my extension tube. The model is super sweet and if I had the money I'd trade up.

A downer is that the new model no longer comes with threads on the barrel of the lens so, as far as I know, you can't put extensions and filters on it. And that sucks- because if you're shooting lots of water, sky and cloud shots, you'll want to use a circular polarizing filter to make them pop- I think you're out of luck until an aftermarket solution arrives (by the way, I do use a polarizing filter on my camera).

Hope this has been helpful- if you have anymore questions, let me know and I'll see what I can do. Keep me posted about what you pick up and what you learn from it... and if you ever need some stand up paddlers to shoot... come on down!