You don't have to be loaded to wake up to a million dollar view- you've just got to know where to go... and get up way earlier than everybody else. Here's my ocean front wake up call at the infamous Dog Patch at San Onofre. 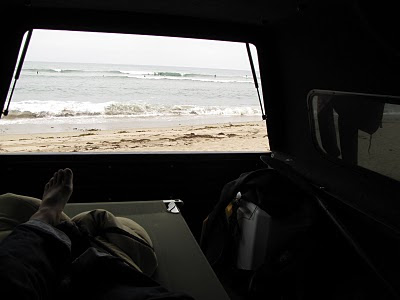 I grabbed that shot from the warm depths of my flannel lined sleeping bag- straight out of the back of my truck, twenty feet from the edge of the water, inches from the sand. The surf was pretty darn horrible and it was getting worse by the minute. Strangely, I didn't care, in fact, I was stoked and amping to get into my wetsuit.

I didn't wake up feeling that way- as a matter of fact, when I took a peek over the edge of my tailgate and saw how gray, cold and bumpy it was I started to get pissed.

Now what? I asked myself.

This sucks- came the answer. Fortunately, I'm not the kind of person who likes to wallow in grumpiness- and physical activity always seems to push away a generally pissy attitude. So, I gathered myself up and decided to embark on a little walkabout in the San-O lot.

If you've never been to San Onofre, the parking lot is something else. First of all, it's right on the sand. Second, it gets so crowded that once you've scored a spot you don't want to leave- so people come prepared for an extended beach day. We're talking major beach rigs: full RVs, killer surf vans, funky old VW combis and the ubiquitous truck/camper shell combo package. Then there's the hibachis, full size bbqs and every type of shade tent, floaty and beach chair you could ever imagine- they even bring special racks for their surfboards. It's very entertaining and I figured that, if I couldn't surf, at least I'd get an eye-full checking out all the highly specialized surf vehicles.

I saw all kinds of things on that little five minute walk through the lot. I saw a group of five girls standing around in bikinis- mind you, I was in full jeans, jacket and beany, it was cold! One of the girls was pulling on her wetsuit and she said, "Now we're only out there for, like, twenty minutes, right?" Another girl- possibly her mother said, "What?" "Are you kidding me? We are OUT THERE this is surfing- let's get it!" They all started laughing and wiggled into their suits- fired up to hit the water.

I walked on to the edge of the lot, to a spot where the beach bends a bit and forms a little left point. There was a bumpy little goofy wave bumping along the beach with thirty guys on it- mostly getting in each other's way but definitely surfing and obviously having fun. A little soccer mom van was parked a couple feet from me. On top of the van were two guys racking up four longboards, laughing, hair wet from their recent go out. The guys were stoked and looking healthy, vibrant and fired up for their day.

"So what do you think, boss?" One of them yelled out to me (I was standing on a log a couple of feet away watching the surf). I was surprised. "I think it looks fun", I half lied. "Oh man, it is sooo fun out there- never mind all those guys just go grab a few, everybody's stoked out there" the guy yelled back at me with a huge smile on his face. "There's all kinds of little lefts coming through, you just put your blinders on and paddle right through that crowd- you'll get some, you'll see- it's super fun!" he continued. "Yeah, you're right, I'm out there." I replied.

I turned and started walking back to my truck, only half convinced that I was actually going to follow through on my surf-declaration. But I started thinking about how that guy was going to look at his day after that sweet little session. It's a universal truth, the world looks a lot better after you've been surfing. He was probably going to head off to a Labor Day barbecue, laugh it up, feeling great after having paddled around for a couple of hours. How would my day compare if I just grumped it up and didn't paddle out? Then I thought about the girls in the bikinis and how fired up that one proclamation got them, "We are OUT THERE!" the woman said and like frogs off a frying pan those girls were hopping down the beach and going for it. The comparisons just keep ringing out in my head- surf and feel great, blow it off and feel like crap. Surf/crap, surf/crap... hmmm.

I'll take surf. And I did; it made a huge difference.
Posted by John Ashley at 10:50 PM