We did actually ride some waves that day in Northern Baja, problem is nobody wanted to stick around on the cliff and snap pictures. The classic problem, I'm sure I've spoke of it before. Kelly got out about a half an hour before me and after getting out of his suit, he snapped these two pictures of me surfing Bachelor Party lefts: 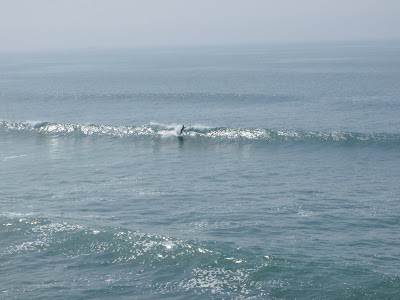 This was the second reef that I surfed that day. The first spot I surfed was about a quarter mile to the north. That spot was a little funky. Have you heard the term "slab". It's term du jour in the surf mags. A slab is usually a big, nasty, heaving wedge of a wave that jumps up out of nowhere, heaves farther out than it is tall, throws a filthy, almost unrideable barrel and then backs right down to nothing. Spot 1 could be described as a micro-slab. It had the heave-out-of -nowhere qualities (think jacking, vertical drop into a folding ten foot section) without the death defying side dishes. At a higher tide, it was tough to figure out and even tougher to paddle into.

Eventually, as the tide dropped, Spot 1 began to wall up and the death drop turned into a nice, head high, lime green left runner, good for a lip hit, a carving top turn and one cutback before it all dumped over onto a rock filled inside section. It wasn't a mind-bending wave but the crowd was right (me), the sun was out and hey, who doesn't like wrapping high speed, power-arcs even if there's only one per wave? Especially if you ride fifteen or twenty waves. 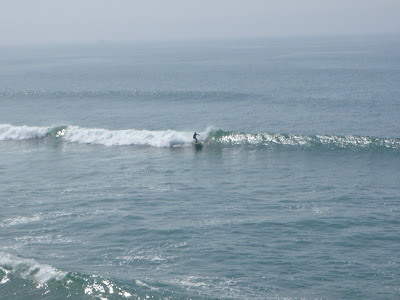 Kelly opted to surf the big, right hand, outer-bomby-to-inside-reform wedge that sucked in the West-ish swell and pushed it over the reef. I gave him his space- not like it was a problem, I had found my little playground and he had his. His wave was much longer than mine, he was surfing over a hundred yards all the way to the inside. I was behind the wave most of the time, watching from my little left hander but I could see that he was doing a good job of working that wave over. The new 9'2 Rusty LOL model that he was on is one fast little ride and from the fans I saw coming over the back of the wave, it seemed to turn really well.

The spot-of-the-day for me, however, was the left right out in front of the crash pad. Kelly called it Bachelor Party lefts and I hope get a chance to surf it again. It was a super fun wave with grunt, length and size a surprise given the fact that it looked pretty mellow from the cliff. We ended up surfing it at the end of the session. I paddled over first- probably a little deeper than I needed to be but I was chasing the mysto-left I'd seen from Spot 1.

Well, I did it right- the first left I snagged was a good two feet over head. That wave was pissed. Right off the bat, I was on my tippy toes free falling into a steep, hooking bowl section that looked like it would run right by me. The wave was so nicely formed that it didn't section and as I hit the first bottom turn, the 9'1 Stamps just got off its ass and squirted through that first little hook and out onto open face. From there, it was rail turn after rail turn, with a little squared up lip smash thrown in for variety. I know which wave I'm going to first next time I'm down there! 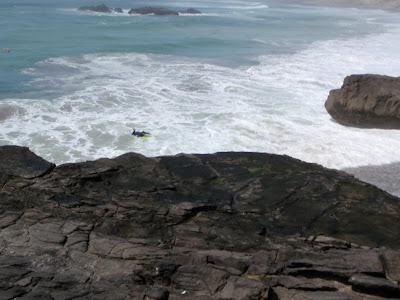 Paddling back in was harrowing. The surf wasn't huge but as the wave would line up square to the beach, it would feel the cobble bottom and double in size, pitching over and colliding straight up with the sloped shore. Bam- rock-shrapnel would fly up the beach, clatter against the volcanic cliffs and rumble back down into the wash machine landing zone. Coming in through that would take timing, balls and luck. I was hoping for two out of the previous three characteristics, knowing I could improvise or make something up to compensate for the missing piece. Here I am timing the sets and sprint paddling for the keyhole. 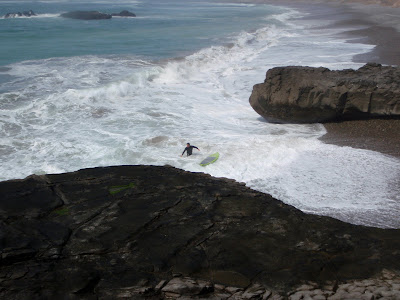 At some point during the paddle-in, you stop looking over your shoulder- you figure that even if you timed it incorrectly, looking back to see the monster coming for you does you no good anyway, so why do it? Well, in my case, what got me didn't come from behind- it swooped in from the side. A three foot sideshore wave freight trained me right in the death zone- knocking my board free and blowing the paddle right out of my hand. Yard sale, and all that stuff was getting sucked back down the berm right on top of me! 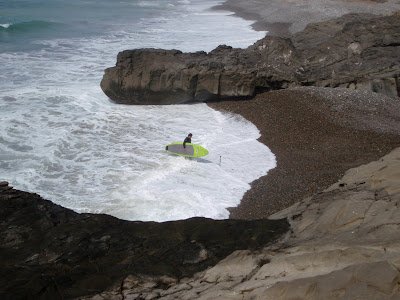 I had just told Kelly that I wasn't so sure of the usefulness of a handle in a performance stand up board. My mind is changed completely- if I wasn't able to grab that board's handle, flip it over and get those feet moving up the beach I would've been nailed. Here I am, board in hand hoping to get my paddle before it sweeps across my shins and back out to sea. Luckily, I pulled it and climbed out of that liquador unharmed. Not for the faint of heart- if you want to do this kind of thing you better be ready. 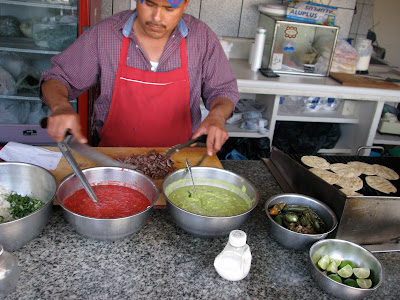 To the victors go the spoils and in this case, Taco Surf does 'em up right. Got a bucket list? Add, "Eat Baja tacos after surfing for three hours" on it. Sitting in the sun with a plate of tacos (six in my case, three or four in Kelly's), bragging, laughing and lying about the day's surf is one of the good things in life. Northern Baja's got it waiting for you, it takes some work and some know how but it's there for you if you dare. Get out there and get some.
Posted by John Ashley at 4:15 PM

Get a SENTRI pass already so we can do Baja every weekend!

I know, I know, I know... hey, do me a favor and write up a little run down of what that is and what's required for one to obtain such a magic pass... might be interesting to some of the readers here.

Been paddling at all? By the way, what are paddling these days... ?