P.net: I'm sure you've got some favorite shots... how and where did those come about?

Manny: Since '03 I've been putting together tours of some of my favorite bodyboarding spots. My tour company packages them all up and we uncork them onto the public. Costa Rica, Indonesia and Cabo are on the yearly list. Part of the package includes water shots so I get out quite a bit in some unreal conditions. But it was during the recent '09 trip to Cabo trip that I got one of my favorite photos.

Basically, it was the day I’d been waiting for- great light, surf and one of the best, arguably the best, bodyboarders in the world in the water. The wave was macking 5 foot shorebreak and Paul Roach was the only one making the drops perfectly. We lined up a few shots that day but one particular shot was unreal- that photo is going up on my wall for sure (ed. note, check Part I for a sweet shot of Paul Roach getting shacked drop knee). 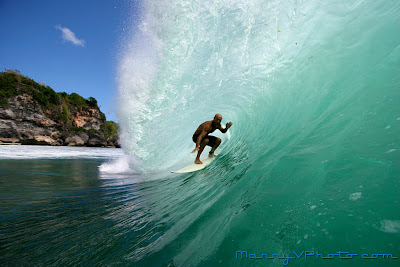 As for surfing… a Russian surfer living in Bali gets that vote. I was shooting Padang Padang and it was on fire! As I'm shooting, he goes by me getting barreled. After that wave he paddles over and says I should move over a little. So I did. He had this “I’ve surfed this place many times” look about him. So I listened. The very next wave we hooked up! It was awesome. I still see Gene Kreyd when I get back to Bali every year. He’s a cool dude. 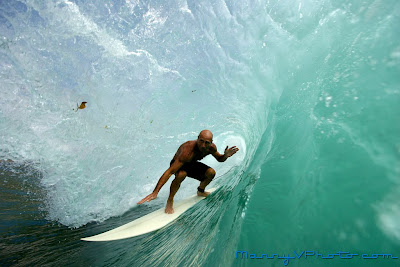 Manny: Every session is different. My most difficult one was shooting a group of bodyboarders over this reef on Maui. It was about three feet deep and about 4 foot Hawaiian. When the sets came in, the water would drain and I was floating about 1 foot above the reef with all limbs extended and the camera out of the water. I did this for about a couple hours and it just got too dry. Yes, I got a scrape on my knee- but the housing was untouched! Ha! 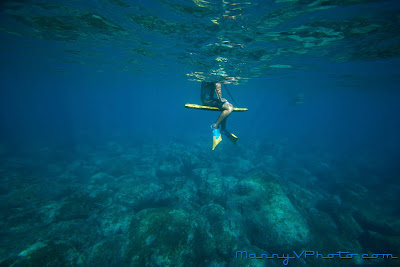 P.net: Anything funny ever happen out on the road?

Manny: I get funny about my gear. A couple of years ago, I was driving a crew around in Costa Rica in a 15 passenger van. Along the way, we picked up a few other people. So I had to pass my camera bag back to the rear. I'm keeping my eyes peeled on my bag through the rear view mirror as it's getting passed back. I keep looking back checking it out. Finally, I can't stand it any more and I pull over, throw it in park and grab my bag. I ended up driving with it on my lap the rest of the day. Yeah, that wasn’t really funny, huh? Shit. I’m anal about my camera gear!

Here's a little sketch story: I was in Cabo San Lucas after my group had gone home. My wife and I stayed a few extra days to wind down. We went out to Lovers Beach and it was cracking. Glassy and heavy. I had my camera and headed out. I grabbed a bunch of empty wave photos- cool stuff, great light, no problem. Just then, a set rolled in and I turned to take a shot of the first wave. That was almost a disaster, it was the worst thing I could’ve done. I came up after that wave, paddled hard and fast to get the next photo and was caught. The last wave of the set was coming and I didn’t think I wasn’t going to make it. Luckily, the waves were throwing out about as wide as they were tall or I would’ve been gonzo. I came in after that- straight to the beach. 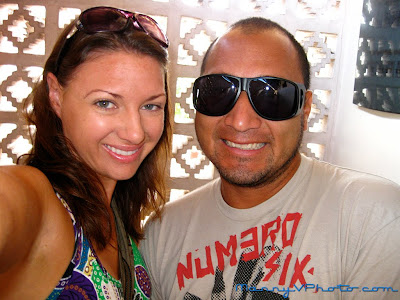 Photo: Manny and his wife Mailei

P.net: Have you had any of your shots published?

Manny: I’ve had photos published overseas and nationally. All in the bodyboarding scene. But it’s just a matter time before I get some surfing photos published. I’m working with a few great surfers and we’ve been connecting... but I'm still shooting for that one magic photo.

P.net: Where do you like shooting, land or water?

Manny: I love the ocean. I want to be in the water and with the lens I use, I have to be in your face. I love getting as close as possible without getting a fin to the head. I’ll eventually get a longer lens for shots from the channel but I prefer getting in the barrel.

Check back for Part III