Waterphotography with Manny Vargas: Part I

I'm always stoked to run into Manny Vargas- the guy is hilarious (ask him about surfing in South Africa) and is super talented at stuffing himself into the barrel on a bodyboard and at being in the right place at the right time to score killer water shots. Here's the transcript of our little beach side chat (all photos courtesy of Mannyvphoto.com):

Paddlesurf.net: Hey Manny- thanks for the water shots. Why don't you give us a "for-the-record bio of yourself?

Manny Vargas: Sounds good: Born in National City, raised in Imperial Beach from the tender age of fourteen hours. I've been bodyboarding professionally since 1985, surfing now and again during those years. I was a lifeguard at Silver Strand State Beach from '93 - '96. Lately, I've been shooting water photography basically since '05. 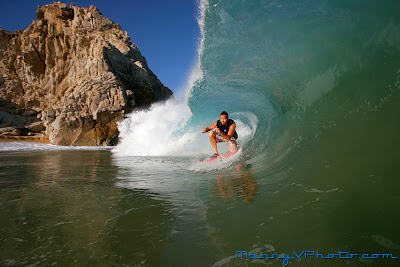 P.net: How did you get started doing water photography?

Manny: I was fortunate to start my professional bodyboarding career with one of the best surfing photographers out there, Jeff Flindt. Jeff and I were both perfecting our trades as we went on world adventures, he was snapping photos and I was surfing perfect waves. When we hooked up on an awesome photo we'd both be stoked on it- that's the part that I really enjoyed.

I learned so much from watching Flindt, he had a killer work ethic and his camera care regimen left a mark on me. It was cool to watch. When I got my first water setup (Canon 20D and SLP Waterhousing) back in 2005, I was hooked! I was now on the other side of the lens seeing the stoke of riders when we nailed a shot. It’s an awesome feeling. 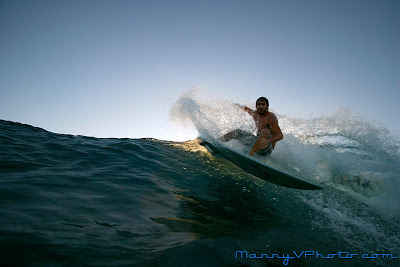 P.net: Who were the water shot guys that really stand out in your mind?

Manny: I grew up and bodyboarded in the old-school age of film… when photographers would have to paddle in from heavy surf after taking the 36 photos per roll that they were limited to, load up a new roll and then head back out. Again, Jeff Flindt was cool to travel the world with and learn from. But then there was Aaron Lloyd.

Aaron Lloyd was the boot camp photographer. He's a cool cat to hang with and talk story. But if the surf was on and the lighting was crisp, you better perform. There's a trip I remember vividly… it was in '89, I was part of a crew of five bodyboarders sent to Puerto Escondido for a photoshoot. One day it got good, 5 - 7 foot Hawaiian and it was heavy. Aaron paddled out with us right into it. 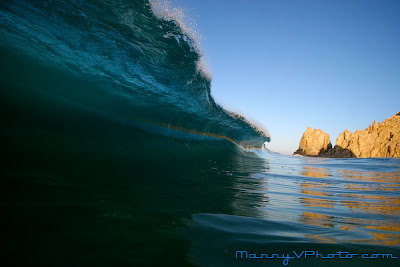 I was lucky enough to go big and not each shit right in front of the camera. But the other guys were blowing opportunities. I remember seeing Aaron come in from the beach with his pole cam in hand and his legs scraped and bleeding. And he was pissed off. He put himself in positions to get the shot but the rider(s) kept blowing it and he’d go over the falls. That’s when I realized that the photographer can’t make something out of nothing. When it comes to shooting wave riders, it's a two way road. If both perform, magic happens.

Check Back for Part II