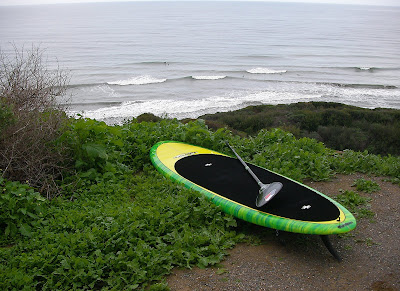 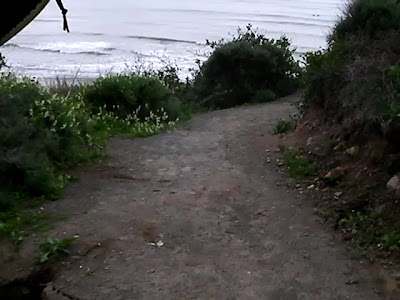 Had a lot of fun hitting the road and surfing someplace new. I like to leave early. Get on the road early enough and you're the King of the Coast. Zoom up PCH, pull into any parking lot, snag front row at Swami's- whatever you want, as long as you're on it at dawn.

I get up before it's light, toss the wetsuit in the cab of the truck (I remember as a kid reading how Tom Curren would put his down on the floor by the foot heater to warm it up- been doing it ever since), grab a big cup of coffee and an old fashioned buttermilk bar from the Cambodian guy's Donut Shop, throw on what ever the hell I feel like listening to (Bluegrass, or HeeHaw Hell recorded on my portable satellite radio) and burn some fuel.

Call it gross, fat, American wastefulness but there's something about rambling up the coast in my 380 horsepower, full size 4x4 pickup listening to some guy sing about "drinking brown whiskey and telling white lies" that will appeal to me 'til the day I die. I don't call it exhaust, I call it freedom's perfume. Before you choke on your wheatgrass, no caff., latte- (hold the soymilk) let me say that every other day of the week I'm pushing my beach cruiser down the street to work. So if I get a chance to burn a little 87 proof once a month I'm going to take it.

The surf ended up being chest high and fun. We walked into a spot that some of you will recognize and some of you'll want to know more about- a little homework or a nice email and you'll get your information but I won't name it here out of respect for the spot. It's not the best wave in the area but it does provide something that is tough to find here along this crowded California coast: open space.

We had miles of little reefbreak all to ourselves it was a nice change from dealing with the crowds of San Diego and it was just up the road. I'm already thinking about how we should really do this place. It would involve two vehicles, an insertion and extraction point and about five miles of surf cruising. More and more I'm beginning to think that this strategy is going to be the one we'll need to adopt or emphasize as our numbers grow. Let's face it, we aren't welcome everywhere but if you're just "playing through", it's harder to heckle a moving target. Hope you scored something today as well.
Posted by John Ashley at 8:52 PM

man it was raining this morning at 6 A.M. so I decided to go back to sleep...lame I know, but about your spot

I just sold my car and have a little beater truck, I'm thinking about building a surf rack like Chad's (one where the boards go over the cab) I would be so down to voulunteer my truck to go with you guys what you think?

Not a bad call at all! There was over 100 million gallons/day coming out the boca rio so good idea to sleep.

Little beater truck is the perfect surf mobile! You should scour craigslist for a thrashed lumber rack to put on it then you've got the full on paddlesurf cruiser- perfect for surfing northern baja- assuming it doesn't break down while you're there.