They're still out there 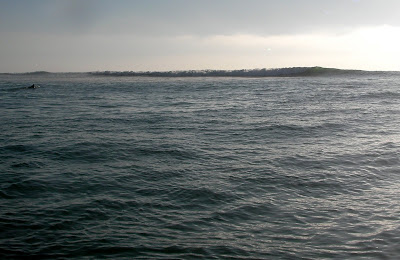 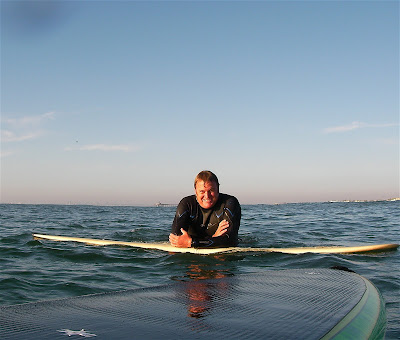 We go back to work but the surf just keeps pouring in, all under sunny, warm skies. I got a report from my brother up in Santa Cruz; the surf's been firing! The guy's a nut too, he's been trunking it! The water's freezing but the air's warm with lots of sunshine- he say's it's do-able, I say he's crazy.

Out of the blue a good friend dropped in from Southern Baja. Tim Hatler is the owner/operator of Palapas Ventana down in La Ventana, Baja Sur. I've posted pictures of him surfing a perfect left point break down near his home, if you're a goofy foot this is a spot you'll want to ride before you go for the big dirt nap. We had just enough time to drink a beer, grab some boards and get in a quick surf.

Tim says that stand up paddlers are becoming more common down in the La Ventana area. You may remember back in July of '07 when this blog was born, I reported on a trip I did down to Cabo San Lucas and back. My brother, Big Chad and I paddled La Ventana that summer and found that it's a flat water wonderland for cruising. It turns out that in the winter, when La Ventana becomes an internationally known kitesurfing and windsurfing hotspot, the prevailing Northerly winds create small, fun waves that break in the Sea of Cortez. Even better, the best spot is a left reef/point right in front of Tim's resort. According to Tim, the numbers have increased all winter long- like we all know, this sport is growing. I've still got a dream to bring some fly some paddlers in and show 'em the Baja I know- we'll see. Interested?
Posted by John Ashley at 9:13 PM

Great to see Tim and hear about PV. Let's get a group together and head down there again! Did you see srfnff's blog with pictures of him on the Mahi-1? Check it out: SRFNFF

You guys are killing me! Here I am working a day job and trying to build a board in the garage, and you guys are out there just KILLING IT. In trunks no less. Truth be told, Nancy and I snuck out for a longboard surf on Sunday, and while I had fun, there was a look of envy in my eye every time one of the stand up guys made a nice wave. I'll have to settle for living vicariously through John, Michael and Gary until I "gitterdun".

Here's a peek at the Waveyarder as of this week: [url]http://img.photobucket.com/albums/v408/andygere/Stand%20Up%20Paddle/IMG_3504.jpg[/url]

Glad to hear from you... can't wait to see the Waveyarder in complete form!

Looks like the board is working out well- good to see everybody's digging it!