Here's what it looked like... and here's what I got. 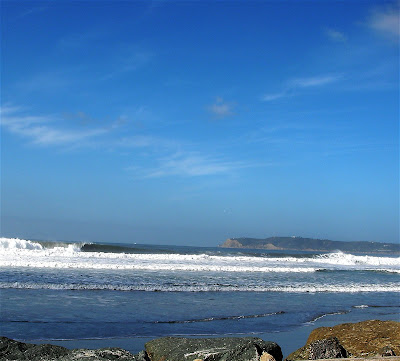 Strike three. Everytime I set up these great expectations for surf, I get shut down. If you've been following the blog, this is the third time! Not to say that I didn't get in a great paddle out to the point and back, and there was some excitement (I'll get to that in a bit), it's just that I was hoping for so much more.

Photo Left: Here's what I had to think about all the way to the point, visions of sugar plums dancing in my head. The point in the back ground was my target.

Here's how the day played out: Up early and out the door to get to the kick off spot while it was still low tide. The plan was to paddle against the new rising tide so that I could surf and return while the tide was still filling in. I learned my lesson last time, fighting an ebbing tide tide through the narrow mouth of a big bay is not fun at all, in fact, it's brutal. I much prefer fighting it on the way out and then paddling downhill home.

The surf looked big and grunty on the way up the Strand and to the launch point. I thought it'd be perfect for the point I was headed to surf. I knew the point I was aiming for was really a summertime south swell spot but I figured it might pull in some of the big surf we were getting hit with and bend it into something manageable. Wrong. Either there was way too much angle on this particular swell or the place can't pull it in on a low-ish tide, whatever it was, it wasn't really working.

There were some raggy sets coming through but nothing close to the wave I know the place is capable of producing. I was passed by two sets of jet skis with boards and sleds each heading for the outer break that pulls in even more swell, those guys checked it and turned around too, the point just wasn't working today. 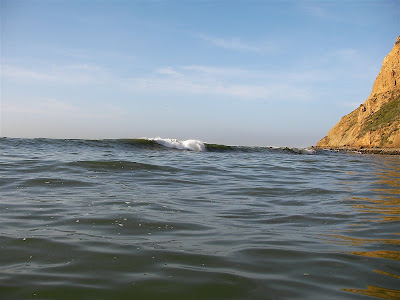 Photo Middle Left: The point not quite doing it this morning; a little morning sickness screwing up the works.

I will log data points in my black book though, I'll record tide and swell direction and use this to help pinpoint the right conditions for the spot for future trips. If you look at it from that point of view the trip was worthwhile. I'd also like to let you know that early morning paddles through the bay and out to the point are pretty interesting. You can really get jamming in the glassy water and there's a lot to see.

The highlight of my trip happened on the way back home. I was jamming with the filling tide back into the bay. Since the tide was pushing in I was hugging the channel markers to take as much advantage of the moving water as possible; I was head down and powering.

I now believe that Navy Destroyers are powered by silent engines! I didn't even see this huge Navy ship until it seemed like it was right on top of me! In reality, it was a long way off but those things are amazing, especially when viewed from a 10' chip of foam floating on the water. 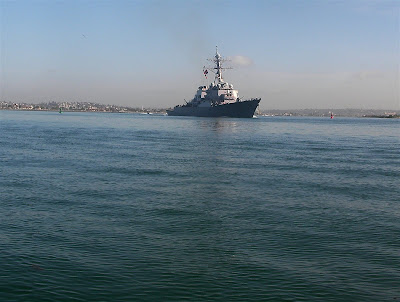 The ship was coming around a bend in the channel so at one point its bow was pointing directly at me, I was jamming to get out of it's way and it seemed like it kept turning for me. Once it finished it's turn all the excitement was over and it passed by a couple of hundred yards to starboard, man that thing was big! I can only imagine what one of the big carriers would look like from my Stamps 10'0- I'm going to have to check that out one of these days!
Posted by John Ashley at 4:42 PM

First off...great pics! Good documentation of your day, and I agree, nothing ventured nothing gained, and today you gained some knowledge and had a little adventure...very cool.

Question though...could you have hedged your bet by launching at the cliffs and paddling to the point from the north? Could you have surfed your way there at the numerous reefs along the way?

Actually, I was surprised you guys got as much swell as you did. It didn't last long though.

Thanks for the compliment.

Yep- could've done it but it would've just about killed me!

Tex and I did that paddle on Saturday and it was pretty brutal- it's a really long way- if I can figure out Google Earth I'll calculate just how far the round trip is- it seems long. And with some pretty big surf, alone- I'm not quite that brave yet.

Nope didn't last long- Rincon was really good today, a friend sent some photos that make me think I should've made the drive!

Kind of a crazy swell!

I remember it being a really long way, not that I ever made that paddle myself. And I'm with you 110%...don't do it alone! My version of that trip would have been to put in at the Cliffs, surf through to Newbreak or White House, look at my watch and call it a day...chicken shizit mofo that I am!

john looks like the hotel was going off.paddleup sweetwater river today only made up to n.c.bvld.tide too low.going to wait for 6'tide i think i can make it to second ave.captneg9

hey I saw that destroyer leave the bay when I was at work, yeah those things are big and cargo ships and carriers are gigantic! I'm checking it tomm. morning I haven't been out in a while