The San Diego I know and love! 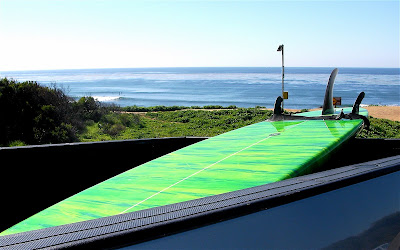 Great day of surfing down here in San Diego. Storms have blown away, water's fairly clean again and there's still some swell in the water. I jammed out of my little beach town to a spot I knew would handle the little NW breeze that was messing up my home beach. Also, the tide was dropping low until around 3:30pm so I knew I'd have a shot at it before the low water killed it.

I scored. It ended up just being a great session, waist to head high waves, breaking over a clear water, rock reef. There were about 8 manuals on the right, none of them were even trying for the left so I hopped on it. I should mention there were two other stand up guys on the left before I got there but there were so many waves that we were rarely ever standing around waiting, we just did laps from the inside to the outside. Super fun time, I must've surfed fifteen or twenty fun waves, five of them being real jewels. Think head high, nicely tapered, green racetracks that allowed a couple of cutbacks and some speed carves before dumping in the channel.

It's fun to surf different waves then you're used to. At home, 90% of the riding we do is in real fast beach break. You've got to have quick feet and find a way to make sections or you'll never get an opened face wave. Here on the reefs, the wave is so much more predictable- there's no need to start the wave angling for the shoulder- you can get real casual once you've got the wave figured out. I wasn't able to get enough push to really hook a turn in the lip but I did get to the point where I'd straighten out a bit on the take-off getting out into the flats before I'd put down some tracks for the shoulder, it felt good to fade a little pit back into the pit. That's my session, hope you scored too!
Posted by John Ashley at 9:32 PM

the place looks familiar!!!! no calls ????? What happened ? This week end let s hook up

hey john: this is totally off topic ... but i'm coming to the west coast next week and was thinking about starting in san diego, seeing joe blair, then driving up to seal beach, seeing tim stamps. do you have any thoughts blair vs stamps re pros and cons, why one over the other and so on? i know blair is into unique fin placement and concaves in the bottom. what about stamps? what's he into? i believe you started on a big red. i'd be coming off a jimmy11. basically, what i'm looking for is identical (or better) stability in a more surfy package; plus a board that will do well on micro-ripples (my typical summer surf) and on the 4-5' days. any thoughts you'd care to share? i came away (slightly) richer from a recent vegas trip, and the money's burning a hole in my pocket ... thanks!

Very nice, and a beautiful day! It looks just like it did 43 years ago (minus the solar powered callbox) when I surfed the cliffs all the time. Brings back good memories...the essence of some things just don't change all that much.

Hey Linter- I wish I would've checked my own blog before I went off an posted a monster response over at the 'Zone!

I can tell you this, I came off my Big Red to a 10'x 30"x 4.5" Stamps (commander model) and the Stamps was way more stable then the Big Red. And it surfed 100X better, for bigger guys around here (210 - 260lbers) Stamps has made some fantastically versatile sups- and they look good too.

Get ready, there is a different feel to the eps epoxy handshape compared to the molded boards (like your Jimmy L.)- I think it has to do with the flex, I'm not sure- but if you surfed before you got into stand up, you'll instantly recognize it- the customs feel like surfboards! Also, they're a bit more heavy then the molded boards (and I think that Jimmy's really light isn't it?) but I never minded it.

I've never ridden a Joe Blair board but I've seen some of his shorter ones, they're pretty full bodied because he pulls the nose and tail in on those 10'ers. The guys I've seen all liked there JB's- he's definitely a master craftsman who's been in the game for many years.

If you're coming out over the weekend of the 16th, I've got Friday to Monday off so I'm going to be paddling quite a bit. Email me at www.paddlesurfbaja@gmail.com if you want to hook up and paddle. You can try out the Stamps and I've also got a big 'ol carbon fiber board you're welcome to try too. Let me know (bring a paddle though, they're the limiting reagent in this paddlesurf equation).

Hey Tex- didn't think you'd be around or I would've rang you up. Sorry homey- this weekend is looking really good for some point antics though. Let me know.

Gary- that place is such a treat- you'd love to paddle it, the call is to paddle down past 33- endless unridden potential that way. If you're ever down this way, we're on it!

hey, john: i'm still working on my plans but if i get it all sorted out to my satisfaction, i'll for sure give you a shout. traveling w/ a paddle, though, is a problem.
yeah, i posted here first; but then when the post didn't appear, i figured it'd gotten lost in the ozone. anyway, thanks for the additional stamps info. it's actually the commander model that appeals to me most and i sure would love to give one a try, though i sincerely doubt my ability to successfully stand on it for more than a couple few seconds or so. i do know the surfboard feel of which you speak, and i think i'll dig it. hmmm. even baring a paddle to use, maybe we could get together and i could just flat water demo the thing for a few minutes. i'm not worried about the surfability of the board so much as the stability. might that be possible? thanks again ....

man you won't beleive how sweet my truck is now and is going to be, but get this I have a manditory meeting for work at 9 tomm. so I gotta get wet at 7 exactly and be out by like 7:50 at the latest...lame but will I see you there?

Linter- no problem paddling flatwater- I've got a great spot right down- just email me at www.paddlesurfbaja@gmail.com and we'll hook up.

Gabe- truck looks cool and you got a good wave on the little clip!