THE BIG CHAD REPORT: The Board I Ride 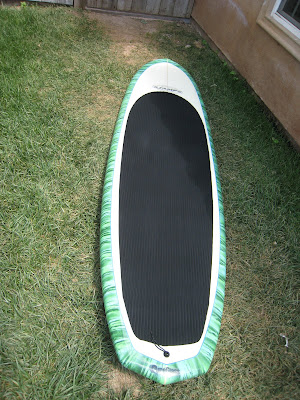 So I get an email from some jackass asking me why I ride such a small board when I am such a big guy. John dubbed me "Big Chad" and there is just no way around it, 6'4", 270 is not small. SO maybe to question the reason why I ride a 10'0 board is justified.

I started out on John's first board just days after he got it. It reminded me of when I was a kid. My friends and I were all riding boogie boards because that is what kids ride, but when one of my friends got a surfboard we were all on the beach taking turns. So there we were, a bunch of adults all suited up in our wetsuits waiting for our turn on the one stand up surfboard in the neighborhood. John had the Sean Ordonez big red which was 12'0 long and I think 29" wide (I could be wrong). I remember when he described it to me I though it was so big, my biggest surf board at the time was 10'0 long and maybe 23" wide. I thought it was big until I tried to stand up on it the whitewater of a not so popular surf spot at our home beach in February. 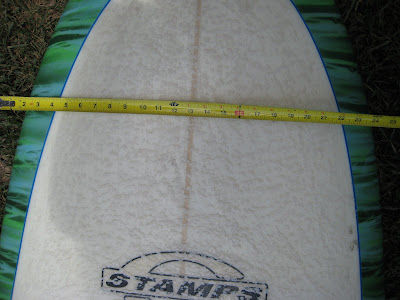 It was a difficult task, I had a lot of trouble doing it. I fell at least 50 times my first time out. I was almost ready to accept defeat and walk away believing that I was simply too big to participate in this sport.

While searching craigslist for some stand up paddle board deals I noticed a lot of people were trying to sell their regular long boards and windsurfer boards as being big enough for stand up. I knew there was now way that was going to work 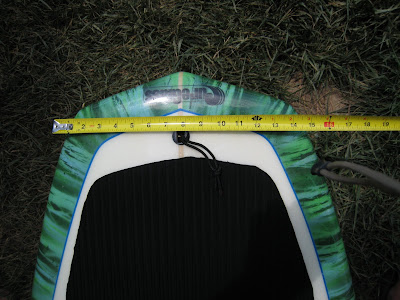 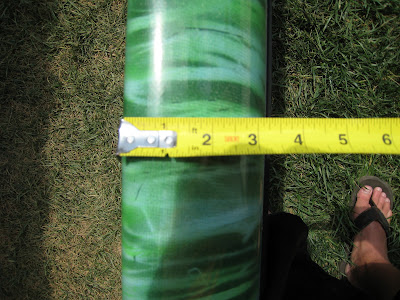 better while still having the ability to paddle fairly well. I thought cruising down a wave, walking the nose, pumping a little and pulling the occasional cutback and floater was going to be the pinnacle of my surfing ability on a stand up board. I had seen smaller guys do more on smaller boards, but there was no way that I could ever go smaller, right?
Wrong, so wrong. John got his first Stamps board and I couldn't wait to try it. I knew it was 10'0 and I would probably sink it, but I wanted to catch a wave on it. It wasn't easy. But every time I was in the water 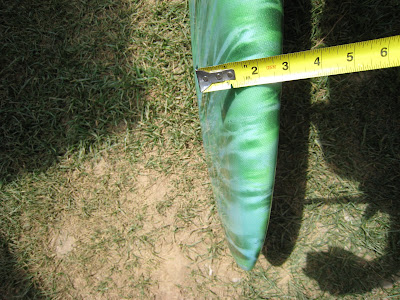 with John he would always let me switch boards with him for a few waves and his board unlocked things for me I never thought would be possible. I could haul ass down the line on his board, I could pump the board at will, cutback clean turns, put the board up high in the wave, all kinds of fun stuff. But it was when I finally converted my speed into a off the lip floater, even though it was a small day, that I was sold on his board and had to get one of my own. The board may be only 10'0 but it is still 30" wide and has plenty of floatation from nose to tail (it's pretty thick all the way through. You can see from the photos I took where the girth is in my board. The nose is right around 22" wide and about 2" thick, the tail is around 13" wide and also 2" thick.
It is also pretty flat so that almost the entire board is in the water at all times, also helping it float. I sometimes forget that I am on a stand up board when I am surfing a wave. It is very fluid and very fun to ride. I did sacrifice some paddling speed and I definitely fall more often, but definitely not too small!!
Stand Up Paddle Surfing Lessons in San Diego are in full effect! We've taught more people in the last three weeks than May, June and July combined! Don't miss your chance to learn how to stand up paddle surf while you're here in San Diego. We've put over a hundred students onto boards- you could be next! Email (paddlesurfbaja@gmail.com) or call (619 213-6622) for availability.
Posted by Chad at 10:33 PM

chad saw ya pulling into the cays.about to give a lesson i guess.paddle center st.super glass.but there is A WEIRD COLOR TO the water its muster yellow.nice report on the 10'0.i thinking about a 9'4"captneg9

Good story Chad...you may put John out of business. Did he say he was ready to retire? Ha-ha. Keep up the good work.

CaptNeg9---Yellow color? Didn't notice that. A 9'4 would be sweet. Unfortunately I think with a guy my size 10'0 may be my limit. But we'll see. I know John is eyeing a 9'6 and I am sure I will have to try it after he breaks it in.

srfnff---Thanks man! I am just hoping I did good enough to be able to hang out for a while and stay involved. I am finding out that this is pretty fun.