The best way to get down to Mexico is on Alaska Airlines. Specifically non-stop from LAX. If you don't fly non-stop expect for the trip to take around ten hours with a layover in Mexico City. Our flight lasted close to five hours- enough time to read a couple of chapters, work a couple of crossword puzzles and down a few beers. You'll drop close to five hundred dollars for that round ticket and another seventy five dollars to bring your stand up board with you. That's seventy five dollars each way- so expect to spend a hundred and fifty dollars total to get your stick there and back, unless you're the friendly type and can talk the fee down a bit (which I did).

Speaking of traveling with a stand up board, here's some answers to questions that I know have been floating around out there. Yes, on Alaska airlines I was able to bring along my 10'0 Stamps- even though the "official" policy restricts the board to 9'4". It seemed like the ticket agent just wanted to know if it was a longboard ($75) or a shortboard ($50). I traveled with the an 11' bag, in the future, just to keep things neat and tidy (and looking as small as possible) I'd spend a couple of hundred bucks and pick up a bag to closely match the board's size.

I did pack my Quikblade paddle in with my board- and in the future I wouldn't do this. I think that the paddle may have been damaged by the crew who had no way of knowing it was packed in the board bag. The paddle snapped on my first wave- resulting in the manufacture of an 8lb Franken-paddle, more on that later. The next time I head down, I think I'll try to manufacture some type of full foam wrap for two paddles (I WILL NEVER AGAIN TRAVEL WITHOUT A BACK UP PADDLE) and check it in as a fishing pole (no charge). Or I may look into a two piece travel paddle and try to carry it onto the flight. 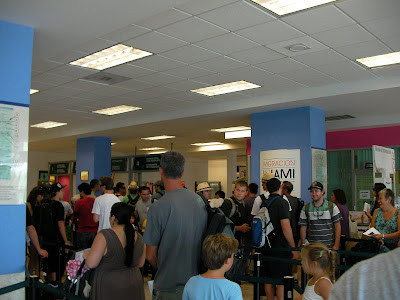 Arriving in Mexico, you'll have to check in through Customs. Bring a pen, everybody will be scrambling for something to write with so come prepared. Read the thing carefully and make sure you fill it out completely- there's a second little section that everybody forgets to fill in and sign. The declaration requires two signatures- if you blow this, you'll have to step out of the nasty line and fill it out correctly. You'll receive a little stub of paper that is your Mexican Immigration paper, your tourist visa- put it somewhere safe. When you leave Mexico you'll be asked to produce it- if you lose it, you will pay! 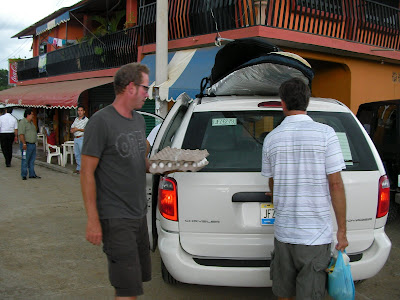 After clearing customs and picking up our car we ran up the coast to the little town we'd be staying in. There's a great little market nearby where we could load up on eggs, beans, tortillas, queso seco and some Buffalo salsa. I couldn't resist picking up a pineapple, some bananas and some great mangoes. We also bought a ridiculous amount of beer, tequila and rum- just to make things interesting. 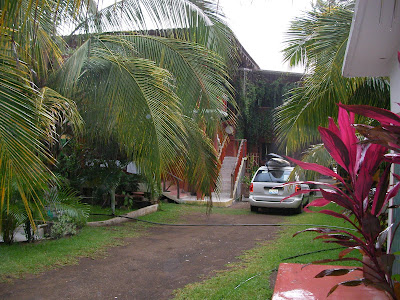 This is the back end of the house we were staying in- there were cool tropical plants going off all over the place. I was blown away by how lush that part of Mexico was- I thought it was equal to the rainforests I'd seen in Costa Rica. There were plenty of critters running around too- iguanas, geckos and many sea turtles swimming around. The place was very much a tropical setting. 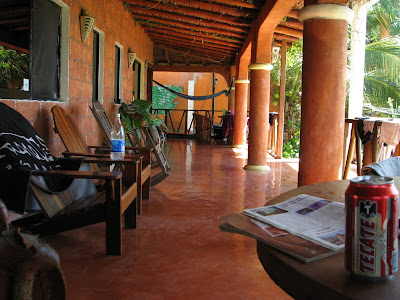 This lanai was swept clean everyday by Angel the caretaker. The whole house was made of concrete which kept it nice and cool. The lanai was shaded by the second story overhead as well as vines which grew up the walls and along the ceiling. There are comfortable tables and chairs as well as hammocks hanging all the way around the house- whoever designed it knew something about surfers. We spent many afternoons just hanging out here until we got the urge to walk across the lawn and out into the water. The best waves coming down the point would peter out right at the entrance to our compound. If you rode one from the top of the point all the way to our gate it was called a "home run". I dinked a few out of the park while I was there- an easy feat on a stand up board. 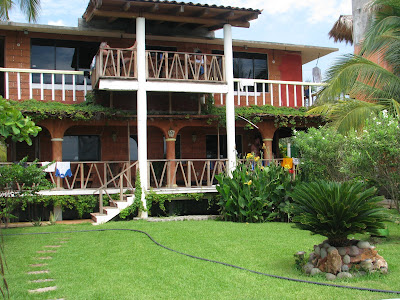 Here's a full frontal shot of the compound. You couldn't ask for a better equipped surf house. Each room had its own kitchenette with stove, refrigerator and sink as well as ice cold air conditioning and comfortable and clean beds. We also got our own bathroom which was cool because I ruin those things.

Stand up lessons in San Diego (call 619 213-6622)! Here's your chance to learn how to stand up paddle surf in San Diego, California. All lessons are private (unless you want to bring along a friend to share a laugh with) and come with a knowledgeable, caring instructor who will take time to teach you how to do things the right way- yeeeehaw! Email us at paddlesurfbaja@gmail.com or give me a call at 619 213-6622.
Posted by John Ashley at 9:28 PM