Stand up paddle etiquette: I was careful to keep a low profile out at the point and at "Reverse Trestles" (RTs, the spot just up the road). The wave at the point was pretty much tailor made for a goofy footed stand up paddler and it could've gotten really ugly; if I wanted I could have owned that place, swooping into whatever I wanted. 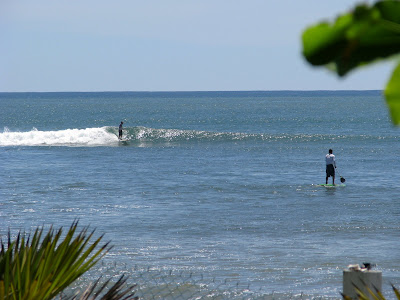 Maintaining harmony in those lineups those wasn't too hard. I just practiced good paddle surf manners and thought about how others might be feeling about me being out there. Simple stuff, actually. Here's a couple of examples:

I never paddled past everybody right to the head of the line (top of the point) after snagging a set wave. How'd you like somebody to cut in front of you while your waiting on your personalized license plate at the DMV (here's a good one: SUPGEEK or OARON)? Chances are you'd be pissed off- same for those in the water.

I sat out a set now and then. Sometimes I'd give away a sweet one to a crawler. Charity goes a long way. And guess what? The Wave Karma Counter in the sky is keeping records- I swear mysto-outside swing-wide monster walls came to me with frequency.

On my way back up the point from a long set wave, I'd stop halfway back and hang out for a set or two on the inside. Just to give the guys at the top a chance to surf without me around. Also, you'd be surprised at how many good waves I caught when guys blew it on set waves and couldn't connect to the inside.

Paddle away. On days with a crowd at the peak, especially at RT's, I'd paddle down the beach, past the Main Event Peak to the three other waves that were totally empty. A peak a hundred yards away was firing off it's rocker and completely empty! A simple five minute paddle and I was on my own, living out my own Indo-boat trip fantasy. Don't be afraid to paddle away!

I had no problems paddling out down there. Nobody shouted me out of a spot and there were no hurt feelings. As a matter of fact, I was told by a local guy that I had really good manners. That was a nice compliment but my vote for Best Manners goes to the ten short board rippers that we ran into from Newport.

These guys rolled up to RT's a little late. They all piled out of their suburban at once. They were a cloud of Hurley board shorts and Volcom hats. The guys ran up to the berm and watched the four of us ripping the head high, crystal blue waves at the main peak. We saw them from the water, an insta-crowd we thought. What a bummer.

But then they did one of the coolest things I've ever seen a group of young surfers ever do; they walked away. They all trunked up and walked down the beach to a lesser peak, which they absolutely tore to shreds, having a great time with all ten of their buddies next to them. These youngsters understood one of the unwritten rules of surf exploration: if you stumble upon a peak that's already being ridden, you find your own damn wave. And if you're traveling in a pack, you definitely don't bum everybody else out by paddling out in a swarm.

These guys could've come right out and dominated the session. They were excellent surfers. We didn't own that peak, it was an established surf spot not some mysto-break that we'd found through diligence and hard work. Somebody had taught these youngsters well, they were clued in. Young as they were, they were self-aware of their presence and understood the impact they'd have on four guys having the time of their lives.

I've forgotten most of the good waves I surfed during that session but I clearly remember the impact of that gesture. If I can similarly blow somebody's mind by being respectful and practicing good paddle surfing manners than I'll do it every time. Hopefully you will too!
Posted by John Ashley at 9:01 PM