Imperial Beach local Hans Fernan has kicked off his paddle to save California's State Parks. He'll be paddling the length of San Diego County heading uphill from Imperial Beach to San Onofre State Beach. If you're not aware, this is the wrong direction to paddle the coast since the prevailing winds and current run from the north to south. Which means that if you're not ridiculously gnarly, don't even think about it.

Hans' first leg went well as he launched September 2nd, from the United States/Mexico border and paddled up to the coastal city of Coronado. Hans plans to knock out the seventy plus mile paddle in a week logging ten to twelve miles a day. Scroll down to Hans' press release for more information or go to WildCoast's web page and get the whole scoop. Also check out Hans on the morning news at KUSI . 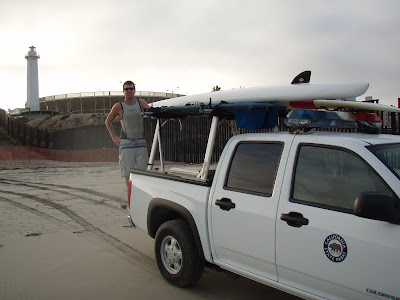 Can't get much further south-west than this on the continental United States. That's the fence between the United States and Mexico in the background- check out the bull fighting ring too. Go get 'em Hans!
Posted by John Ashley at 4:19 PM