The Fin Vortex: It'll suck you in!

So when it's raining outside, what else is there to do but mess with your equipment? Here's what I've done: I've taken a perfectly good fin set up and switched it all up. It's called the fin vortex- be careful once you get caught by it you'll get sucked in. 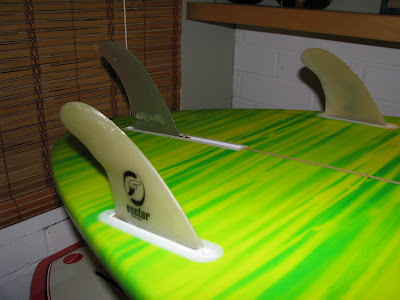 In this case I broke the first rule of fin experimentation. I changed too many things at once. Ideally, if you really want to find out what your fins are doing for you, you'd conduct a logical experiment. First you'd take all the fins out and go for a surf. That way you could establish a baseline of observations; that's your control group- the data set to compare all of the following changes against. Next, you'd add just one fin, in a marked position and try it out. The tests would proceed from there- changing one variable at a time.

But that's not what I did. By now, having been cooped up by rain and cold and foul weather. And cursed by no surf; I'm operating purely on emotion. So I decided to find out what would happen if mixed it all up. Here's what I did: I came down from a 7" middle middle fin to a 6" fin with a totally different foil. Along the way a friend offered to loan me a set of G10 Tech Foil Future Fins. The heavy, buttery G10 material felt so....sexy....how could I say no? 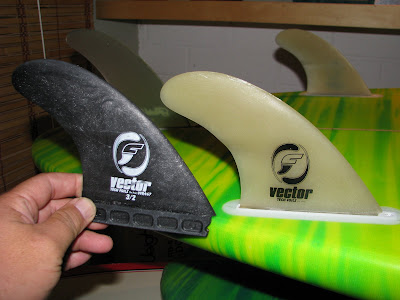 Out came my set of resin Tech Foils and in went the G10s. In case you don't know about the G10 material fins, here's the scoop. G10s are made of really stiff blocks of fiberglass- it's the material used to make windsurfing fins- we're talking stiff here- almost no flex. My friend swears by them and told me that switching to the stiffer G10 version of my fins would be like shifting up into overdrive. I was sold- the fins went in. Here's another interesting bit of info about the G10 version of the Tech Foils- you basically can't get them anywhere (and if you know where I can score a pair of the old, solid base ones, let me know). And they're pricey- I heard of a set going for close to two hundred bucks! 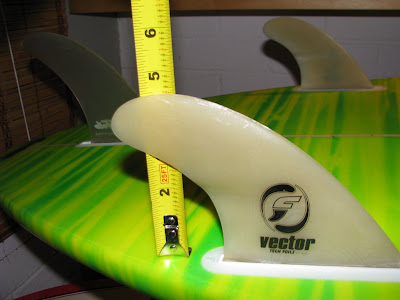 The Future Fins Tech Foils are, frankly, weird fins. The following edge has an extra bend in it and the tips of the fins flare out towards the rail. I've used them on the last two stand up boards I've had and I dig 'em. They produce insane amounts of drive off the rail, the board just zips out of turns- I call it winding up. I'm into them but only when it's a couple of feet overhead and under. When the surf gets bigger and more powerful the fins cause too much lift in the tail and the board gets real touchy. You're tail is planing so much that you need to be careful in the turns- push it too hard and the tail seems to stall out and pitch- not the feeling you want in bigger waves. When the surf get's fast and powerful I switch to more neutral side fins- the standard Futures with a flat inside and foiled outside seem to give me the best feel in good, powerful waves. 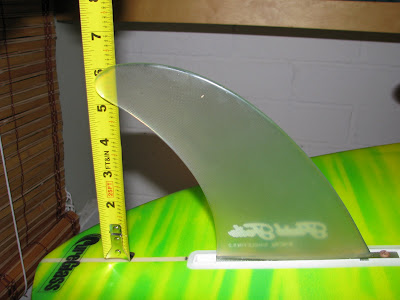 I'm not sure if this smaller center fin is going to give me the drive I like off the bottom. Actually, I don't really know how this fin is going to feel at all- I'm just curious about what it'll be like to go more towards a thruster style fin set up. I did move this one back further in the box to compensate for the one inch drop in size. Once again, by moving it back in the box, I've changed yet another variable. Those are bad scientific methods for a fin study but once you get spinning in the fin vortex, all rational thought goes out the window. I'll let you know how it goes.


Stand up paddle surf lessons in sunny (might as well be an optimist) San Diego. Click here for more information and some delightful testimonials!
Posted by John Ashley at 6:00 AM

Sounds like a sweet experiment! I recently swapped out my "stock" 3.5" side bites for a set of 4.5" ProTeck Performance Flex fins and took my 7" center, threw it in the corner, and put in my 5.5" Fins Unlimited K2D2. Like you, I opted to throw all logic out the window and replace every thing at once.

My first test run was in overhead+ Sunset Cliffs... and what can I say... it was fricken sweet! slamming the board on rail knowing that my fins got my back... talk about a confidence boost! I'll be waiting to hear how your test runs go!

Wow, you really came down a bunch on that center fin! I know you like to really drive that thing down the line so that's saying a lot if it held in for you. Did it get all loosey/goosey off the top?

My reports coming up: 6am tomorrow!