The State of the Go Pro Nation

In case you haven't noticed, I'm pretty hung up on the little Go Pro digital camera. For what it costs ($149) you can't get better resolution or versatility. Critics (a.k.a, non-Go Pro owners) complain that the online SUP world is supersaturated with vain Go Pro user. They've got a point. There has been a flood of self-reflective videos and stills (yep, guilty) but once you start playing with the thing you can't help but get hooked on it. It's serious fun and it's easy to use. The guys at Go Pro did a great job designing this thing. As good as it is though the camera does have a couple of draw backs to it. 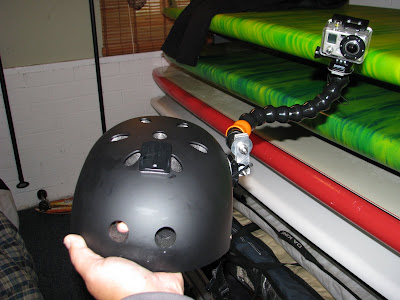 Photo: Here's my latest and greatest fabrication. This one has not been tested yet- but I think it's got potential.

One problem is it's voracious battery appetite. Cheap, alkaline AAAs get eaten up like breath mints at an HA (Halitosis Anonymous) meeting. You're pretty much limited to using expensive non-rechargeable AAA lithium batteries. Two AAA lithiums will last about an hour and a half. The battery life is just long enough to fill up your 2 gigabyte SD card. A pack of four batteries runs about twelve bucks so you're looking at a pretty substantial investment in batteries if you're going to be using this thing regularly.

The answer would seem to be in a set of rechargeable batteries. But from what I've read about these cameras, the rechargeable AAAs barely cover an hour of filming, if that. I'm going to do a little more research on that and will probably invest in the best quality rechargeable batteries I can find. I'd hate to tally up what I've dropped on Energizer Lithiums this far into the game. I'm sure I could've bought another Go Pro. I'll report back with my findings.

The second problem with the little camera is the variety of shots you can grab with the standard, factory supplied nose mount. The forward-looking-back angle gets old quick. The nose shot is like looking out into the night sky at light coming from distant galaxies; you're looking at the past not the future. You can't see what the waves going to do, only what is happening behind you. You can get some cool shots if you're in a super critical part of the wave but for the most part it starts to look like you're dancing a surf inspired version of the jitterbug. 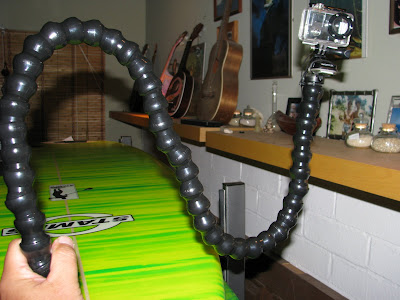 Photo: Three-quarter inch Loc-line. This stuff is so cool- and pretty damn expensive. I keep thinking of different ways to use the stuff- if you like tinkering, you've got to order some up.

A paddle mounted camera gives you more options but in the video mode it's hard to get away from the "pole dancer" syndrome. This stems from the fact that the camera's mounted to the paddle. The point of view down the shaft seems to be motionless. The rider, on the other hand, gyrates around the axis like a "special dancer" chasing a bowtied five dollar bill. It's not a big deal, but it starts looking funny after awhile.

Still photos solve this problem but the limitations of the camera's sequential shooting capabilities can bar you from getting the shot. The camera in still mode only shoots a photo every two seconds so your chance of capturing the Holy Grail of Go Pro SUP photos, the fully throated tube ride, are pretty slim. Unless, of course, you regularly pull into six second tubes in which case your chances of capturing the image improve- but not much.

The third and last major difficulty with the camera is access to the "start" button. Basically, you've got to be able to reach out and push it to get the video rolling. Depending on camera placement, this can be as simple as reaching out to the blade of your paddle or as difficult as extending your arm blindly behind you and flailing around for the damn button while an overhead set drops bombs on your head. Nose mounted cameras need to be started by either jumping off the board and swimming up to the front or by reaching out with the handle end of your paddle and tapping away hoping you'll hit the button when it really matters.

Obviously, you've got to consider how easy it is to start the thing before you decide to where to put it. In my experience the paddle mounted camera provides the easiest "start" position. If I had to make a wish list of improvements, some type of reliable remote start would be number one on the list (but I've heard from a friend who owns an expensive helmet cam system that the wireless remote works about half the time- which sucks).

If I could have it my way the Go Pro would feature a rechargeable lithium battery pack, a remote control start button and a faster still photo rate (how about 3 frames a second) and while we're at it why not interchangeable lenses so you could go from wide angle to regular by just screwing the glass in. I'm sure all of these upgrades would justify the two to three hundred dollar price increase. I can see it now: The modest Go Pro Wide ($149) would metamorphose into the Go Professional Action Video Unit retailing at $399. The camera would feature all the things we asked for, work half as well and be less than a third as reliable all while costing more than twice as much. Which would then give me something totally new to complain about. All of this just goes to show you, some things are definitely better left alone! 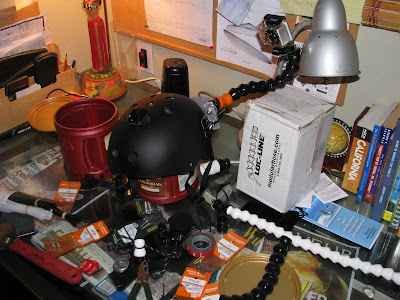 Photo: My little work bench. Can you see the Glock? Paranoia aside, it's amazing what you can do with a hacksaw, some stainless nuts, bolts and washers and some aluminum stock. Mix in some 3M VHB tape, zip ties and five minute epoxy and you've got a fully functioning Go Pro modification unit. Just kidding about the Glock.
Posted by John Ashley at 6:00 AM

where did you get the 3M VHB tape from? I've been looking for that around here...

FYI: I have a gopro and have been using Sanyo Eneloop 4 Pack AAA NiMH Rechargable Batteries. They work great in the cold and last a little over an hour. So I pop a new set in with a new 2GB card and keep recording. It beats throwing away a set of batteries every time you go out. Keep up the good work.

Cool- I'm going to look into those batteries... I'm definitely burning through batteries- and dollars!

Thanks for the tip.

You can get that tape at Autozone- it's actually the tape used to attach body molding to cars- the stuff is super sticky, stick your camera all over the place!

Now don't hold out on me homey- if you get anything good....!

After a week in Catalina and using someone else's waterproof camera (Olympus Tough), I am interested in getting one for myself. Remembered you've experimented with a couple, so I wanted to read through your reviews. Alexis and I are laughing at your pic with the glock. Is IB really that dangerous of a place? Hahaha...