Da Monstah is one big buggah! Ahem, I mean this is one large stand up board. Here's the tale of the tape on this one: length 11'11", width 31", thickness 5". According to the Isle site, G-mac designed this one as a fun-for-the-whole-family board. The board's not just a big, fiberglass and epoxy wrapped popsicle stick though- there's a lot going on here. Let's check it out: 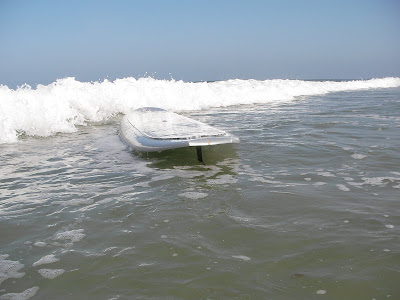 Plenty of tail rocker and five fin boxes. I surfed Da Monstah as a single fin but only because I was too lazy to screw in the fins and ride it as a quad. The board went well surfing fast and responding well to paddle assisted turns. This is a stable, straightforward surfing, big board suitable for anybody looking to get started in wave riding. I didn't get to really let her loose because the surf was so poor but I suspect with the single to double concave bottom the thing's got more up its sleeve than I had a chance to peek at. 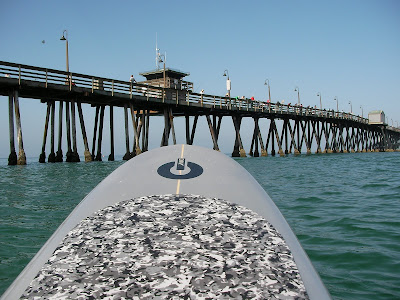 Flat deck pad. Evidently this was specified by the man himself. I had reservations about the grip of the pad in the water. It just seems like it'd be too slick. The pad is very comfy on your feet and I was wrong- I didn't slip off once. The pad does take some getting used to especially if you've only used ridged pads. Like I said, I was a little wary of it so I used an old body boarder trick and put some surf wax on the tail portion of the pad. That did the trick, locking me down like grandma's dentures. The flat deck pad is also really comfortable for prone paddling- try that without a wetsuit on a ridged pad and you'll come up minus a nipple. This one is so plush you could comfortably tandem surf it if you were out goofing around on a hot summer day. 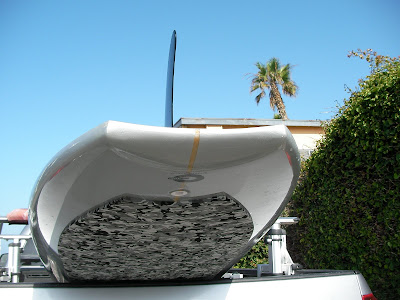 The sliver tail. Take a scoop out of the middle of a big wide squash tail while leaving the rail line intact and what do you have? You guessed it- the sliver tail! All of the G-macs feature this tail design. By removing some of the surface area of the wide tail, you can sink it easier when you're cranking it around. I got to surf it in small 1' - 2' peelers- the board was fast and surfed clean. Definitely nose ride-able. A fun big board. 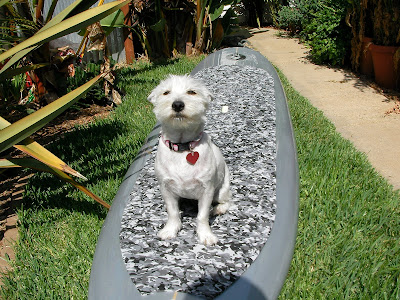 Lilly digs it too! Contact me to demo Da Monstah!

Stand up paddle surf lessons in sunny San Diego- get 'em while they're hot! The water's warming up, the surf is rolling in... get yourself on a stand up board now and learn the skills you'll need to be part of the hottest water sport around. Click here for more information. To book a lesson call John at 619.213.6622 or email john@paddlesurf.net
Posted by John Ashley at 10:24 PM

I sit here contemplating the days surfing and being a standup guy and one of few here in NSB, Fl coming in from one of the best days of surf we have had this year thinking of all the what ifs.

It was bombing today leaned over a bit ago and drained a half gallon of sea water from the old nasal passages. It was thumping at the inlet some 12ft faces on peak standup barrels and we have this little set up inside our inlet that has been working lately like a 150yard right point. Well it was working today and everyone was on the main peak on the beach and me and a shortboarder and a longboarder had this wave all to our selves. It was a bit smaller at 5-8ft faces on take off and some bigger some bombs, but it was sucking up and with realy fast barrely sections. WHOO HOOOOO! I found that my infinity 10' big guy ripper was a bit maxed out for the wave to say the least I was under gunned. I am a pretty good surfer and could deal with the issues of almost sliding out coming off the bottom and the sketchy off the lips where it was realy acting up wanting to skip out. My theroy is it is built for head high solid but yet mushy waves this is where this thing works unreal. Well in todays conditions it was very challenging although I managed pulling in the barrel 4 times coming around and some realy heavy off the lips. I know now I need to build myself a standup to deal with fast sucking up barrely waves that will hold a edge.
What does this have to do with what you are saying about this board well stand up boards are like surfboards you need a quiver to deal with the cituation of the day. I have a 12fter in my quiver and soon a 9'6 and a 11' nose rider and a 8'8" and a 9'4 foiled hard edged board to deal with days like today. Check out our inlet on the new HD cam
http://www.surfline.com/surf-report/new-smyrna-beach-florida-hdcam_4420/

Oh yeah I got the dust off my old shaping gear and am starting to build some stand ups. I will send pics I do classic style with wood inlay and nose and tail blocks and resin pin lines and stuff.