And we're the bad guys?

Snaked! I've been hearing a bit about the growing tension between the laydown guys and us. The major complaint seems to be that we grab too many waves, we're out of control and that we can't surf. I submit that the opposite is usually the case- there are far more out of control prone surfers who given a paddling advantage will capitalize on it by taking whatever wave they can get. I'll go on record that guys on longboards are the worst offenders. 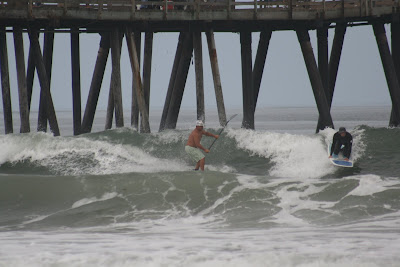 Check this guy out- ripped me off not once, not twice but three times- en el stylo del perro! Now I respect my elders but this geezer showed up with three other friends, all from a north county beach (Swami's) the guy paddles right up to the peak and stinks up the inside after he takes off, falls, takes off and falls... all in el stylo del perro!

And we're the bad guys? Give me a break!

What else do you expect from Swarmies surfers? Fortunately some of the old culture still exists in IB, truly the last of the old-time California beach towns.
Spiderman

I wonder if they were doing it on purpose?
I have noticed a small group of short prone boarders at Cardiff Reef who are intentionaly snaking Stand Up guys for the fun of it. Even if their wave count is 3 or 4 to 1.

I keep telling myself I won't reply to any more of your blogs or sending you any thing else because you seem to be a little to self absorbed, but then you put something out there that is so.... well you won't print it any way, so if some kook, and I don't care what he is paddling around on, if he prone, standing, swimming or walking on water, if he snakes you three times, you are the one to blame. You paddle up to him explain what on your mind, and be prepared to back it up, end of story

Nail on the head... Swarmies... what do you expect.

"I keep telling myself I won't reply to any more of your blogs"... but you just keep on doing it. Thanks for checking out the site- your traffic is appreciated.

Three strikes and your out. Doesn't matter what you ride.

you are so right, goes to show you how full of shit I can be. About sending you pics that I get, I feel so fortunate to get stuff sent to me from the best surfers in the world as its happening around the world, that I get excited and want to share the stoke with other SUP surfers. Its your blog brother, good work

ja the best thing to do is to say nothing paddle away unless the wave off the pier is the only wave around.or say to the offender that was a very dangerous move you just made.if he is a kook he wont even know what the heck your saying.if he is a ass there will be a shouting match that will ruin your session and your day.next time get do the san miguel paddle around works every time some guy falling down after the first time and his dog style is a indication that he aint a surfer.i dont care where the surfer is from all the california beaches are for public use.so next time look at the line up size it up and stay away from the kooks.captneg9

All of you are correct... best option: paddle down the beach. Fuggetaboutit!

Let's Face it a Kook's a Kook's no matter what he's on..
Don't even get me started on the Gigdets