The Human Powered Watercraft Association is in full swing- these are the people who are going to fight to keep stand up paddling legal at beaches near you. Tim Ryan, Legal Advisor to HPWA sent me a little release describing why the association came to be:


" When paddlesurfing was banned from the surf in Orange County very briefly last year, the only reason that it was reversed immediately is because of a paddlesurfing addict ... who happened to be a litigator.  The OC ban, like all restrictions being placed on paddlesurfing (and just plain paddling) across the country arose from the October, 2008, legal memorandum from the US Coast Guard designating the standup paddleboard as a "vessel."  The legal work done to support this designation was and remains embarrassingly suspect.

How to reverse it... how to make sure your right to paddle is fought for... by people who know how to fight "the man?" Sign the petition, write a letter, join the HPWA.  We have thought this through, had our petition vetted by people on the inside at USCG and Harbors and Navigations... and are preparing an industry and user group challenge to the designation.  In order to do this, we need letters from industry and from regular folks... and thousands of signed petitions!  Join the HPWA, sign our petition, go to our site, get petitions signed by your friends, neighbors, co-workers, enemies, and ex-wives, MAYBE EVEN THROW THE HPWA A FEW SHEKELS THROUGH THE PAYPAL BUTTON.

This group is not a bunch of industry folks trying to leverage a non-profit into industry legitimacy... it consists of over a thousand member paddlers... and is directed by the former volunteer head of the Dana Point Boaters Association, with litigator Tim Ryan (me) providing legal and strategic support.  I've got my own gig for paying my rent... and this AINT it!  We volunteer 100% of their time and have invested considerable amounts of our own monies into this gig.


Our first goal is the fight the "vessel" classification that is causing so much damage to our sport.  Once that is reversed, we can work to undo the damage that it has wrought!


We promise to fight for your right to paddle like freaking superheroes on crack!


I believe him! Be sure to click over to the HPWA site and at the very least sign the petition and become a member. I'm heading over right after I post this up... you should too! 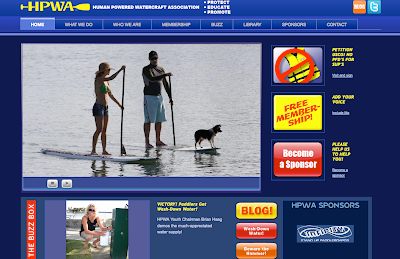