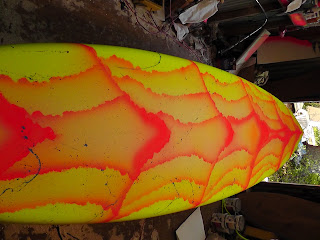 Did a Freak show day glow airbrush on it. I am pretty proud of this thing. I had my rocket scientist buddies from NASA over a few nights doing formulas, slip ratios and some heavy math and measuring and of course beer. I designed and built the blank shaped it from my 20+ years experience and they helped refine some things. I actually have a few things going into this thing that is not on any other race board. By the math and comparing to the Bark 12'6" which I have here as a repair and have been using as a control. The eggheads tell me from their math, I am 20% more efficient and 18% less drag in calm flat water than the Bark Surftech. Pretty cool huh? We shall see this weekend got some racers coming to test and compare to the other boards they all own like the Bark, 404, Infinity ect. Will have some finished pics tomorrow afternoon. It is 2.2lb foam chambered, glassed in all 5.5 S-2 and 1.75oz S-2. Finished laminating it this morning and got the bottom hot coat on it tonight so no fresh pics but I did throw it on the scale. 22.45lbs I am looking at a finished weight with fins and a pad less than 25lbs. I am hoping for 24 or a little less. According to my NASA egghead friends I could do this same board in vacuum bagged full carbon/1.75S-2 glass and finished weight at 17lbs. I figured it at 16lbs but their scientific calculators said 17. 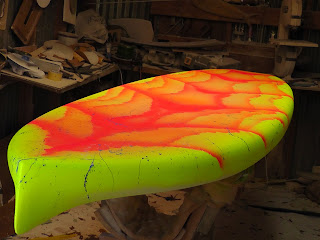 I am pretty excited I have not had a project stimulate my brain in a long time. Last time I did was when I built a 4 seat all carbon fiber, pressurized full acrobatic airplane with these same NASA guys in charge of the calculator. We put a 700hp Walther Turbine in one of them. It cruised 270nts at 50% power. Pretty cool plane. Now we just get Big John up on this thing with his 1/50th hp arms pulling on a paddle we will be in there.... 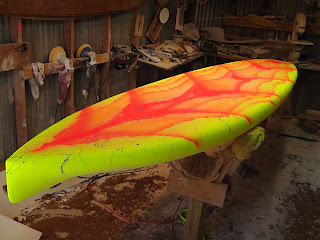 Just saw this post... I'm going to bump it up to the top of the blog because I think it's such a KILLER looking board!!!

Insane paint job and I like the dims on that thing, 29.5" wide- should be steady in the chop... can't wait to hear how it goes.

And when you make the "Coon Dog" we were talking about lemme know!

that board looks insane. please keep us informed of its performance reviews. the bark seems to be a common go to board so its comparison will be interesting.