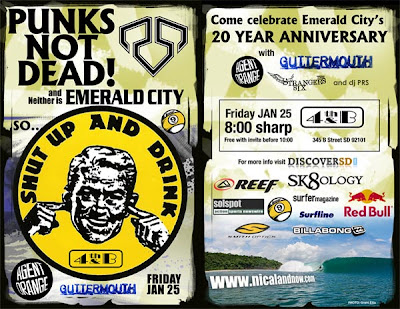 Emerald City Surf Shop is throwing its own 20th birthday party this Friday in the Gas Lamp here in San Diego.

Check out the press release:


San Diego, CALIF -- January 22, 2008. Emerald City The Boarding Source is teaming up with industry leaders to host the most talked-about party of ASR. Billed as, “Punks Not Dead, Neither is Emerald City, so Shut Up and Drink!” the event will kick off at 8 p.m. on Friday, January 25th at Gaslamp’s 4th and B. Among the power-ten-sponsors are Reef, Surfer, Billabong, Sector 9, Solspot, Red Bull, DiscoverSD.com, Surfline, Syndrome, Nicalandnow.com and Smith Optics.

Emerald City President, Larry Kraus, considers it a true honor to be featured among these established names. “As an industry leader, Emerald City is proud to help support this anticipated event,” says Kraus. “Our sponsors have gone to great lengths to restore the true essence of punk as an influential symbol of action sports. Undoubtedly, this is going to be the highlight of ASR 2008.”

Thanks to Rob Molt of Sector 9, the lineup includes punk legends, Guttermouth and San Diego’s own The Stranger’s Six. As pioneers of the skate-punk scene, Agent Orange will also be featured in the evening’s entertainment. This 1980’s power trio first gained recognition with the acclaimed song ‘Bloodstains,’ now featured on Tony Hawks Pro Skater 4. Spinning punk favorites, DJ PRS will be throwing down hits from Social D, Angelic Upstarts, TSOL, Stiff Little Fingers and many more legendary artists.

Emerald City will also be rolling out the red carpet for the some of the industry’s top athletes and musicians. “It’s the return of Shut Up and Drink,” says Kraus. “Our tribute to punk not only embraces the freedom we represent, but it also unites those who have greatly impacted the world of action sports.”
Launched in 1988, Emerald City is famous for its industry parties, which often drew in over 2,000 fans to yearly events. Now, twenty years later, the board shop is reawakening the past by taking over 4th & B's 21,000 square foot facility.
The ten sponsors intend to fully capitalize on the venue’s recent remodeling, which includes a private mezzanine, a state of the art sound system, new projection screens and sky boxes. Guests with personal invites may enter free before 10 pm. For more information visit www.discoversd.com.

Should be a really fun, and the timing's right- you might as well drink up because you're not going to be surfing Saturday morning with all the rain that's coming. I'm stoked to see the bands and do some people watching. I'm going to be there in the most ridiculous Aloha shirt that I can find; see you there!