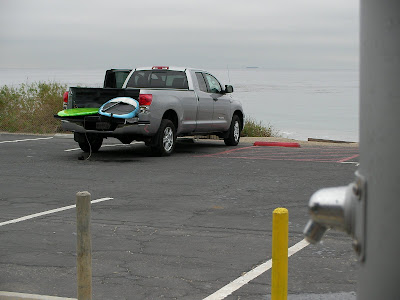 I had such high hopes for today. The forecast was for North-Easterly winds, a building swell and a big fat tide in the morning. The timing was perfect, it was all going to happen on a weekend and, as you know, I've got this hot new board that's dying to be ridden. I was imagining a bright blue, offshore, winter's day with fun, fat high tide waves all going off right down the street.

I should have known things were getting weird. Chad and I hopped in for a quick paddle on Friday and just as we made it outside, the northwest winds ramped up and pushed a chilling blanket of fog right over us. It wasn't a gentle fog either, the stuff was running with a pretty stiff little breeze, strong enough to push whitecaps right through to the beach. That night I read that predicted Santa Ana condition was being downgraded. Not a good sign.

For me, it ended up being one of those frustrating days when it almost all comes together. There were some big waves out there, breaking on the far cobble reefs- they looked fun, maybe a little fat on the high tide but almost impossible to paddle out to unless you didn't mind having your head pushed through your board by the eight foot shorepound. The shorebreak was also being gashed by a sideshore inside current that was racing along the gutter carved into the beach by the night's wave action. Standing and paddling would have been impossible. The only guys on it were a jetski tow-in team who powered down from the Bay.

And then, as if to finalize the surf-decision, there was once again, the fog. Just like Friday, as if on cue, the gray swept in and chilled us to the bone. It blotted out the surf and threw a northwind chop on top of everything. For me, that was it, I was done. But tomorrow is another day and maybe if I don't expect so much I'll appreciate whatever I get; maybe that was today's lesson.

By the way: There were many people who scored unreal sessions today. A good friend up near Ventura reported sunny, seventy degree weather, light offshore winds and head high peeling right handers at "the spot" (don't try, I'm sworn to secrecy). Indeed the surf phone (my new fangled cell phone) was assaulted with reports of, "Dude, it's going off at XXXXXX- you should've seen the barrels at XXXXX!" You know how it went for me. How'd you do?
Posted by John Ashley at 9:05 PM