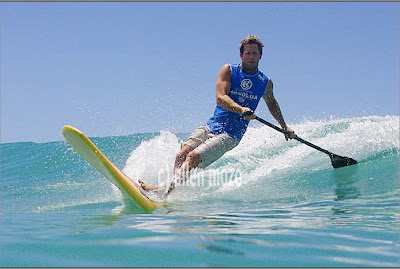 One of the best thing's about paddle surfing is that you don't need to paddle more then an hour to get a serious workout. Today, I hopped in and paddled down the beach and back, surfed a few waves each way and was dry and washed up in two hours. Now as I sit here I can feel that paddle in every muscle of my body. Kind of makes insomnia not an option.

The weekend's swell has definitely dropped off- there's still a few overhead waves rolling through but it's nothing like this past weekend. The forecast calls for diminishing surf by the weekend- hopefully we'll have something at least knee high to keep us going. I try to make it a point to paddle at least twice during the week even if the conditions are messed up. Partially to convince myself that I'm not a weekend warrior but also to stay ready for when it gets good. Chad and I jokingly call it "sharpening the saw". We never really understood what Covey meant by that in his "7 Habits" books (our big bosses are really into this stuff) but now that we're paddling we're convinced he was a surfer. We're keeping it sharp all right, one wave at a time.

If there's no surf, then this will be the weekend to paddle out to Cabrillo Point. Tex and Olivier have paddled this twice and they are stoked on it. They even paddled it last Sunday and scored some waves out there. The boys have been launching out of Point Loma and paddling an hour out to the point- a little bit of a haul but the scenery is pretty nice and your protected by the point from the prevailing wind. I'm also toying with a nice six mile downwind run from Coronado to the Imperial Beach Pier or a run from Torrey Pines to Scripps Pier. If the high pressure sticks around and the surf is nil then this will definitely be the weekend for an alternative adventure.

Speaking of alternative adventures. I really think that this is what stand up paddling is all about. Finding those hidden surfing adventures that are out there, right in front of us. It's my assertion that a small isolated wave, found by a long paddle and surfed with just a couple of friends is better then a really good crowded day at a name break. So I'm going to find some paddle surf adventure this weekend. I'm going to cruise and surf. I'll seek out the unwanted wave and the overlooked peak- who's in?

Photo Above: Scott Bass, a guy who's kept the saw pretty sharp. Photo: Mozo
Posted by John Ashley at 8:26 PM

J.
I m game! I ll do Point loma, out to sea and downwind to the Hotel Del. Unless the surf is good at the point.
I surfed Up here this Am at sun rise, again by myself with some good surf left for sure but cold! really cold! I was looking for Stamp, but no show. Tomorrow it;s on again! Sun rise session, makes my day at work much better.

Cool- I've got a three day weekend- I'm into paddling the point! I'd like to do the round trip that you and Olivier did- that sounds fun- there's even supposed to be a little south in the water which could be good there- if not let's go around the corner to a couple of the other spots!

Way to charge it pre-work... cold here too. Call me this weekend.