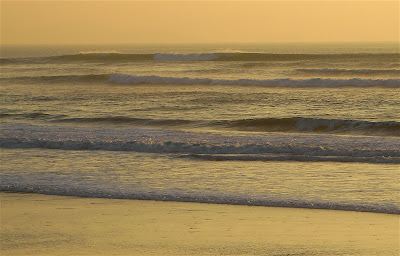 Sorry for the hold up on the report, had a little computer/internet mix up that put an end to all this blogging madness for a couple of days.

First off, the crime went as planned. Only hold up was my missing wallet, and an empty tank in the truck. I soon remembered that I had given it to my wife to hold onto for me the night before. The wallet was safe in her purse, with her, at work. Ever the resourceful criminal (in grom days did you ever tilt the lawnmower for a gallon to feed the Squareback?), I started digging through the Folgers can and quickly gathered up nine bucks in quarters. Thirty six loose quarters makes a big handful and when I dumped them on the counter at the local fuel shop I don't know if the guy was too stoked. I am shameless though when it comes to a surf mission and the line that formed behind me while the quarters where counted didn't even bother me. I had my two and three quarters gallons and I knew it'd get me there and back. I was on it.

The surf ended up being super fun. Pulling up I made a quick decision to leave the main event wave to the six guys who were already on it and paddled over to the little wave to the north that nobody ever bothers to surf. The tide was dropping and a nice, though mushy and sometimes sectiony little left was peeling off of it and closing out onto the eel grass on the inside shelf- a better right would sometimes pop up but it was a rare bird so I focused on the lefts. A funny observation: Nobody wanted the little non-spot wave that I was on before I paddled out to it, but as soon as I started catching waves four other guys paddle across the channel to me. Since they were on boards way to small and slow paddling to catch the wave at the only entry point (this wave has a little blip in it that wedges up outside enough for you to catch but then immediately backs off, so if you can't glide across the flats with speed into the wall section, you're going to end up taking off into a closeout- thus a perfect wave for the stand up board and not so perfect for a 6'3" chip on a marginal day) I didn't leave. A couple of the guys were into it too and wanted to someday try out stand up paddling- when will they ever learn?

The board pretty much blew my mind. The often discussed trade off in performance and paddle -ability was evident, pulling the tail and nose, decreasing the width an inch and reducing the volume did take a toll on the boards stability. The result wasn't drastic and I'm looking forward to improving my skills to match the board.

Surf-ability is where this board really shines. I feel like I'm riding a nine foot longboard. While I'm still dialing in the board and recalibrating myself to surf it, the thing is very obviously made to draw clean lines and carve sweet turns. I wrapped three cutbacks easily back into the foam and rebounded off it like a ping pong ball- amazing the difference a little refinement can make in a board- the thing was a totally different animal then the Mahi I.

The biggest surprise was surfing it right. Since I'm screwfoot, I tend to like lefts on these big boards. On other boards, I really had my hands full with all that rail in the water and had to be happy with a little kick turn into a backside glide, really very linear surfing. I was very surprised then to snag a little right, slip down to the bottom and then crank a backside bottom turn back up into the curving wall ahead. Wow! The thing wants to go top-to-bottom- so I let it. On that one wave I ripped three carves going right. Stoked! On one top turn I got my back foot into it and felt the tail come around as I snapped like Mick Fanning.... well maybe not like Mick Fanning... but I did get that little push off the top you get with a backside top turn on a shorter board and I have to say it felt GOOD. I can't stress enough the importance of hooking up with a shaper who SUPs and who has an open mind, Tim Stamps has made me a board that is really something special- give him a call he's worth talking to.

Now all I can think about it tomorrow. If you're on the California coast and you got a look at it yesterday you know what I'm talking about. All the dominoes are in line, I'm just waiting for that first little push....

Coming Soon: His name is Butch, he's from Maui and he's a front row witness to some of the hottest boards being put together- more coming!
Posted by John Ashley at 3:14 PM

The board sounds awesome, I can't wait to see some vid. Glad to hear the caper went off, and I love the Spicoli gas buy. That same technique saved last call from certain dryness at the Barley Neck on many a night.

Desperation is the mother of all invention! Great minds think alike.

Nice report on the new board. Interesting your comment re giving up some on the paddleability for the surfability. I SUP surfed with a guy today (Surftech John) who works for...Surftech?...and has access to the whole new line of House shaped Lairds. He commented this morning that he sees no value added in going less than 28" in width.

I'm thinking the M2 at 28 3/4" is just about where you want it to be. It makes sense to me that you're getting lot's of surfability out of the shorter length and less swing weight, and refined plan shape than going too narrow. John is an excellent SUPer and he had his hands full (feet full?) just balancing out there today in the big swells and rolls on the 10' X 27" Laird SUP.

Now get that big center fin out of there for something short and sexy and you'll be doing 360's in the barrel...(heh, heh).

Hope you're getting some of the great waves we are to further test it out.

I really like the new board- it's a whole new deal for me and definitely something to grow into.

I tend to think I've reached as small as I want, or more importantly, need to go for quite awhile. This board really has the feel I was looking for.

I also think that once you start going smaller you're going to really start losing the paddle range- which is what I like about these things.

The new molded boards are all coming in really narrow- I don't see the point in it really- how hard do you really want to work to improve performance on what is still going to be a HUGE longboard?

So at this point performance is definitely not limited by my equipment.

As far as fins- you know my feelings about them. I did put an 8" fin in there and I just didn't like the feel of it- I like to PUSH on it. Even with it, the board is super loose. And once again, check out Tyler Hatzikian in One Ca Day absolutely RIPPING a Hansen 50/50 circa 1960 with a giant glassed in D fin sitting right on the tail- pretty amazing.

Sadly, I didn't even get in the water here today!!! I checked it from 7am all day long and it ended up being just a weird situation down here- not many surf opportunities. But tomorrow is another day and I'm on it again bright and early!

I agree with you and Gary on the performance issues. Why work so hard by going to narrow on the shapes. The idea is to have fun, especially for a weekend warrior like me. I admire those guys pushing the limits and who are on the water everyday, but that is just not my situation. While it seems narrow is in, I think I saw a post on the SUZone, where someone started thinking differently, short thin board, with wide dimensions!

Love the M2 review! Seems to have the dims that would work for me. To tell the truth, I'm scared to go below 28.5" and under 10' on a board. I'll keep trying different ones out (thanks to DW!).