Got It: Satisfaction Found! 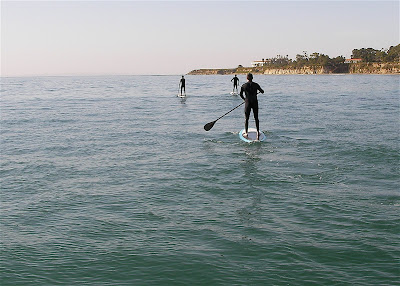 Had a great day surfing the stand up board today. Started off looking down the street but once again the size and potential for shore break dismemberment were pretty high- so the call was made to head out of town and find a spot that would wrap it and clean it up. We settled on a point to the north that can hold almost anything. It was a good choice, the point was handling the diminishing swell and serving up fun, head high (maybe a couple of feet overhead) waves that were sectiony and a bit fat but fun nonetheless. Even better was the peak inside the point that would reform into fun, long lefts.

Highlight of the trip: The friendly "locals" camped out in their hovel shouting encouragement to the six or so SUPers out at the point- I think they were trying to alert us to a navigation hazard, something about "getting out of here"? Those guys were cool, even though they can't surf they did offer us some free surf wax by smearing it on our window (but there is an "e" at the end of the word "home"). They even offered to show us their rock collection by tossing it out at us. It seemed like we'd get a chance to have a nice heart-to-heart with one fellow but he must have been in a hurry to get to the Pabst Blue Ribbon because he wouldn't stop and have a proper face-to-face chat. He did mutter comments over his shoulder as he scurried away which I thought was very thoughtful considering how important it is to hang out in a trash heap on a sub-par point with a bunch of tweaker, retread losers. I mean, tradition is important right?

Really though: It was a fun day with some good friends and I did get to meet two solid La Jolla paddle surfers (nice to surf with you Dan and Mike) who were taking off deeper then anybody out there and just handling the place. The SUP thing is definitely spreading- today I saw more paddlers in the water then anywhere I've been. As our numbers grow and tension builds it's going to be more important then ever to surf considerately- have fun out there and play nice.
Posted by John Ashley at 9:17 PM

There are two ways to go about this problem with the trash talking lay down guys. We can get in there face and call them to the beach or we can try and talk to them and make them understand we are here to stay so lets work something out. My goal is to try and be nice and talk with these guys. Try I said!