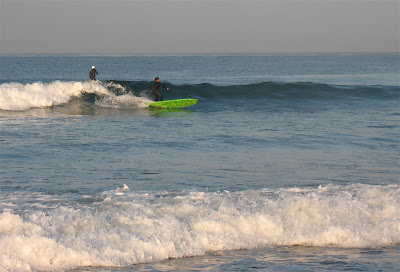 I ended up breaking down and getting a cell phone. Not because I'm a cheapskate but because in my line of business it's nice to be a little anonymous, a moving target. It wasn't until I realized that there just aren't any pay phones around anymore that I decided it was time to be pick one up. And also because I kept getting busted for forgetting things at the supermarket, these things work really good for that.

I'm a real amateur with the thing- I don't leave it turned on, I can't figure out how to add calls to my phonebook- you know, important stuff like that. I do like it though- you're suddenly in contact with... everybody. Everybody's got one of these things. I pass my number out to my surf contacts and call this thing my surf phone. My employer will never get my number- wouldn't that be a nightmare?

It's Thursday night now and the phone's been warming up. Plans are being laid for weekend surf/cruises. I've got Sunday and Monday already planned out- and things are pretty exciting (I'll post 'em up, don't worry). I think I've got my place in surfing figured out I'm calling it "Filling the Holes" and I'll tell you about it later. Hope you're out there getting into something fun.
Posted by John Ashley at 7:24 PM

Bro, I know the plan for Monday, but don't hold out on me. What is Sunday?

Was that pic from today?

Nope- not a pic from today, although Marcos told me it was good this morning.

As far as Sunday, call the surf phone!

Mr. Ashely the surf phone only works if its turned on.... so you might what to take it out of the truck every now and then and not have it turned off 24/7.

J
let switch our plan, and do the paddle on Sunday. I got a couple guys who are into it but will be working on Monday. We ll do the paddle tomorrow with a small group and monday we ll hit up XXXX with just a few.
Rally up the troops and lets invade the point!