The paddle cam mount gives you the most options for snapping pictures or shooting video with the Go Pro camera. By putting your paddle in different positions, you can snap all kinds of photos from many different angles. Don't be surprised if a few of your photos blow your mind- especially when you get creative with where you move the camera and how you hold the paddle. 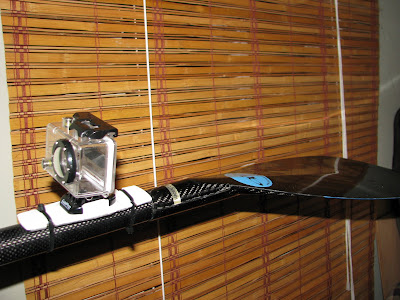 It's also the most convenient configuration for triggering the camera. Since the housing is only an arm's length away, starting the camera is simply a matter of reaching out and pushing the button- which is much nicer than having to jump off your board, swim to the front (or back) and start (and stop) your Go Pro. In this post I'll explain how I set up my paddle cam mount, hopefully you'll have as much fun with it as I have. 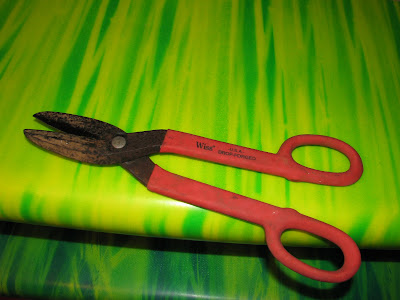 To make the paddle cam mount the quick and easy way, you'll need a couple of tools. First, if you don't have a pair of tin shears like this, go buy some. They're only a few bucks at Home Depot and you'll end up using them on all kinds of projects- they're in my top five list for favorite hand tools. Shears like these will make cutting the white, self-adhesive, Go Pro nose mount easy and safe. If you don't want to drop the bucks for shears you can probably use a sharp serrated knife but be careful, and don't let your wife see you cutting plastic with her good knife! 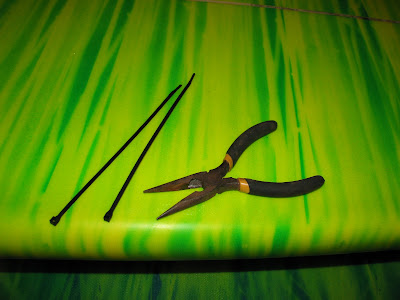 Next, you'll need two or three zip ties. While you're at Home Depot buying the shears, walk over to the electrical department and buy a bunch of zip ties- they've got a million uses. A good set of needle nose pliers will come in handy for snugging the ties up and for nipping off the tail once you've cinched them down. 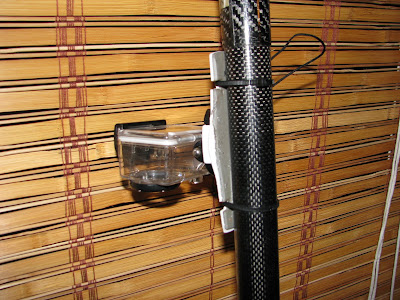 Okay, the first thing you're going to do is mentally come to terms with the idea that you are going to destroy the white, self-adhesive, nose mount that came with your camera. Don't worry, you can always buy another one (Go Pro has replacement kits). Rest easy in knowing that, with a little practice, you'll be able to get better nose-type shots with your paddle cam then with that disk mount. Plus, it looks dumb on the front of your board and it'll probably fall off someday anyway.

Here's what you do: Take your shears and cut down along each side of the camera mount on the white disk. What you'll end up with is a thin strip (a little wider than the shaft of your paddle) with the self adhesive tape on one side and the mount on the other. 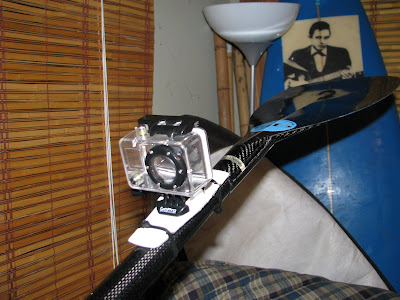 Next, make four notches in the modified white disk/strip. Each set of notches should be about an inch from each end of the disk/strip. The notches will anchor the zip ties to the disk/strip once you've snugged them around the shaft of your paddle.

Now peel the backing off the tape and stick the disk/strip to the shaft. I put my camera about four inches above the neck of the paddle on the powerface side of the blade. Slip two zip ties around the shaft and snug them up nice and tight- be sure that they are seated in the notches that you made in the disk/strip.

A couple of paddle cam tips:

1. If you're disk has lost some of its tackiness and starts slipping around you can stick some 3M VHB tape on the back of it and reapply it to the shaft of the paddle. You can buy the VHB tape at an auto parts store (I go to AutoZone), it's sold as "Moulding Tape" in the car body section.

2. I use a third zip tie to attach the camera's lanyard to the shaft of the paddle as a safety line.

3. Nope the camera doesn't interfere with paddling at all. As a matter of fact, after a while you don't even realize that it's there.

4. For Californians, get up early and shoot when the sun's coming up- you'll get much better shots with low angle light. This is the magic hour- good stuff happens early!

Now get out there and send me some good ones!

Stand up paddle surf lessons in San Diego. Come paddle with me in beautiful, flat water conditions. If you've been thinking about learning how to stand up paddle, now's the time to do it! Summer is right around the corner. Give me a call at 619.213.6622 or email me (john@paddlesurf.net) and I'll get you out and paddling. Click here for more information about lessons and for customer testimonials.

Email ThisBlogThis!Share to TwitterShare to FacebookShare to Pinterest
Labels: Go Pro Digital Hero Wide, How To

john you have way too much free time.oh yes ill need some help.captneg9.

Great article... thanks. Going to give it a try when I get back to Honolulu.

I'm not sure about the older cams, but the new hd ones come mounted on a black square for display... that may be a substitute so one doent have to cut up the white disc. I've done a couple things with it and it just as strong from what I can tell.

Thanks for posting these instructions. I just posted up results from my version on my blog. I took the advice from Anonymous above, and used the black plastic display mount instead of the white nose mount - so far it's worked perfectly. My only difficulty has been finding 3m VHB tape - I've visited 6 hardware and auto parts stores to no avail. Guess I'll turn to the internet next...

I also plan to use the black mounting square that came in the display case.

Instead of the 3M tape, I am planning to use a strip of 1" velcro with adhesive backing so I can remove and reattach the camera to the paddle.

I will also use the tie wraps to secure the mounting base to the paddle when I want to use the paddlecam.

GoPro makes a mounting bracket for handlebars that works great on paddles too. I use it all the time.