Battle of the Paddle: Tips and Observations

1. The parking lot at Doheny State Beach get's filled up fast- get there early (there was a line by 5:45am) and follow somebody who knows (I caught sight of Infinity master shaper Steve Boehne's van as he was pulling in and followed him right to the sweetest spot on the lot- thanks Steve!).

2. The Elite race is gnarlier than you think. There was, for example, a turn buoy set inside the surf line ten feet from a concrete and rock jetty. Many racers were steam rolled by avalanches of carbon fiber raceboards tumbling at them in walls of whitewater- trapping them against the rocks and the jetty. Heavy. And highly amusing. 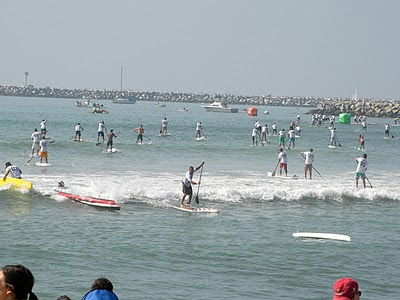 Photo: Way gnarlier than you think.... especially on the legs in and out through the surf zone. Here comes Kiwi (2nd Place, Mens Stock 40 - 49 Division in the Distance Race) looking for a safe place to ditch his board.

3. Danny Ching is faster than you think (and the boards with his new label, 404, look GOOD).

4. Bring binoculars- stuff happens hundreds of yards away, you'll want to see it. 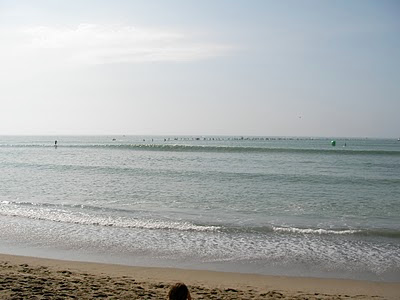 Photo: Binoculars would be good about right now. Here's the Elite field working its way through the far marks. The commentators were good but it would've been nice to scope out what was going on out there. Next year... JumboTron!

5. If you're racing in this thing- practice paddling in and out through the surf. Believe me.

6. Doho's got some fun waves- and I think this event is the one time where the whole beach is opened up to stando surfing. Get there early and sample some otherwise forbidden waves- and even better, demo one of the billion stand up boards that are there for you to try out.

7. Doho's also got the top .1% of the world's DNA walking around in bikinis- bring your sunglasses. 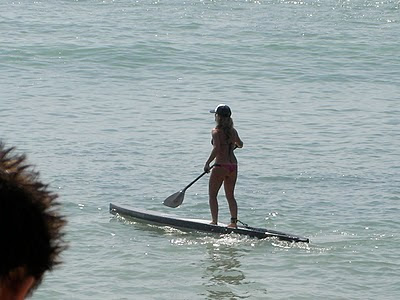 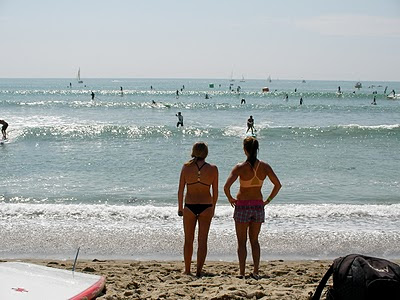 Photo: Lot's of great boards and paddles, waves and races to watch.
8. Enter the Open Age-Group race. It's a fun race with limited exposure to the surf (you'll need to go out and in through it one time) and cool trophies if you happen to place in the top three of each division and age group. This year there were over 300 folks of all ages and abilities out paddling in the Open race- which means the chances that you'll be last (everybody's secret fear) are pretty low.

Photo: Here's my result... yep, that's me: John Ashley Ashley... guess who doesn't know how to correctly fill in the name fields on an application? But fifth in my age group for the surfboard class (out of 26) had me pretty stoked.

9. Gerry Lopez is probably one of the nicest surf-celebrities out there. If you only go to shake the man's hand and have a little chat, it's worth it.

10. It's a long day- so bring a chair, some food and some water. Unless your upcoming race has got you so nervous food is the last thing on your mind. If that's the case, just sit back, enjoy the day and visualize yourself kicking some ass out there.
Posted by John Ashley at 10:30 PM

Sounds like a rockin' great time. Maybe I can put it on my schedule for next year. One of my Colorado peeps reports an encounter with a great white while visiting for the BOP.

You definitely should sign up next year- it was really fun and cool to be a part of such a big event.

No shark sitings on my part and I surfed DogPatch two days in a row- by the way, your trip is coming up- hope you're getting fired up!

Ashley John Ashley, you are turning into quite the SUP racer. Nice result!

Thanks! Don't worry about looking in your rear view mirror though- I'm more like the tide- a slow creep versus a tsunami-like charge...

Keep me posted on your races up north- would love to hear about them.