Demolished, scraped- dust. Odd when such a big... thing... just suddenly vanishes. It's the absence that gets you. A guy wondered, "Will it affect the surf now that it's gone?". Which I thought was pretty funny at first. How could a building on land affect a wave out front? Dumb.

But then I thought about it. Maybe it did affect the surf when it was here- could it's absence change things? If it's blowing offshore, and the hotel is gone, maybe the hotel-sheltered section will stand up longer, change the bottom, put a corner out there. Maybe the building disturbed the wind patterns, put odd little swirling eddies out there that broke up the straight west swells and gave us some thing to ride. Who knows? Only time will tell. 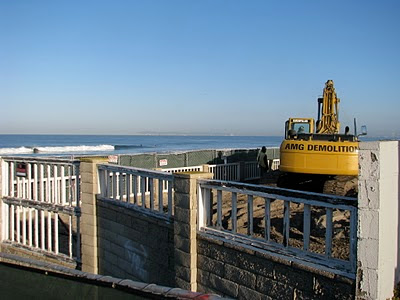 Photo: Like big insects chomping away these big demo-dozers tore into that old flea bag and took it down. How's that little left breaking in the spot we used to call the "Slot" (the lineup off the north edge of the hotel).


Clip: Action! I'd pay ten bucks a beer if they had an oceanfront pool/bar that you could post up at after surfing, order a hamburger and drink a freshy in the sun... it's that easy- let's see if they get it right.
Posted by John Ashley at 7:11 AM

The Surfside 6 may be dead and gone but never forgotten! There has always been good waves in front of the old fleabag, and us older grumpy guys can vouch for that. I still think that it has more to do with the loss of sand on the bottom and the beach more than anything. Lets hope those Santa Ana winds come through and see what happens?

GENIUS about the name of the bar! Or is that going to be the name of another local watering hole?

Funny- but what do you want to be we won't get something cool like the bar/pool/restaurant?

if chilean miners can be extracted from the bowels of the earth...ib locals might get a cool bar/pool/restaurant...miracles do happen...but i ain't gonna bet on it, brother!

Whoever Anonymous is- you're cracking me up. And you're right on the nose with that prediction... I ain't betting on it.

When I first started surfing, long ago in the dark ages, there were some old wooden piles (spelling?) from an older pier that would sometimes show in front of the motel. I suspect that what is left of these still have an affect in the hotel area. The "new" pier made some distinct bottom changes both north to the jetty and south to Coronado Avenue over about a 3 year period when it was first built.
Spiders Brother